The College of Science celebrated research and administrative excellence at its 2018 Fall Faculty and Staff Awards ceremony and reception on October 11.

Dean Roy Haggerty delivered welcome remarks, sharing his priorities for the upcoming year in the areas of research and innovation development, student recruitment and retention, revenue growth for the College and diversity, inclusion and justice.

In keeping with the College of Science’s key objective to spur research and innovation, Dean Haggerty announced three new awards to support fundamental discoveries and collaborative scientific projects with the potential for substantial social impact. The Science Research and Innovation Seed Program (SciRis) provides funding in three stages for high impact collaborative proposals that build teams, pursue fundamental discoveries and create societal impact. The awards range from $10,000 to $125,000 for various stages of the proposal.

SciRis-II Award will provide up to $10,000 for an individual faculty who seeks to establish or augment research relationships with external partners, either inside or outside of Oregon State University, in academia, industry, or other organizations inside and outside of the United States.

The Betty Wang Discovery Fund, recently established by a generous endowment of $750K from the estate of Samuel Wang, will grant one or more awards to maintain state-of-the-art laboratories to advance fundamental discoveries in the basic sciences.

Hearty congratulations to these award-winning faculty and staff who were recognized for their outstanding achievements: 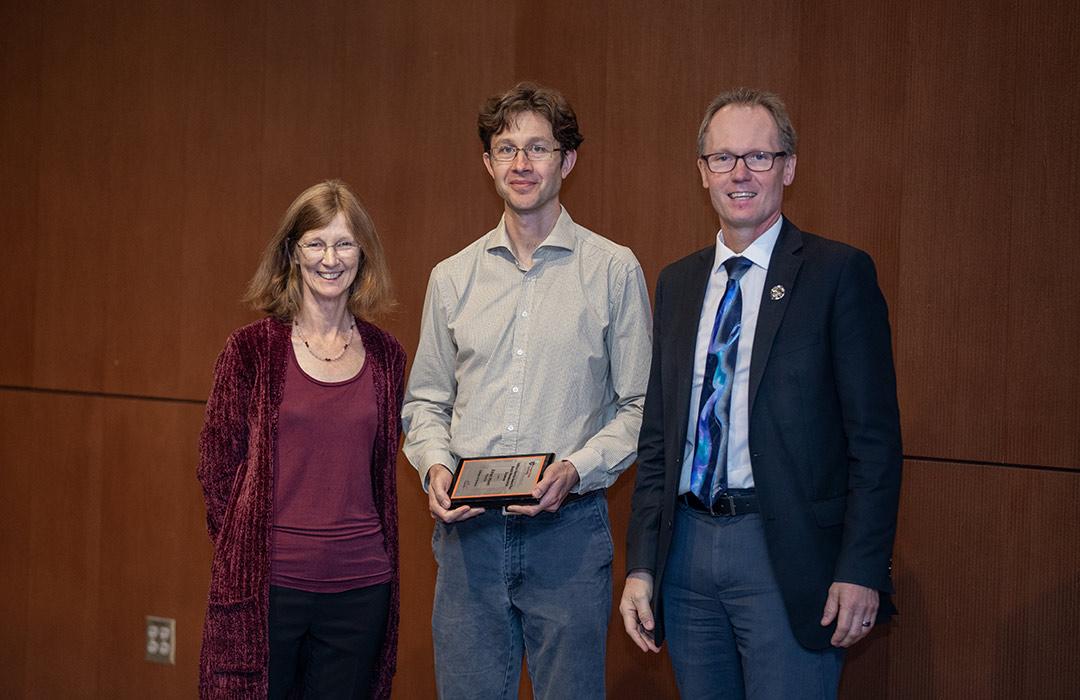 Ethan Minot, associate professor of physics, received the Milton Harris Award in Basic Research for his impressive accomplishments as a scientist. At Oregon State, Minot has built a world-class materials physics laboratory for the study of the structure and properties of carbon nanomaterials and devices for nanoelectronics.

His research at Oregon State has pushed the limit of fundamental properties of nanoelectronic devices, which have a broad range of applications to biosensing and solar energy harvesting. Some of his achievements are: identifying the fundamental noise mechanism that limits the performance of graphene biosensors in liquid environments; becoming the first to electrically generate and detect single point defects; reaching a new level of control over point defect chemistry; and other pioneering advances in the development of high-quality nanodevices and biosensors.

“Using the exceptionally strong, flexible, stable and sensitive electronic materials Ethan has demonstrated that the carbon-based nanodevices can be intimately interfaced with biological systems. His research impact extends beyond the science he has produced. Ethan’s group is a highly-prized destination for graduates and undergraduates alike,” said Professor of physics Janet Tate.

Minot’s graduate and undergraduate students have gone on to successful careers in academic and high tech or medical tech sectors. His versatile research activities have led to many high-impact publications. During his tenure at OSU, Minot has published 34 refereed articles in prestigious journals such as Nano Letters and Applied Physics Letters. 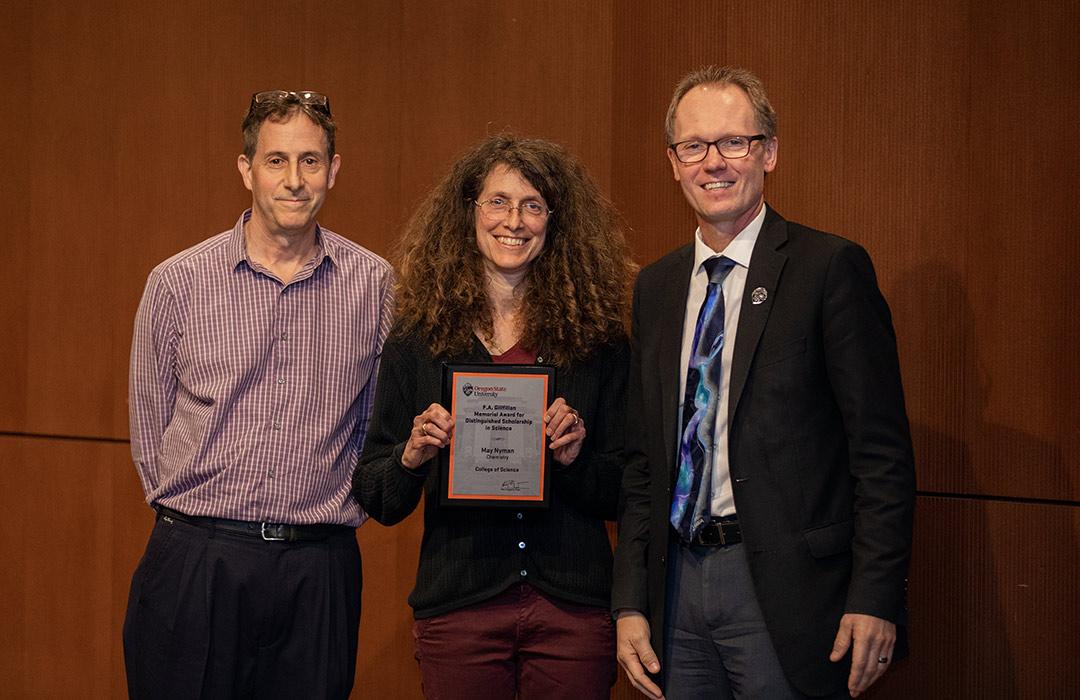 Chemist May Nyman with Michael Lerner (left) and Roy Haggerty

Professor of chemistry May Nyman was honored with F.A. Gilfillan Award for Distinguished Scholarship in Science. The Gilfillan Award honors a faculty member in the College whose scholarship and scientific accomplishments have extended over a substantial period of time.

A leading scientist in the areas of metal-oxo cluster chemistry, X-ray scattering, aqueous ion-pairing and nuclear waste chemistry, Nyman joined Oregon State in 2016 after a distinguished career at Sandia National Laboratories where she developed new sorbents and other waste treatment technologies for nuclear waste management. Her work on Cs-139 removal technologies led to the licensing of a sorbent that is currently used to treat contaminated seawater at the failed Fukushima Daiichi nuclear power plant in Japan.

At Sandia, Nyman developed a powerful and effective sorbent for removal of strontium-90, plutonium and neptunium from cold war era nuclear wastes. The sorbent was commercialized and then produced at the Savannah River site for real world waste treatment. Through her work with applied chemistry technologies, Nyman made tangential discoveries that ultimately led to the development of an entire new class of polyoxometalates (POMs) that she termed the polyoxoniobates (PONbs). These new POMs opened up the field to new discoveries and applications that include the potential development of a new class of nerve agent degraders.

At Oregon State, Nyman has developed expertise solution characterization of clusters using X-ray scattering. She has now become a world leader in applying this technique to clusters. She continues to be an international leader in the field of POMs, PONbs and other metal oxo clusters formed from elements across the periodic table. Her research group’s latest discovery and paper on this topic show how PONb cluster geometries and nucleation are changed simply by the presence of alkali metal cations.

“This latter work is also one example amongst several from the Nyman group that suggests a revolutionary concept – that the standard Pourbaix diagrams collected and widely used by materials and chemistry researchers for several decades may be not be accurate without careful consideration of the electrolytes in solution,” said Michael Lerner, Head of the Department of Chemistry.

The broader impact of improving the model used in such fundamental chemistry is significant – aqueous chemical processes such as geochemical weathering, corrosion and energy production in fuel cells may all be improved. Moreover, through these studies, Nyman’s team learned how to make very high concentration Nb solutions with a neutral pH that can be used to deposit niobate materials for different energy applications. This future work can lead to new functional materials deposited by ‘green’ processes.

Nyman is a leading member of the materials science of actinides program at the Department of Energy’s Energy Frontier Research Center program—her roles include developing uranyl peroxide clusters for fundamental actinide science applied in the nuclear fuel cycle, and training the next generation of actinide scientists. 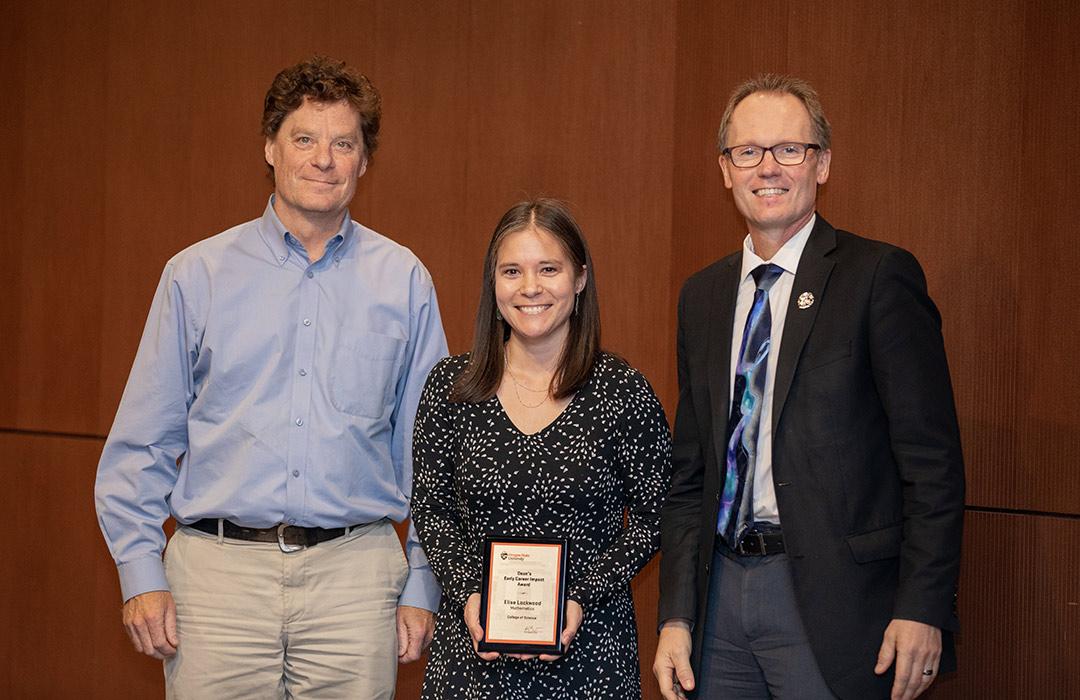 Elise Lockwood, associate professor of mathematics, received the Dean’s Early Career Impact Awardfor exceptional achievement in research and education by an early career faculty member. Lockwood has achieved international distinction as a researcher in mathematics education, specializing in Research in Undergraduate Mathematics Education (RUME). She is described as the “top young scholar” in RUME.

Lockwood’s prominence in the field is evidenced by her winning the 2018 Annie and John Selden Prize of the Mathematical Association of America, which is given to the top early-career mathematics education researcher in RUME. Her research focuses on the practical and theoretical aspects of the teaching and learning of combinatorics, a field of mathematics that connects with probability, computer science, and many diverse areas of science.

“Led by her internationally recognized achievements in research, Dr. Lockwood has assembled an impressive array of professional accomplishments that excels in all dimensions,” said Bill Bogley, Head of the Department of Mathematics.

Lockwood was awarded a five-year National Science Foundation CAREER Award—NSF’s most prestigious award for early-career faculty— for her project on developing undergraduate combinatorics curriculum in computational settings. The project focuses on the use of computational resources to help students develop as combinatorial thinkers. 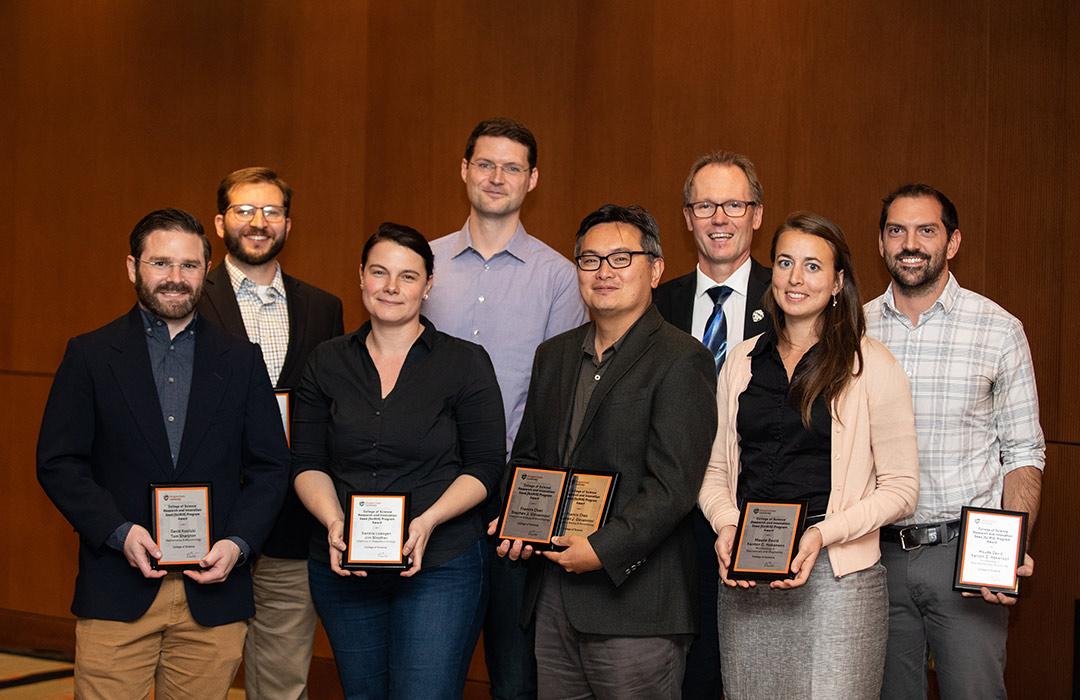 Four research teams won the Science Research and Innovation Seed Program Award (formerly known as the College of Science Impact Award) for projects that contribute to human health, drug development and marine science. The SciRis Award carries an amount of $10,000 for each team. The award-winning SciRis teams comprising:

Assistant Professor of Mathematics David Koslicki and Thomas Sharpton, assistant professor of microbiology and statistics, received the SciRis award for metagenomic analysis of voluminous microbiome data that are germane to diverse processes from global nutrient cycling to human disease. The project will enable Koslicki and Sharpton to create a leading-edge research portfolio of new algorithmic and data science solutions for the analysis and mathematical modeling of microbiome data and enhance research productivity by aiding OSU investigators in the analysis of microbiome data. The project will also recruit and train students in metagenomic science. In the long term, the researchers seek to “establish OSU as a center of excellence in microbiome data science.

This research combines the Loesgen Lab’s expertise with natural products and the Strother Lab’s experience in neuroscience to forge a bold new approach for neuroactive drug discovery.

Associate Professor of Integrative Biology Francis Chan and Stephen Giovannoni, Distinguished Professor of Microbiology, will pursue research on zero oxygen (anoxic) events in ocean ecosystems that are of greatest concern for ecosystems and fisheries. While scientists have developed a clear understanding of the climate-dependent factors that determine the formation of hypoxic (low oxygen) zones, the onset of anoxia remains both difficult to predict and surprisingly infrequent despite the prevalence of hypoxia.

Through recent research combining ocean climate science and marine microbial ecology, Chan and Giovannoni have discovered that oxygen availability has played an important but previously unrecognized role in shaping the evolution of metabolic pathways in microbes, and that such pathways may serve as climate-resilient barriers to anoxia.

Assistant Professor of Microbiology Maude David and Kenton Hokanson, instructor of microbiology and biochemistry and biophysics, will conduct molecular research to address anxiety disorders that affects 40 million people in the U.S. Although women are twice as likely as men to suffer from anxiety disorders, most research at the molecular level has exclusively studied male humans or animal models.

David and Hokanson aim to bridge this knowledge gap by integrating functional, molecular, and behavioral data to identify the role of specific microbial metabolites produced by a bacterium linked with anxiety in humans. This project will be conducted in female mice, maximizing their work’s impact on the large and underserved population of females affected by anxiety disorders. 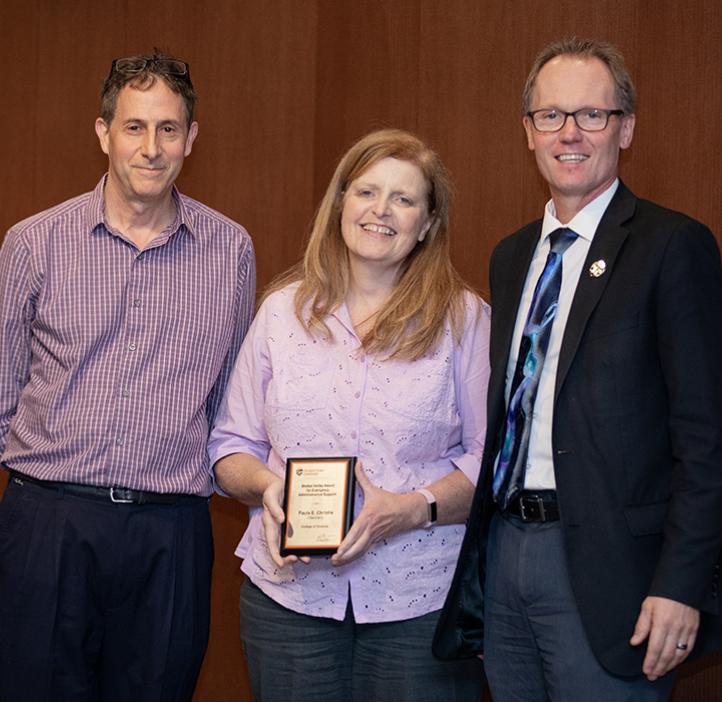 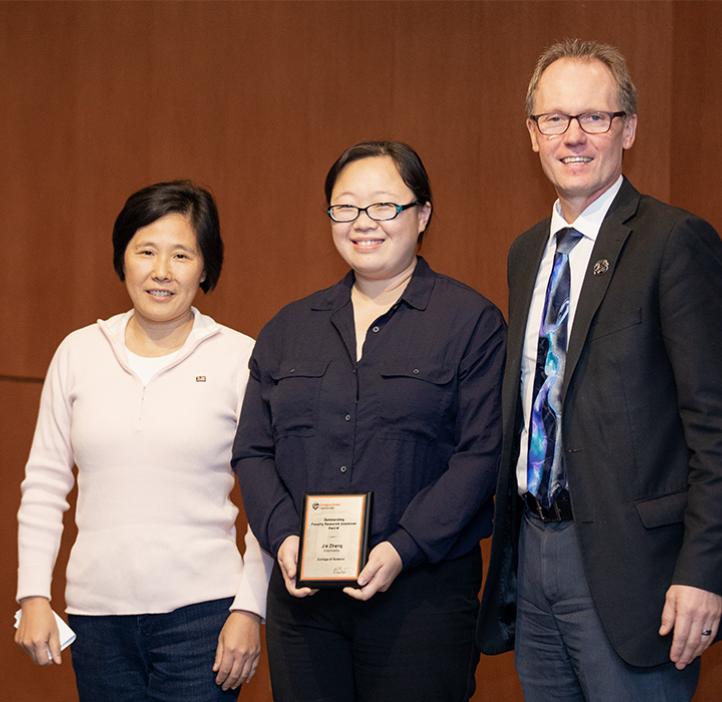 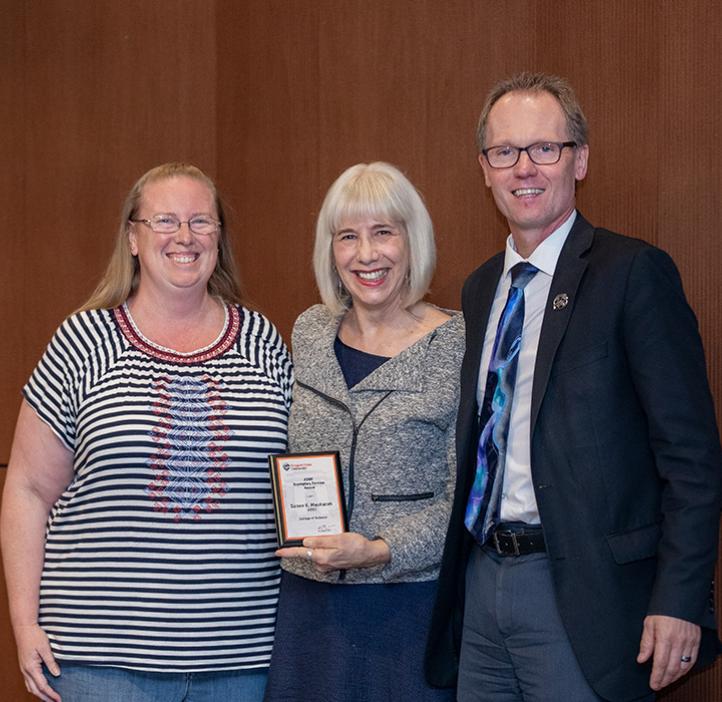 PaulaChristie, assistant to the head of the Department of Chemistry, received the Gladys Valley Award for Exemplary Administrative Support. Christie was appreciated for her hard work, professionalism and exemplary administrative abilities.

“Paula’s single best characteristic could be described as excellent and dedicated customer service. Her customers in this case are the entire department, from leadership to entering students to our staff,” said Michael Lerner, Head of the Department of Chemistry.

“From conversations with Wei Kong and from my observations, Jie Zhang has been as a key factor in the Kong group’s vitality and longevity. Wei gives Jie full credit for numerous important experimental breakthroughs, and also for the continued success in her research grant applications,” said Michael Lerner, Head of the Department of Chemistry.

In addition to her many achievements in the Kong lab, Zhang has trained several graduate students from start to completion, and the acknowledgements from those students’ theses are effusive. “Everybody needs a Jie Zhang in their lab,” said Kong.

Susan Machacek, an accountant in the Arts and Science Business Center (ASBC) received the ASBC Exemplary Service Award. This award recognizes exemplary service by a member of ASBC to the colleges within the Division. 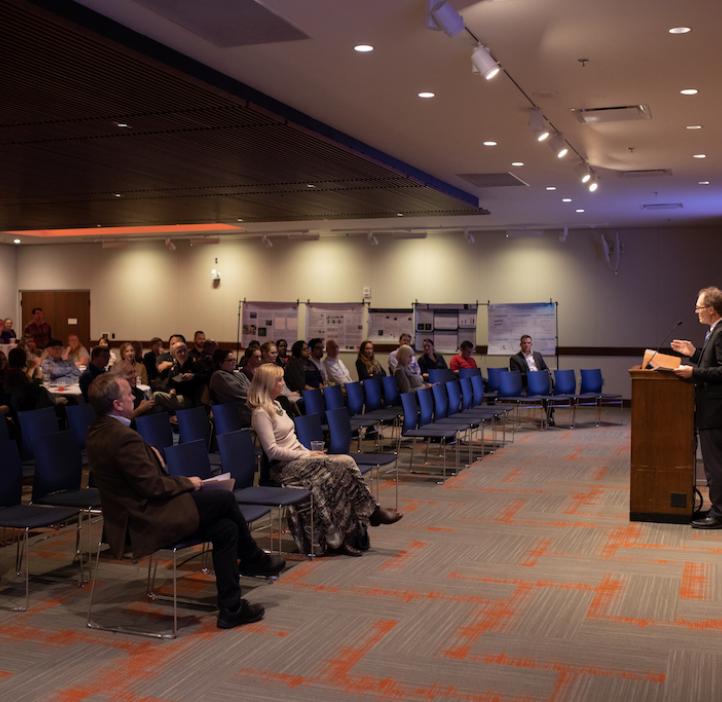 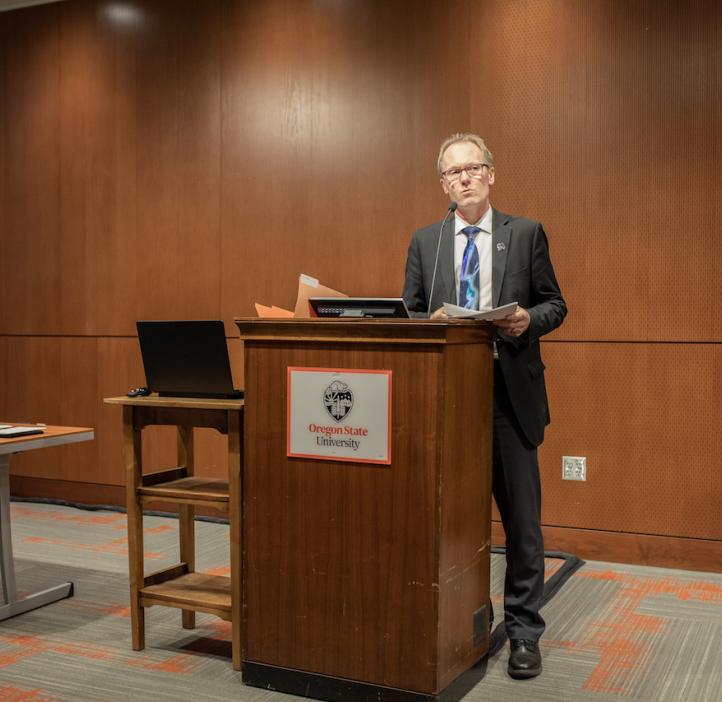 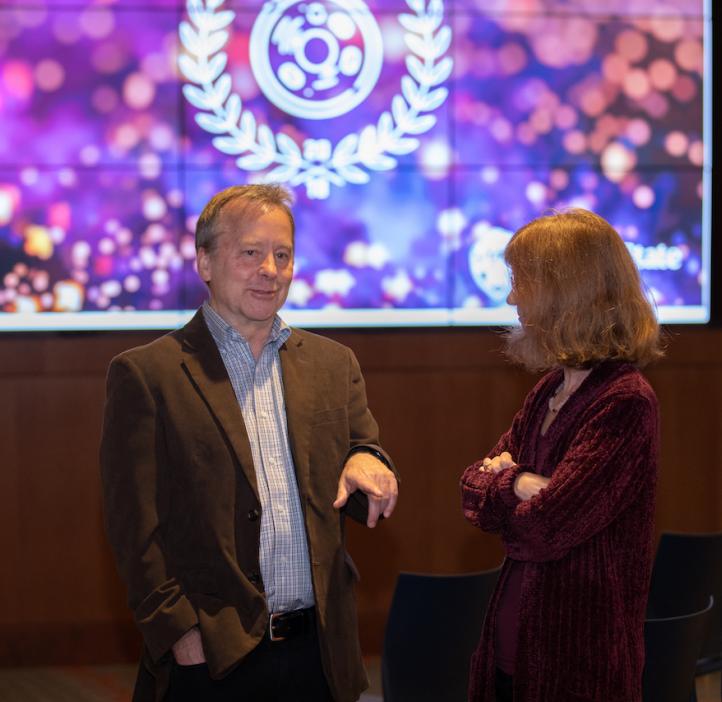 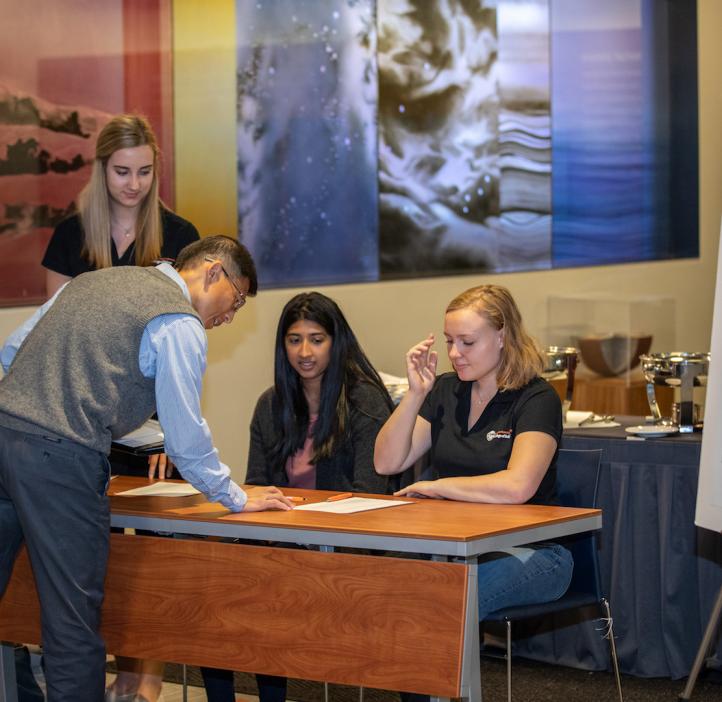 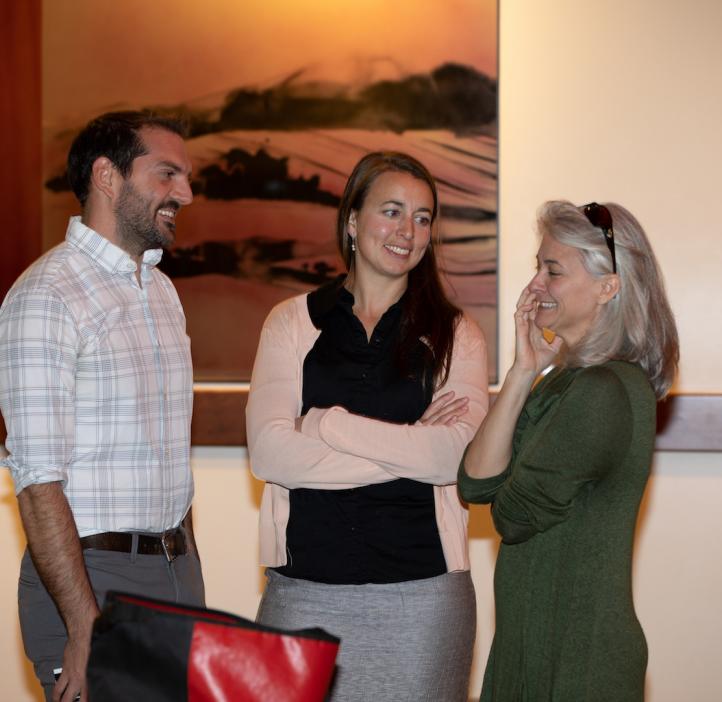 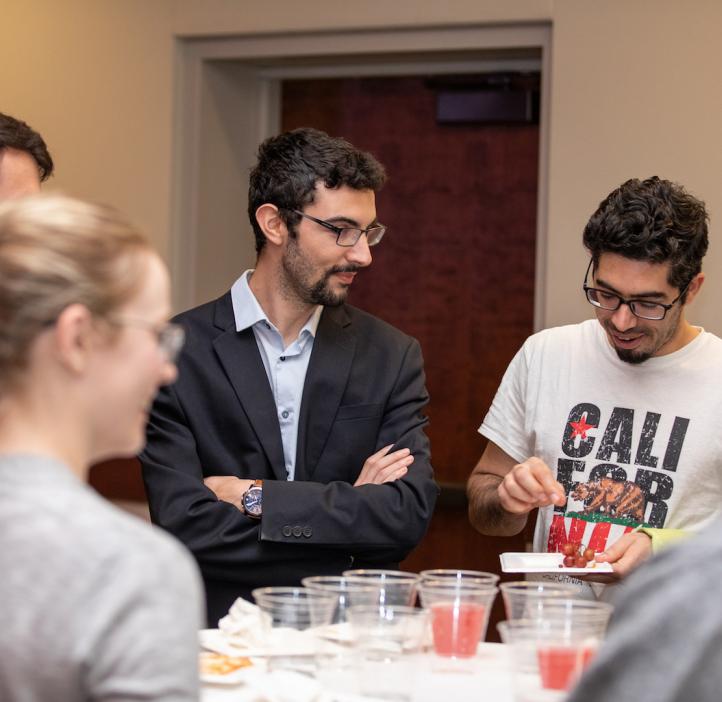 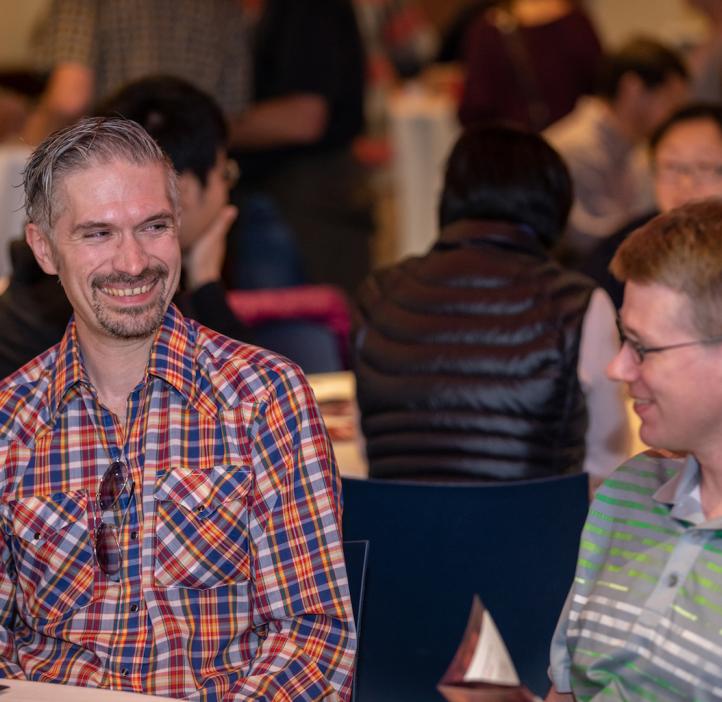 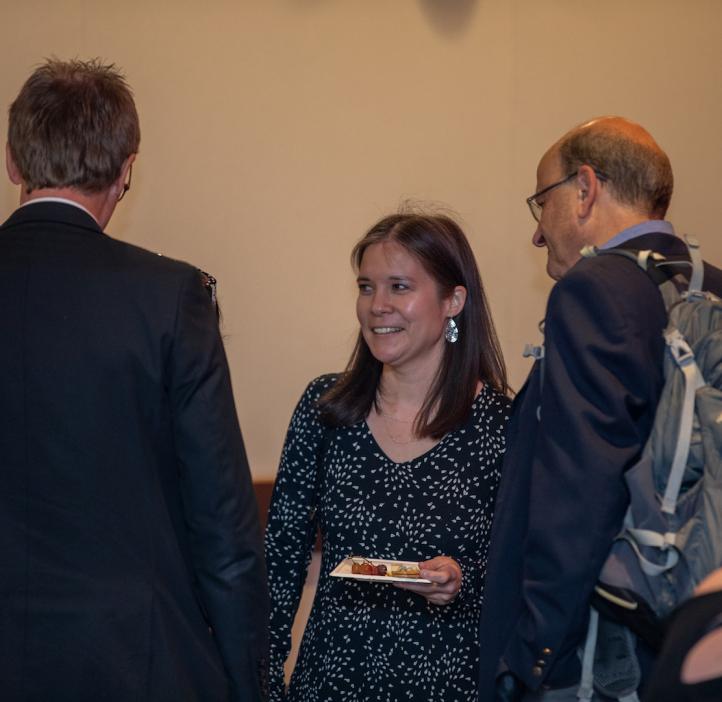 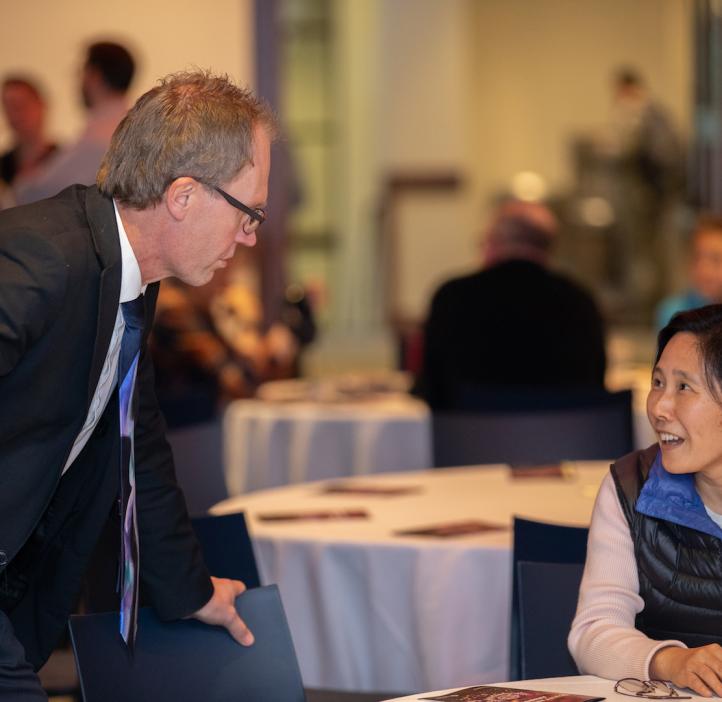 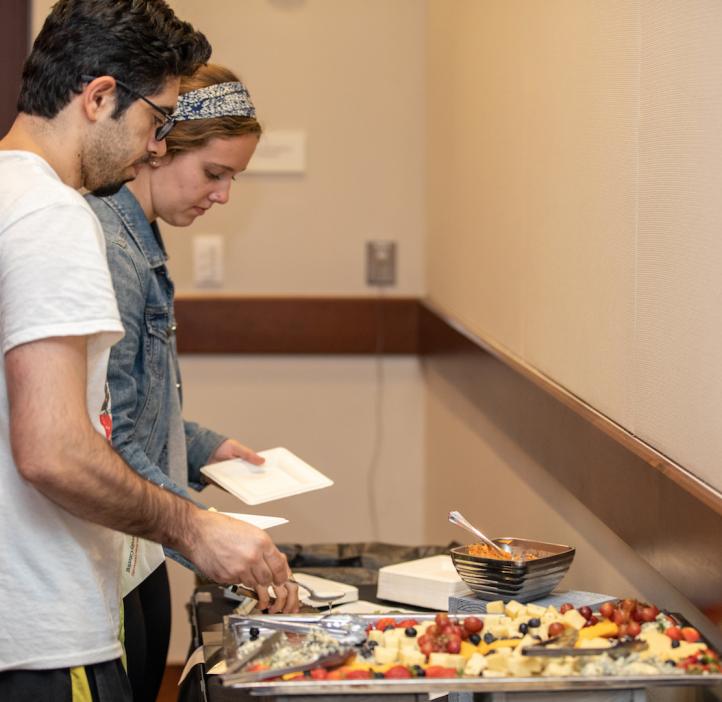 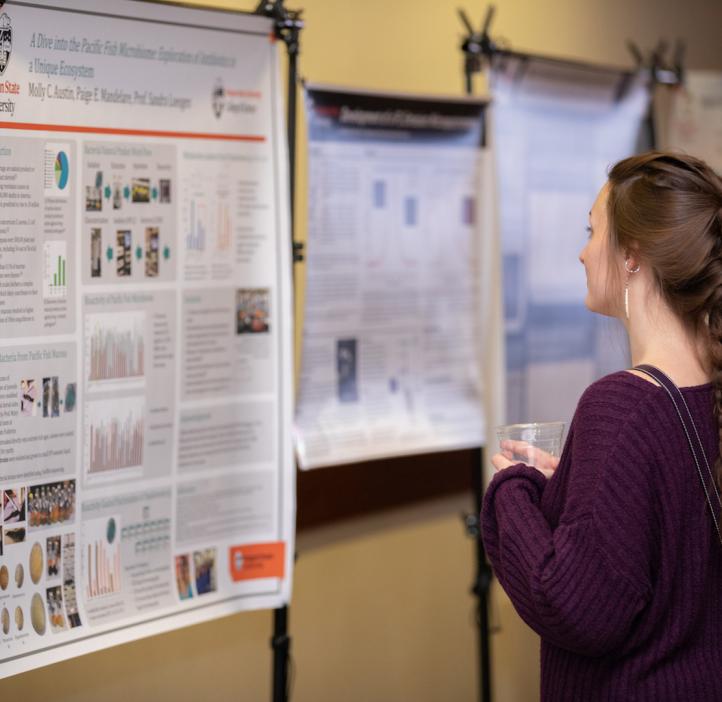 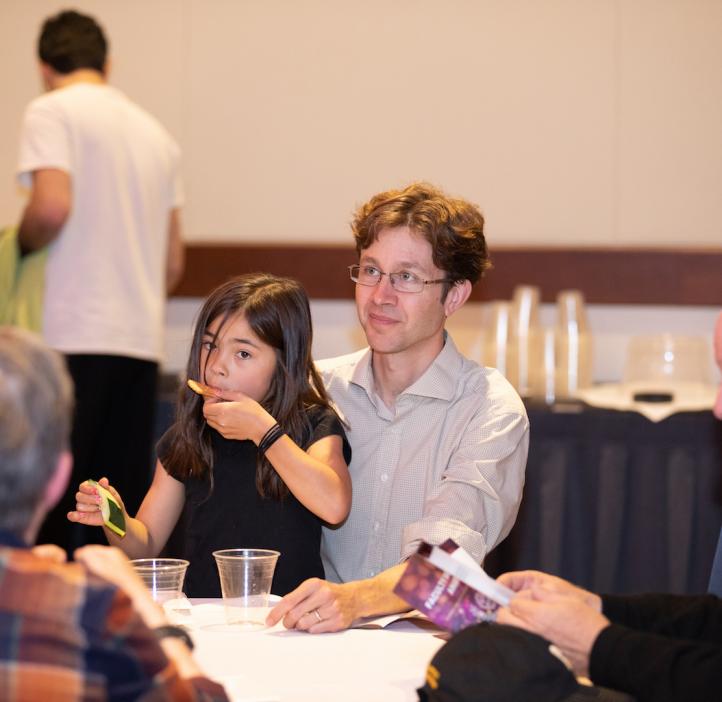 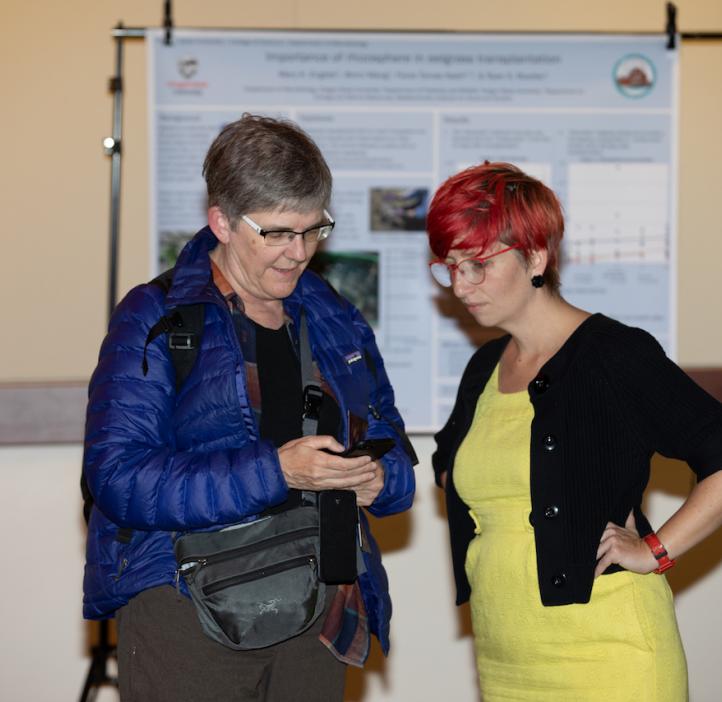 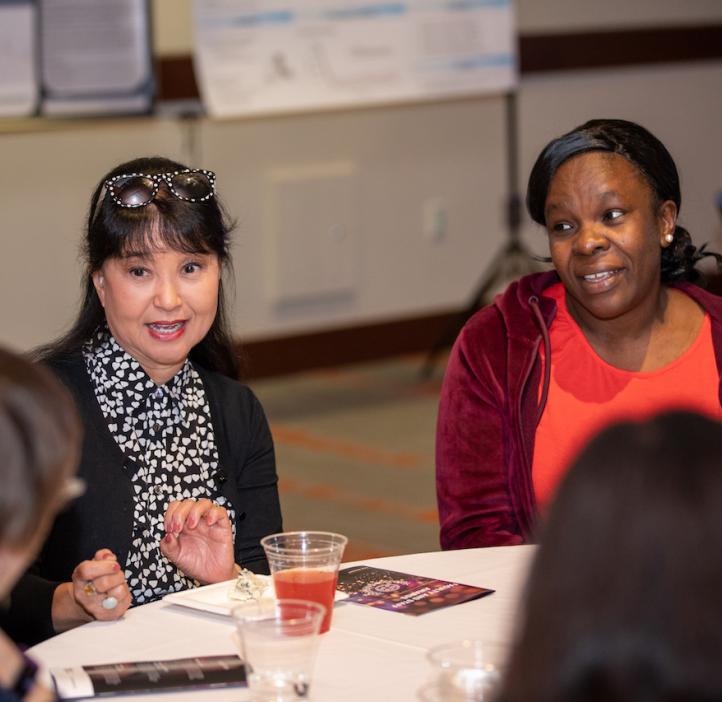 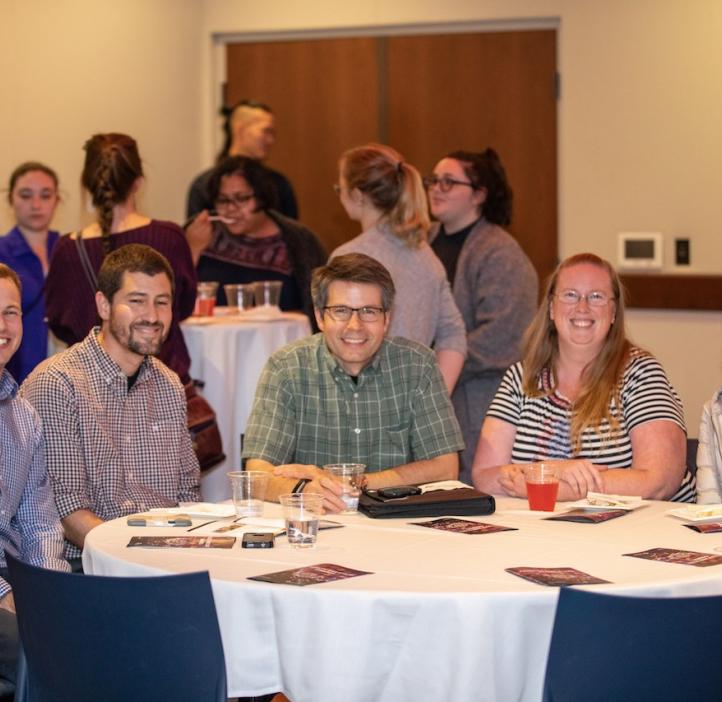