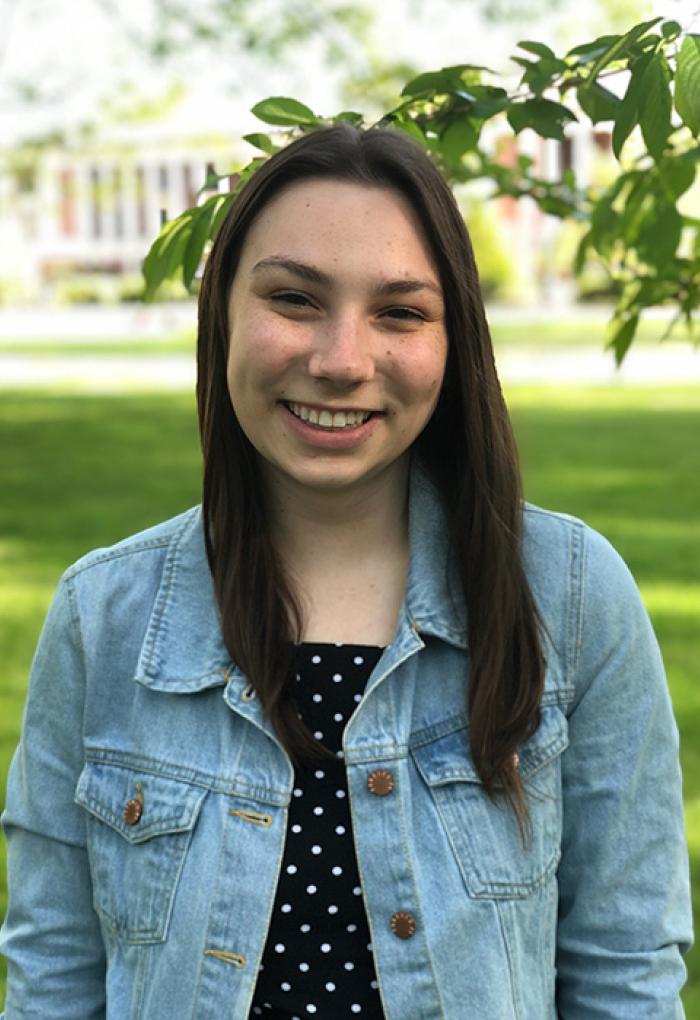 In addition, biochemistry and biophysics alumna Lynda Bradley (B.S. ’15) also won the award this year. Bradley is now pursuing a Ph.D. in the Department of Biology at Emory University. She conducted research on infectious diseases at the KwaZulu-Natal Research Institute for Tuberculosis and HIV in South Africa as a Fulbright Scholar during 2017-18.

Beyer’s award-winning research project focuses on one of the most innovative areas of biochemistry research at OSU — genetic code expansion, or the incorporation of non-standard amino acids into proteins to create new chemical functionality and engineer living systems. As an undergraduate researcher in the lab of biochemists Ryan Mehl and Richard Cooley, Beyer works on creating improved computationally designed tools to generate crystal structures of the non-standard amino acid 3-nitro-tyrosine (nitroTyr) synthetase, which will ultimately lead to the formation of a nitroTyr synthetase library identifying “hot spots” key to synthetase catalysis and complex formation.

Beyer has won several prestigious scholarships for outstanding academic performance. She is an OSU Presidential Scholar and has received a Merrill Family Scholarship from the College of Science, as well as OSU’s Drucilla Shepard Smith award. In 2018, her research in Mehl and Cooley’s lab was supported by the College’s Summer Undergraduate Research Experience in Science (SURE) award.

After graduating in June, Beyer will begin her Ph.D. in biochemistry and molecular biophysics at the University of Pennsylvania in Philadelphia. 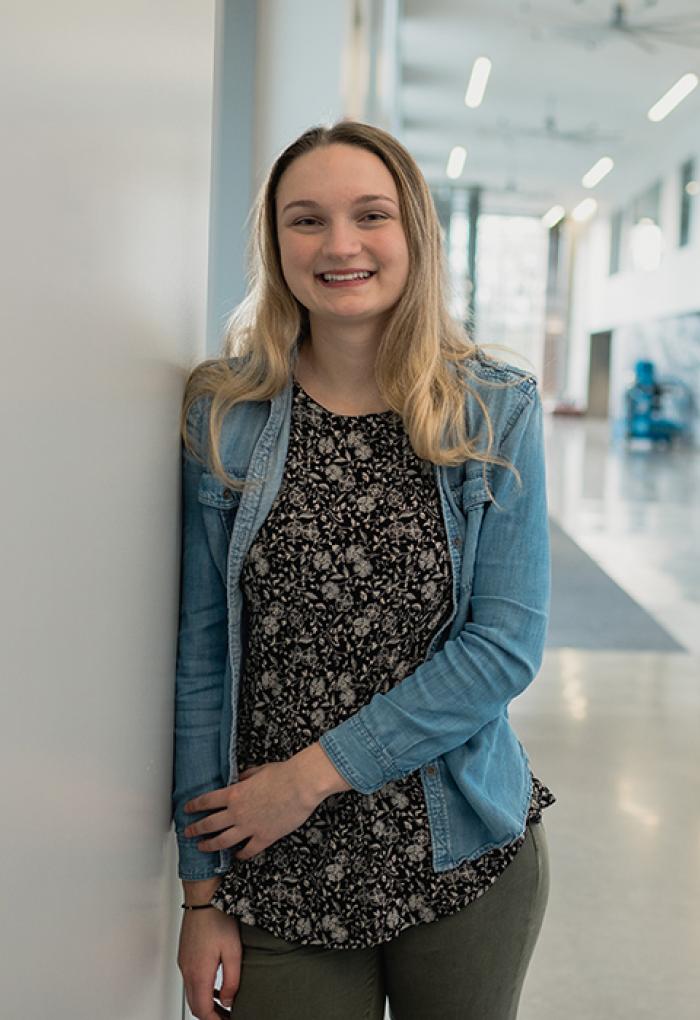 Smith was awarded the NSF graduate fellowship for her research project in biochemist Elisar Barbar’s lab on the characterization of how phosphorylation of disordered regions of certain cellular units modulates the activity of the motor protein dynein. The latter is responsible for moving cargo around a cell. Dynein also interacts with thousands of other proteins and is implicated in a vast number of vital cellular functions.

Smith will conduct research at the University of Ghent, Belgium as a Fulbright scholar following her graduation from OSU in June 2019. There she will investigate the pro-inflammatory receptor complex mediated by a signaling protein called Interleukin-31. After concluding her Fulbright fellowship, Smith plans to attend graduate school to study biophysics and chemical biology.

Smith has won some of the most prestigious scholarships at OSU and beyond. She was awarded the Barry Goldwater Scholarship in 2018, making her the only Goldwater awardee from the state of Oregon that year. Smith was recently named a 2019 Fulbright Fellow. She is an OSU Presidential Scholar as well as a recipient of the Tunison Scholarship from OSU’s chapter of the honor society Phi Kappa Phi, which is awarded for impressive scholarly achievements. Smith has also garnered several College of Science scholarships, including the Haberman Premedical Scholarship and the Elizabeth Reeves Scholarship for excellence in academics, extracurricular activities, leadership and research.

Meunier’s (pictured above) award-winning research project involves the development of a mathematical model integrating the ecology and evolution of species in a community for better ecosystem management. Guided by his advisors, biology professors Bruce Menge and Sally Hacker, Meunier investigates factors influencing the succession and stability of algae – and invertebrate-dominated communities at 13 rocky intertidal field sites across Oregon and Northern California.

At OSU, Meunier was a co-author on a path-breaking study, along with biologists Jane Lubchenco, Kirsten Grorud-Colvert and other graduate students, that examined whether nations had met their pledges regarding the preservation of marine protected areas. The group presented their crucial findings at the annual Our Ocean conference in Bali, Indonesia, and published the study in Marine Policy. 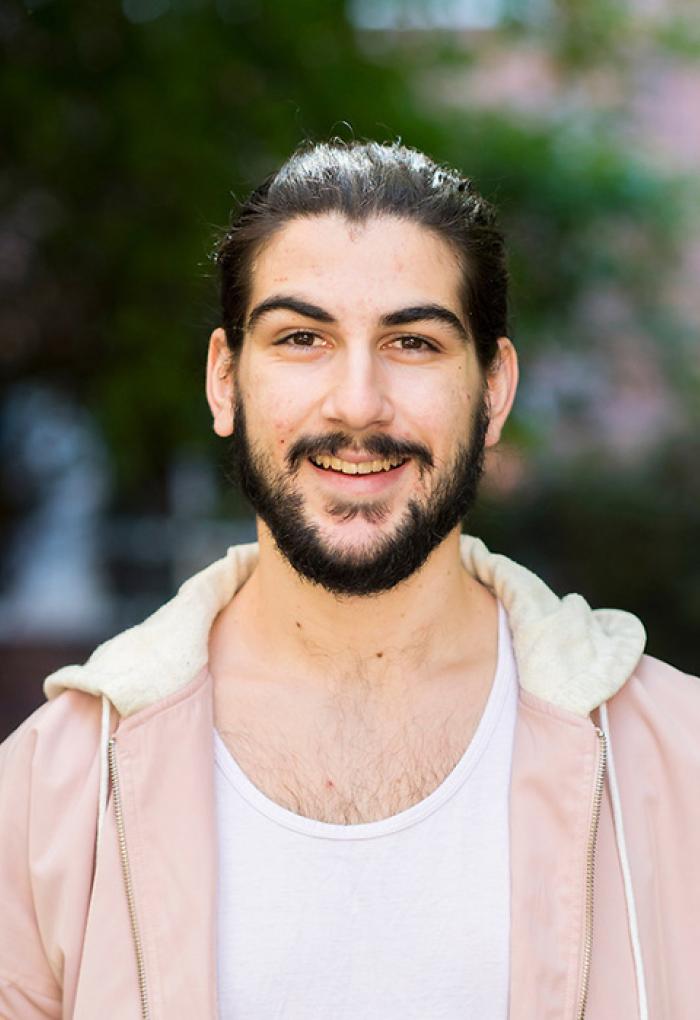 Kayhani obtained his undergraduate degree in biology from OSU. As a biology major, he engaged in extensive undergraduate research in several biology and ecology laboratories. These include studies on old-growth forest soils in agricultural scientist Kate Lajtha’s biogeochemistry lab and thermal tolerance in coral algal endosymbionts in the lab of biologist Eli Meyer.

An accomplished ballet dancer, Kayhani is keenly interested in exploring ways to integrate the arts into STEM education. Kayhani’s identity as a queer individual and a second-generation Iranian American has inspired him to get involved in several diversity-focused educational initiatives. He is a member of the Department of Integrative Biology’s newly formed committee on Graduate Equity, Justice, and Inclusivity and will focus on creating opportunities and resources for LGBTQ students and students of color to be successful in scientific careers.

He is also engaged in strengthening the Barreto lab’s collaboration with OSU’s chapter of the Louis Stokes Alliance for Minority Participation (LSAMP). Kayhani plans to work with LSAMP to develop workshops to give students of underrepresented groups the opportunity to gain applicable laboratory skills via experiments in physiology and genetics, and by assisting in data collection and analysis within the area of his dissertation research.

In 2019, NSF offered a total of 2,051 awards to students from a competitive pool of applicants from all 50 states as well as the District of Columbia and U.S. territories. The GRFP provides three years of financial support within a five-year fellowship period — $34,000 annual stipend and $12,000 cost-of-education allowance to the graduate institution. That support is for graduate study that leads to a research-based master’s or doctoral degree in a STEM field.