The College of Science celebrated research, teaching and administrative excellence at its 2017 Fall Faculty and Staff Awards with a reception and ceremony on October 5.

Dean Roy Haggerty delivered welcome remarks and shared his perspective on the challenges science faces nationally as well as opportunities for our campus community. He warmly praised the award-winning researchers, instructional faculty and staff for their impressive accomplishments and dedication to service.

The College announced three new awards this year that support research and teaching excellence: Dean's Early Career Impact Award, College Impact Award with a $10,000 stipend and two Faculty Scholars for Teaching Excellence Awards which carry an award of $12,500 for three years. These awards are possible thanks to the generous philanthropic support of our alumni and friends and matching funds invested by the Provost's Office.

The awards ceremony was followed by a reception and a poster session showcasing the summer research projects of SURE Science students.

Hearty congratulations to these award-winning faculty and staff who were recognized for their outstanding achievements: 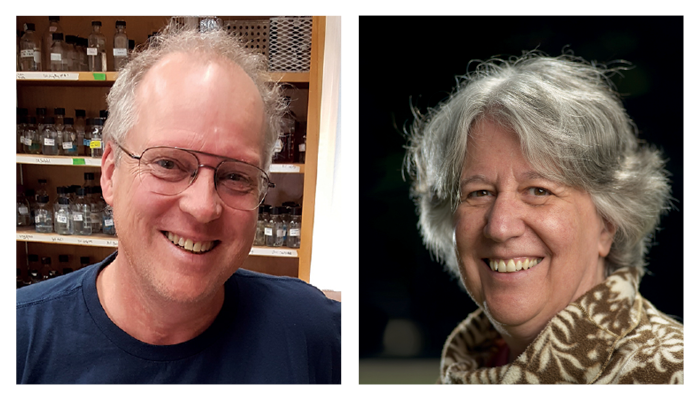 Michael Freitag, professor of biochemistry and biophysics, received the Milton Harris Award in Basic Research for his outstanding research on how chromatin proteins shape eukaryotic genomes and epigenetic mechanisms of regulating DNA transcription through the use of filamentous fungi model systems.

Freitag has published more than 280 papers in prestigious journals, such as Proceedings of the National Academy of Sciences, Genome Research, Science and Nature; he has published 66 papers and received more than 8,500 citations for his work in the last 10 years.

Colleagues describe Freitag as among "the most respected scientists in the field of fungal biology."

"Since Michael’s arrival at OSU in 2006, he has built a fantastically productive and internationally recognized basic research program," said Andrew Karplus, Head of the Department of Biochemistry and Biophysics.

Freitag is renowned for his 2010 work pioneering the “ChIP-seq” approach in filamentous fungi. ChIP-seq is a high-throughput approach to obtain genome-wide maps showing which parts of a cell’s DNA make direct contacts with proteins. As one nominator noted, this work “made his lab a training ground for researchers from the United States, Europe, Asia and Australia to learn ChIP-seq and its computationally intensive analyses.”

Corinne Manogue, professor of physics, was honored with the F.A. Gillfilan Award for Distinguished Scholarship in Science. The Gilfillan Award honors a faculty member in the College whose scholarship and scientific accomplishments have extended over a substantial period of time.

An outstanding theoretical physicist, Manogue's research focuses on quantum gravity and she played a key role in the early work relating division algebras and supersymmetry. She currently studies the use of octonians—a type of algebra—to study fundamental particles.

She has pioneered physics education research and written articles on how to help students make the difficult transition from lower-division to upper-division physics. Her work has been generously funded by the NSF and has trained multiple students and postdocs who have gone on to become leaders in Physics Education Research.

"Corinne has helped to make discipline-based education research in science a highly respected endeavor that is changing the way we teach science in universities," said Heidi Schellman, Head of the Department of Physics. 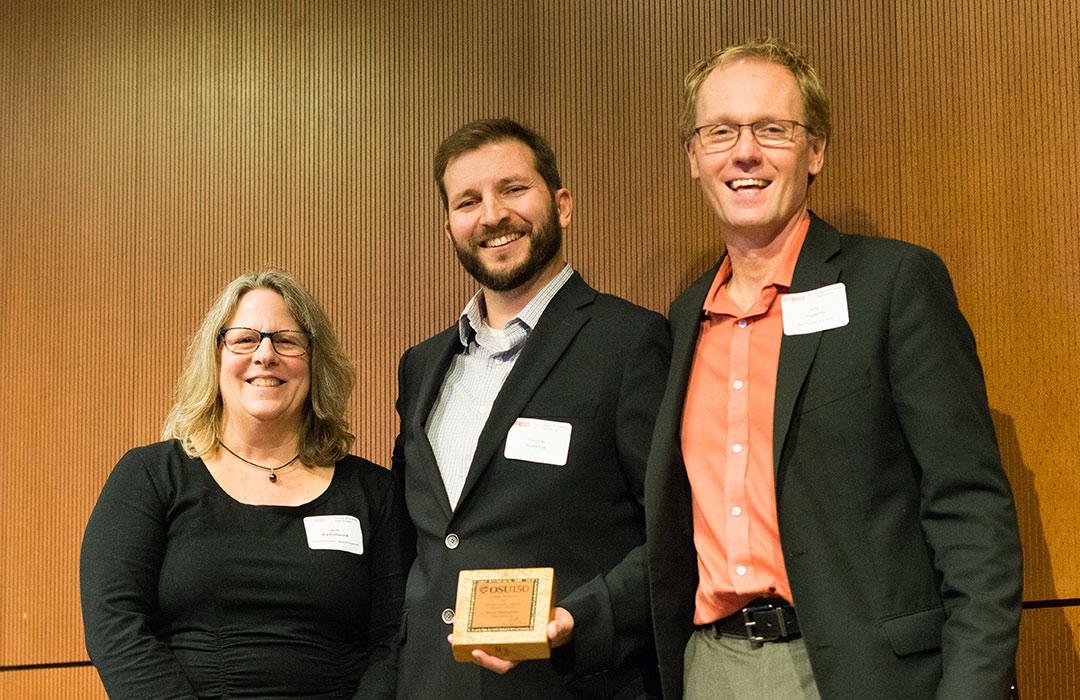 Thomas Sharpton, assistant professor of microbiology and statistics, received the Dean's Early Career Impact Award for exceptional achievement in research and education by a tenure-track faculty. Sharpton has acquired a national reputation for his work in microbial bioinformatics.

Since joining OSU in 2013, Sharpton has published 15 papers, including one in Proceedings of the National Academy of Sciences (PNAS) which has opened new doors in microbiome exploration by bringing statistical acumen to bioinformatics. This approach applies evolutionary methods to detect long-term historical trends in host/microbe co-evolution.

Among his greatest achievements are developing new technologies, such as Sifting Families (SFams), a system for classifying protein diversity, and his recently published method for automating gene family abundance estimation from metagenomics data. Sharpton's study on the disruption of the zebrafish microbiome as a result of exposure to the antimicrobial agent triclosan was featured in TIME and Fortune magazine.

In recognition of Sharpton’s contributions, he was selected as OSU's official representative for the National Microbiome Initiative Rollout at the White House Office of Science and Technology Policy (OSTP) and was the lead author of OSU's response to OSTP's Call for New Commitments on microbiome research.

This spring the College of Science and OSU's Office of Research launched the Oregon State University Microbiome Initiative (OMBI), led by Sharpton. Through OMBI, an ongoing education and research program, Sharpton is emerging as a campus leader in innovative teaching of bioinformatics and bioinformatics curriculum development.

"Since his arrival at OSU, Dr. Sharpton has made tremendous impacts on the institution's educational and research landscape and has produced substantial discoveries in his field," said Jerri Bartholomew, Head of the Department of Microbiology. 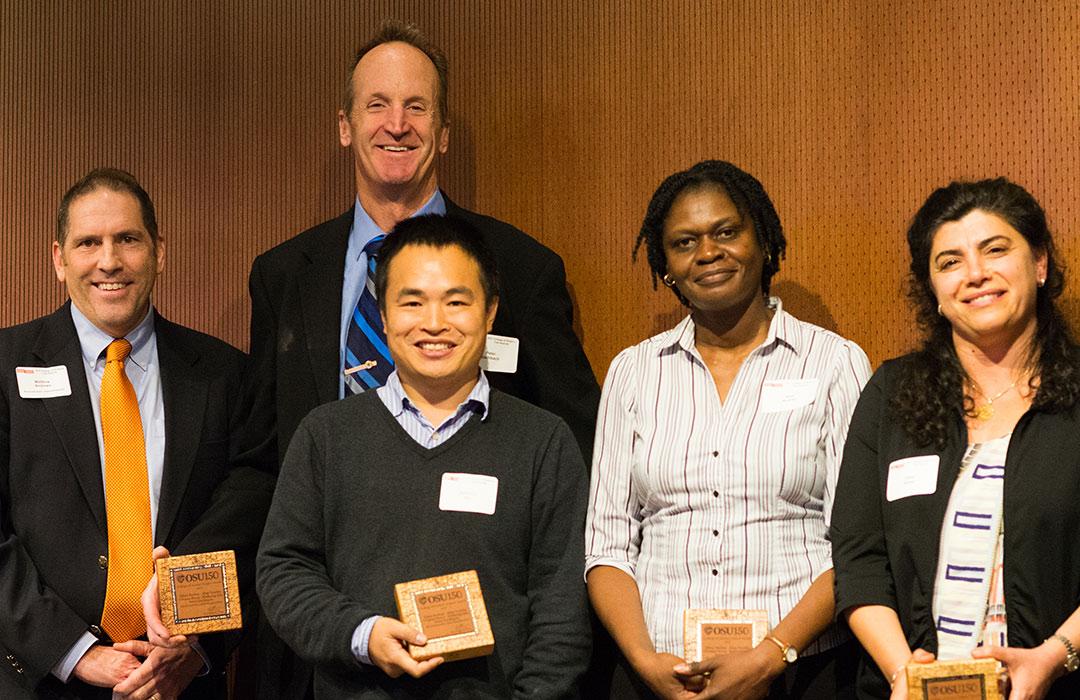 As a testament to their importance and prevalence in biology, IDPs are increasingly appearing in various research projects at OSU ranging from motor proteins and the mitotic spindle (Barbar, Qiu), cancer invasion and tumor progression (Nyarko, Kolluri) and aging (Perez).

The Barbar Lab will join forces with Nyarko, Perez, Qiu and Eschbach to integrate interdisciplinary approaches and cutting-edge, university-wide facilities to continue the study of IDPs in different biological systems. The diversity of expertise will help establish OSU's reputation for excellence as a global leader for driving IDP research in the nation. 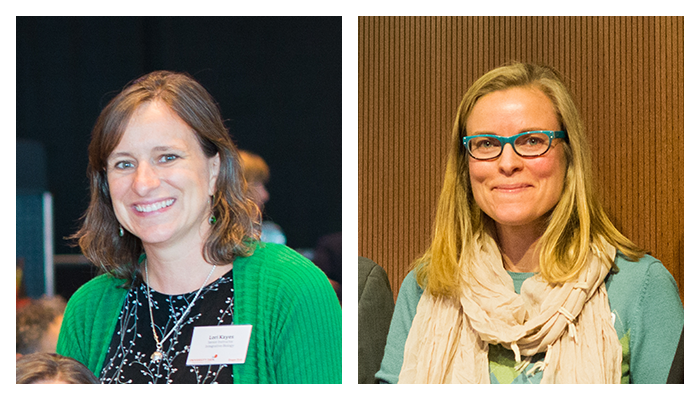 Lori J. Kayes, an integrative biology instructor, has won the College of Science Faculty Scholar for Teaching Excellence Award. This new award for a three-year faculty scholar position supports excellence and innovation in teaching and carries an annual stipend of $12,500.

For the past six years, Kayes has led faculty development workshops and facilitated the development of teaching materials for introductory biology sequences. Additionally, she has worked extensively with faculty around the state from all institution types to increase the alignment of introductory biology both vertically within a curriculum and horizontally across institution types.

The proposal provides workshops support, faculty support in the form of graduate training assistants to develop curriculum and a comprehensive evaluation plan for the newly revised curricula. This project will impact approximately 1500 students at OSU and the surrounding community colleges per year and involve more than 20 faculty.

Mary Beisiegel, assistant professor of mathematics, received the Ben and Elaine Whiteley Faculty Scholar Award for Teaching Excellence. Beisiegel is a highly gifted teacher of mathematics and is the Mathematics Department's expert on teacher training at all levels.

An accomplished scholar whose research focuses on how people prepare for careers in post-secondary mathematics education, Beisiegel often incorporates her research and evidence-based pedagogical models into teaching.

In 2016, she was awarded a five-year, NSF grant to work on curriculum renewal in lower division mathematics courses. She also received the 2017 Henry L. Alder Award for Distinguished Teaching from the Mathematical Association of America.

Beisiegel will use her award to conduct 12 seminars over the next three years for faculty and graduate teaching assistants focused on how to implement research and evidence-based active learning techniques in the classroom.

"Mary has managed to infect others with her enthusiasm and to promote in others the desire to seriously reflect on their teaching, " said Tom Dick, a professor of mathematics in the Department of Mathematics. 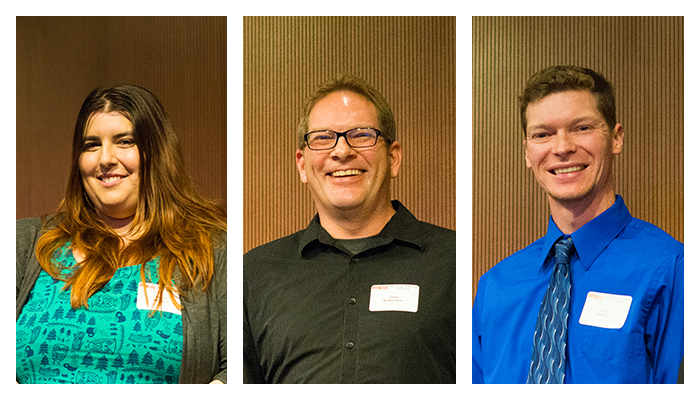 Sharon Betterton, a graphic designer in the College of Science, received the Gladys Valley Award for Exemplary Administrative Support. Betterton was recognized for her high degree of professionalism, outstanding creative impact and exceptional collaborative skills.

Her extraordinary work as a designer has contributed to a strong College of Science brand that is recognizable, fresh, unique and professional. Her work is well regarded and respected across the university and held up as an example of highly effective marketing.

"She maintains high standards of excellence for her work and is one of the most talented creative professionals I have worked with in my 20-year career," said Debbie Farris, assistant director of marketing and communications in the College.

Jamie Bridenstine, an accountant in finance and administration in the Arts and Science Business Center (ASBC), received the ASBC Exemplary Service Award. This award recognizes exemplary service by a member of ASBC to the colleges within the Division. 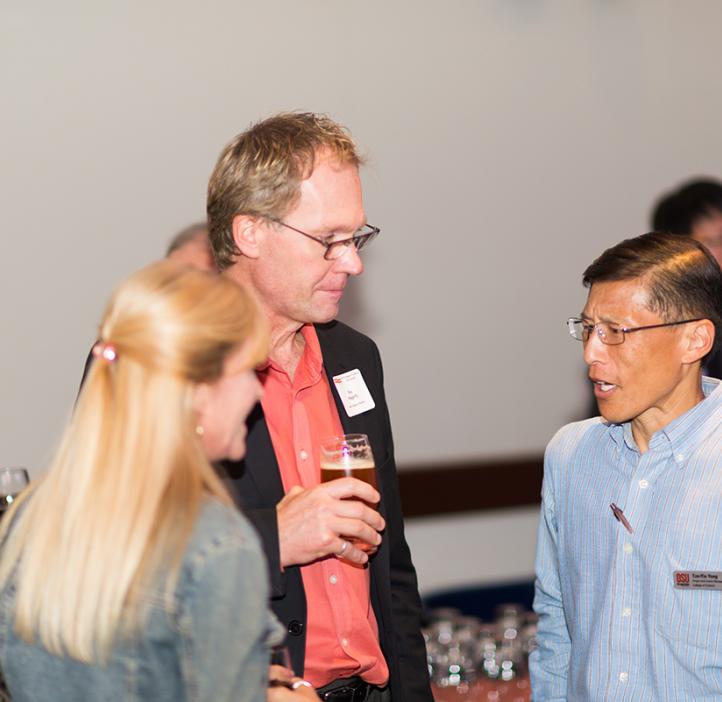 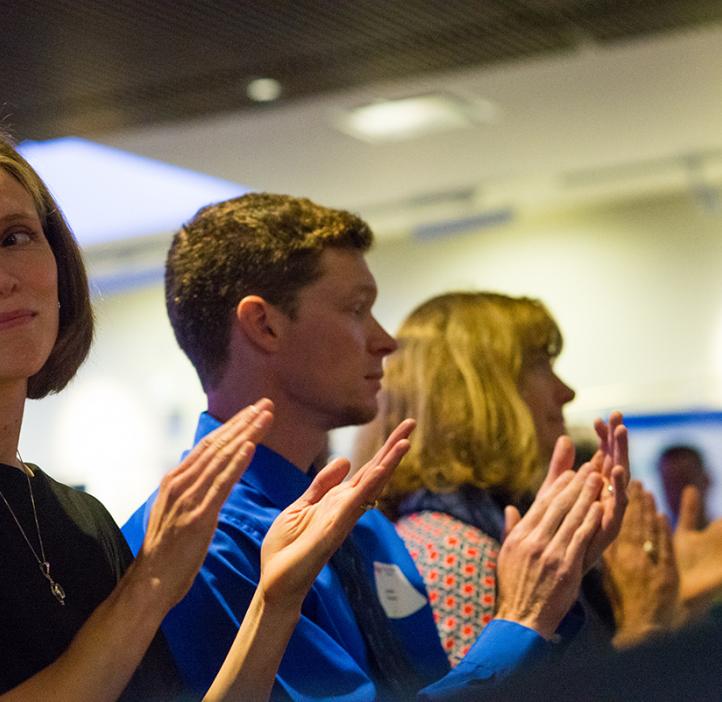 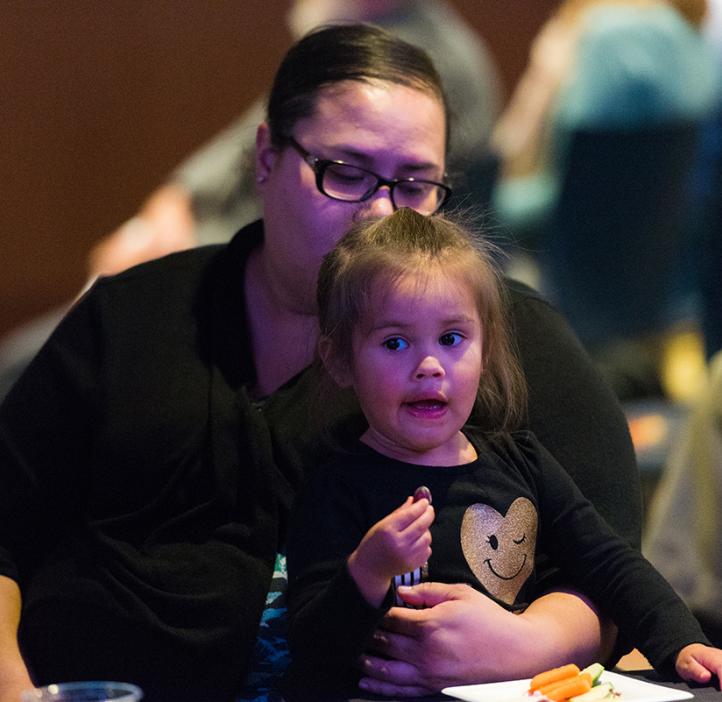 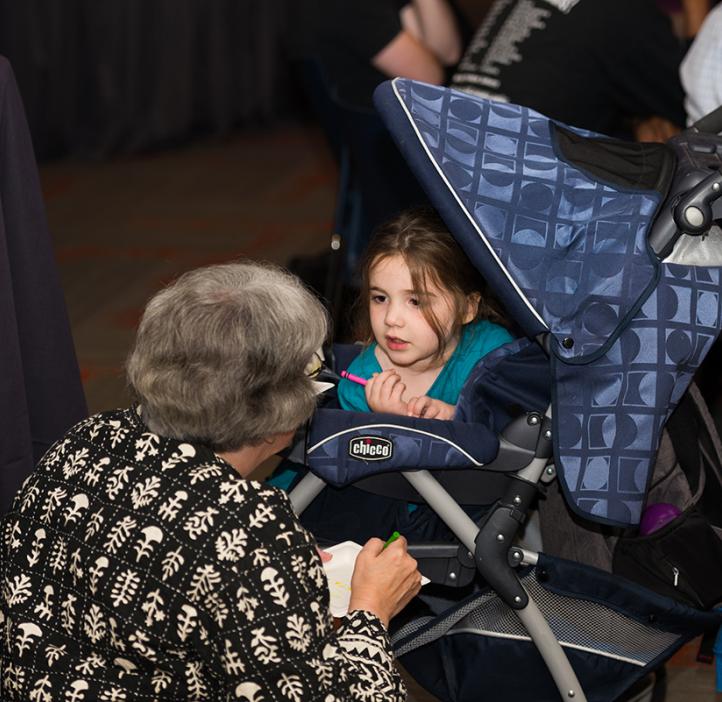 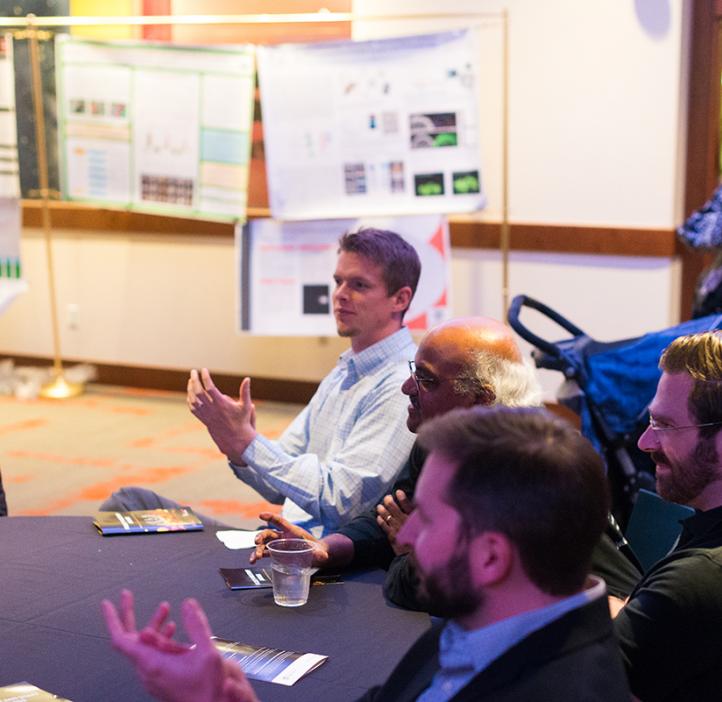 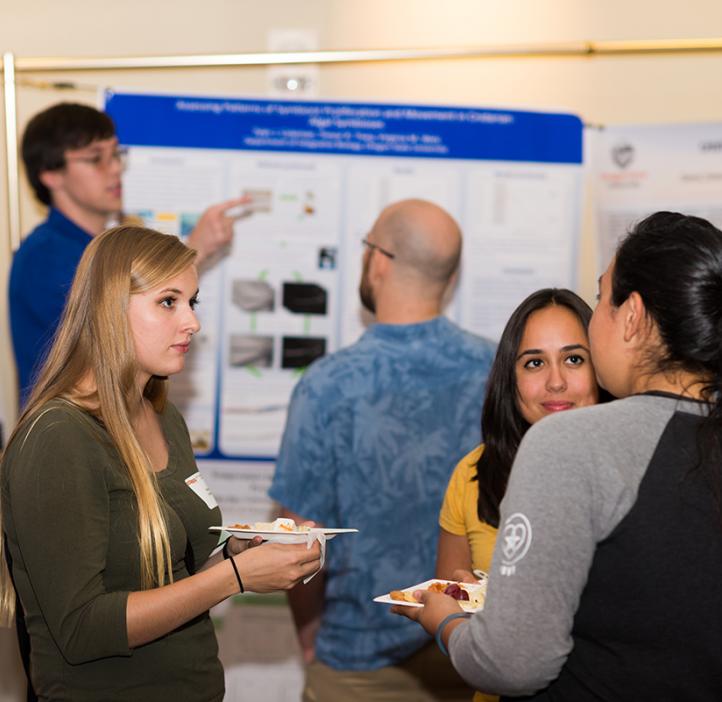 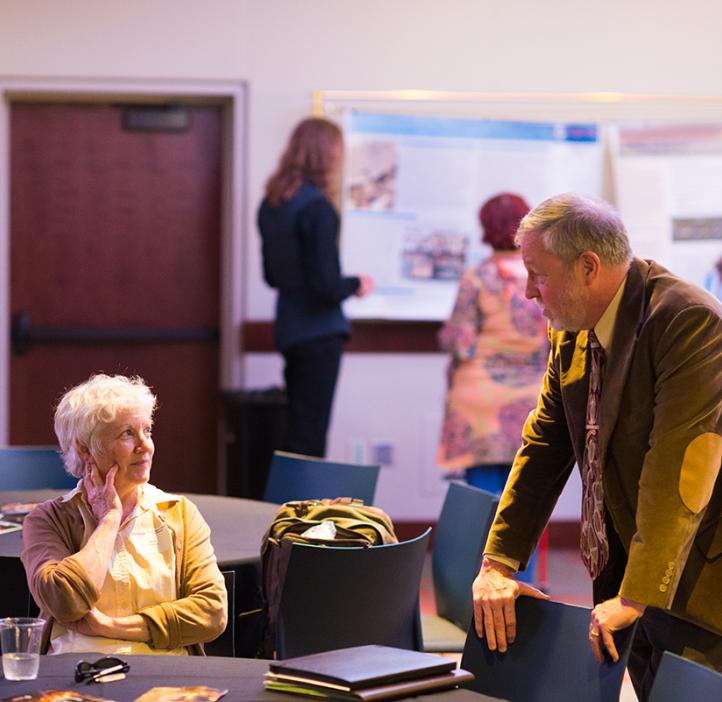 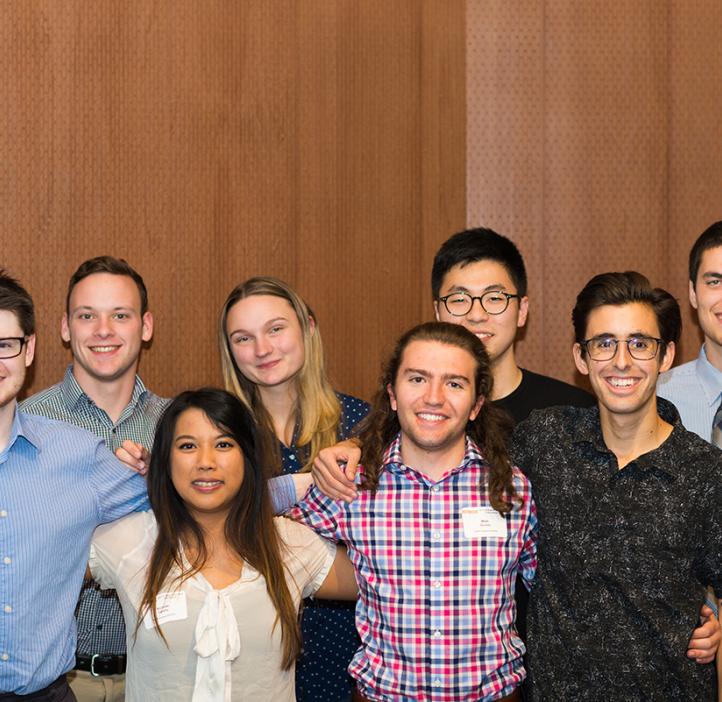 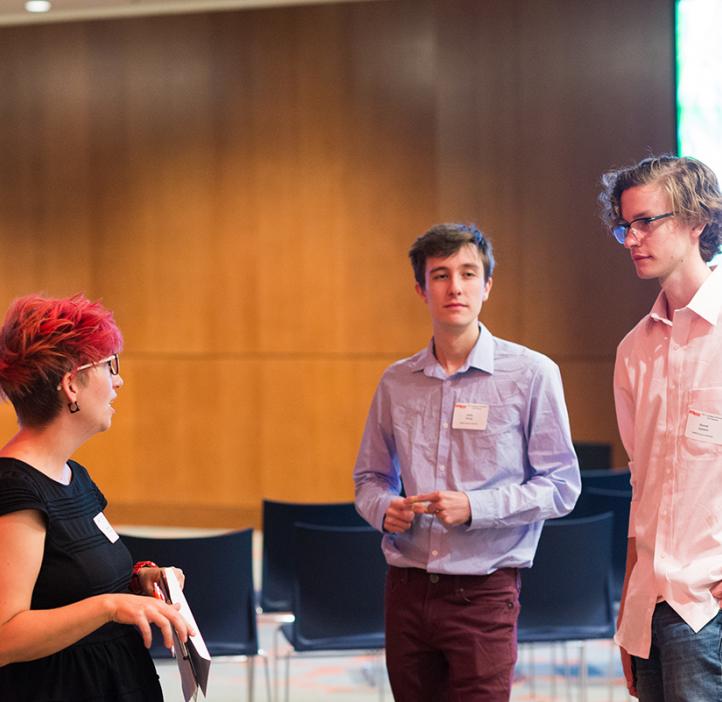 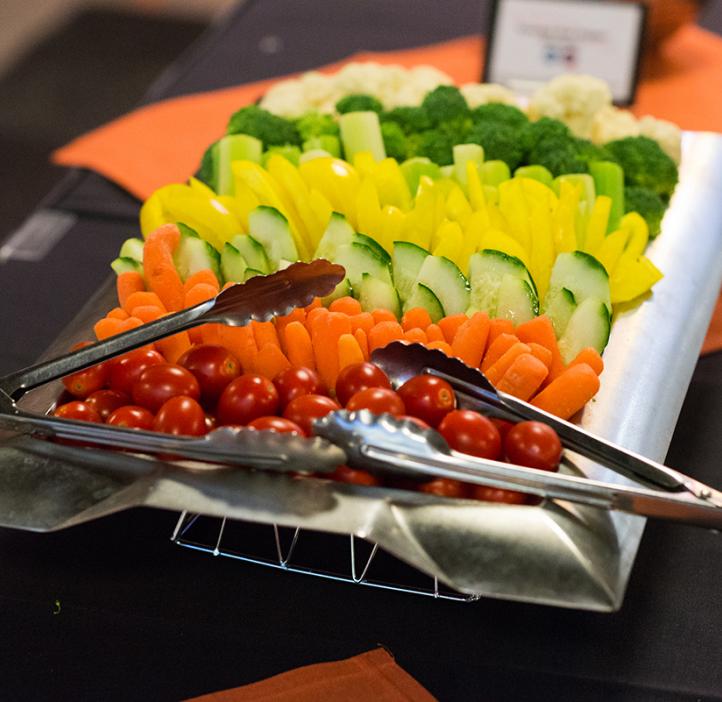 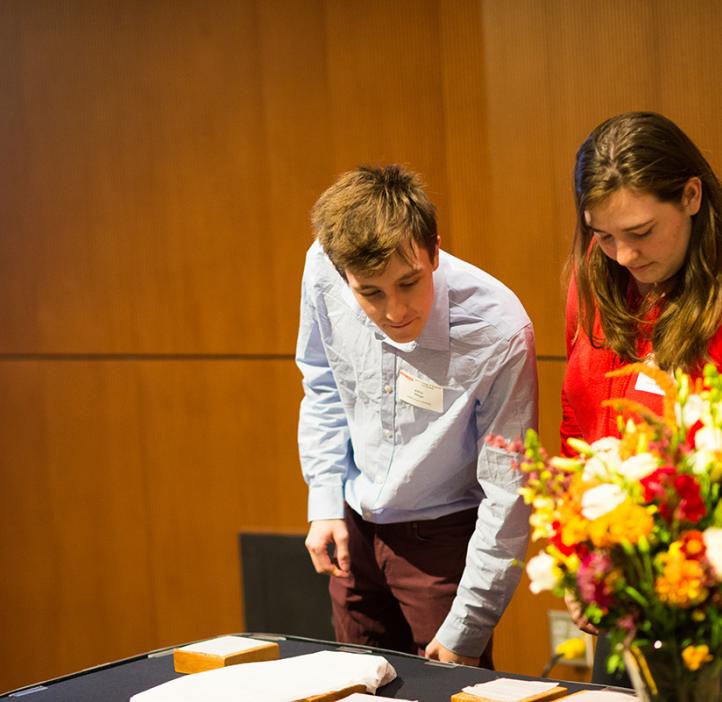 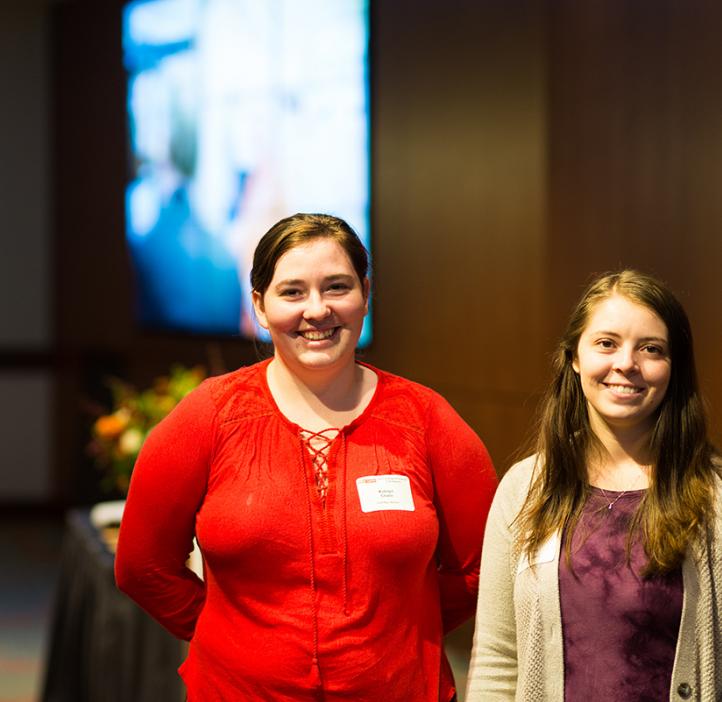 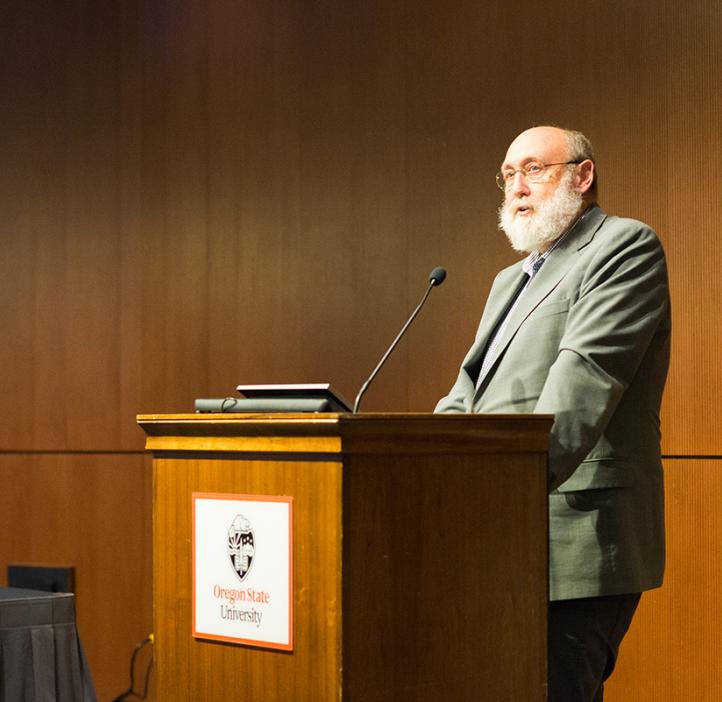