Robert Mason, a nationally recognized scientist and teacher whose research helped unlock the mysteries of chemical communication and reproduction in garter snakes, presented the 2017 F.A. Gilfillan Memorial Lecture April 3, 2017. In his talk “The Garden of Eden revisited: What can we learn from snakes, sex and scents,” Mason acquainted audiences with his extraordinary research discoveries during his 35-year career.

Mason is the 2016 recipient of the College of Science’s F.A. Gilfillan Award for Distinguished Scholarship, which recognizes distinguished scholarship in science by honoring a faculty in the College who demonstrates a long and exceptional scientific career with scholarly achievements widely recognized nationally and globally. 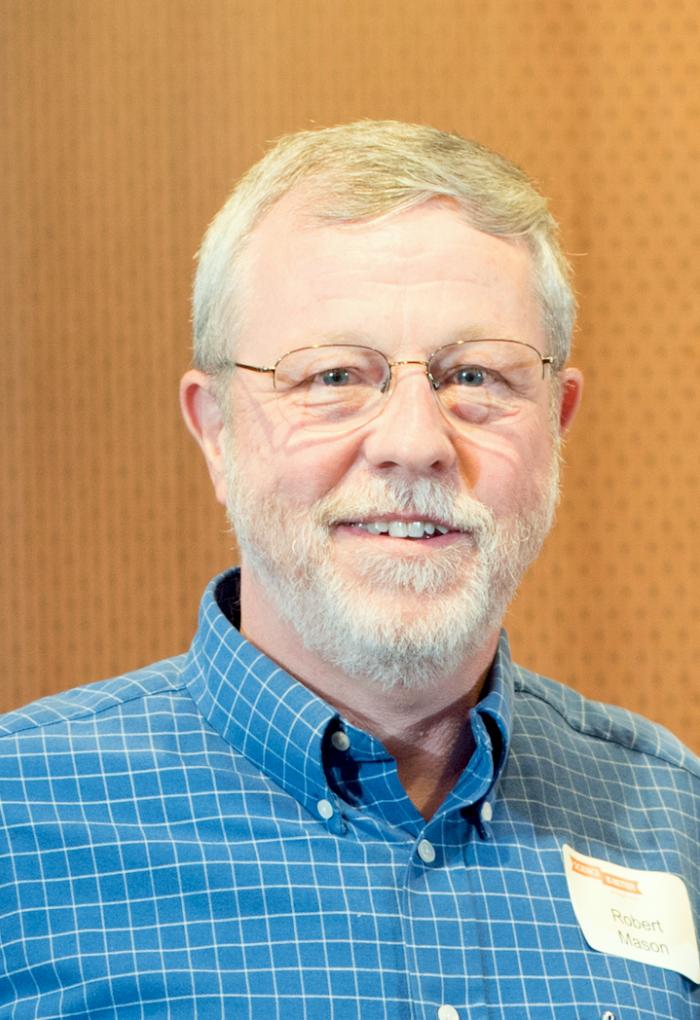 Mason discussed the biological and chemical processes that influence reproduction in snakes as well as the larger implications of his research. He explained the fascinating phenomenon of pheromone-fueled mating in snakes and what makes pheromones an indispensable ingredient for sex among reptiles. Mason combines painstaking field research with laboratory experimentation, original scientific pursuits with outstanding teaching and mentorship. This enables him to give audiences a glimpse into what it means to have a versatile life in the world of science.

A wonder of the natural world, the Narcisse Snake Dens of Manitoba, Canada, are the winter home to tens of thousands of garter snakes and the setting for much of Mason’s field research. His research has appeared in the media and in leading publications worldwide, including the Discovery Channel, National Geographic, BBC to Science magazine, Nature and more. His work inspired the award-winning children’s book, The Snake Scientist.

Why study snakes? Fundamental research using reptiles and other animals has revealed much of what we know about biology. According to Mason, by studying animal models scientists are learning more about what drives biological processes and behaviors that can form a foundation for understanding health and disease in humans.

“Humans are exquisitely complex. We study simpler models to understand,” said Mason “The blood of the snakes is exactly the same as our blood. Estrogen and testosterone in snakes are exactly the same as in humans. Like humans, snakes suffer from infertility when they are stressed.”

“What we figure out in the critters—the basic science in these models that helps scientists who study mammals like mice—will travel upwards to humans.”

A reproductive biologist by training, Mason is best known for his fundamental discoveries about the chemistry of pheromone molecules in garter snakes and how pheromones influence their sexual behaviors. He was the first scientist to isolate, identify and chemically synthesize a pheromone from a reptile, and his discovery opened the doors to new fields of inquiry around reproduction in snakes. Mason used both lab-based analysis of the chemical composition of pheromones and studies of the snakes’ physiological ecology and behavior in the field to arrive at his results.

While there is a great deal of interest in mammal pheromones and more than 1,000 insect pheromones have been identified, the number of identified vertebrate pheromones is very small, according to Mason. Scientific knowledge of pheromone action as well as its isolation and identification in vertebrates is poor by comparison to what is known in invertebrates, thereby making his achievement all the more significant.

A pheromone is a chemical signal that stimulates certain social and sexual behaviors within members of the same species. Mason conclusively proved that the only way male red-sided garter snakes detect the presence of females is by smelling the pheromones on their skin. Once the male snake flicks its tongue on the skin of a female, the pheromone molecules are carried to the volmeronasal organ which detects odor, and the mating can commence.

“Snakes are completely dependent on pheromone cues for reproduction,” explains Mason. “If the female doesn’t produce the pheromone or the male cannot detect it, reproduction will completely stop.”

It is this singular and pronounced trait, Mason explains, which makes snakes a good model for reproductive research. Mice, the most popular biological animal model, exhibits a variety of mating cues and behaviors that are not just restricted to pheromone signals, making it difficult to manipulate or genetically engineer them to study reproduction.

Mason’s interest in reptile pheromones took root in the early eighties. As a Ph.D. student at University of Texas, Austin, Mason was assisting on a research project involving the role of brain hormones in sexual reproduction in garter snakes. But an important part of the puzzle was missing.

“It kept coming down to pheromones, and I thought that piece is really important and we don’t know anything about it. I read the literature and there was very little known about any kind of pheromones in any kind of vertebrates. I said I am going to take a shot at that.”

Mason’s research on the red-sided garter snake in the famed snake caverns of Narcisse Wildlife Management Area in Manitoba, Canada, would finally get him the answer he sought. Every year since 1983, Mason has travelled there to study one of the most spectacular biological phenomena in the world. Each May, over 70,000 red-sided garter snakes—the largest gathering of any kind of vertebrates or animals in the world— awaken from an eight-month hibernation and come out of the limestone caverns to engage in a feverish mating ritual.

Within dense aggregations or large mating balls, male snakes are able to pick up the scent of a female snake due to her chemical secretions, leading to a frenzied contest where nearly 100 male snakes can try to mate with a single female snake. Mason’s field research in Manitoba helped him to identify the chemical composition of pheromones and, finally, in 1989 he was able to synthesize and produce a reptile pheromone in a test tube that worked just as well as the naturally occurring pheromone.

It is also in the snake dens of Manitoba that Mason and his students have made many of their key significant biological discoveries over the years. Mason has also found opportunities to apply his research to help in the conservation of the species.

A few years earlier, in a very well-publicized event, Mason sprayed pheromone—manufactured in large barrels in his lab at Oregon State—in six-inch tunnels specially constructed for the garter snakes. The pheromone trail would serve to lure the animals into them. This was done because 20,000 snakes each year were being crushed to death by cars as they slithered across Highway 17 after mating. The experiment was a success; the snakes found safe passage through the tunnels built under Highway 17 and fatalities reduced drastically.

Mason and his collaborators have also pioneered original research in the areas of reproductive endocrinology, evolution of chemical communication systems and behavioral ecology in reptiles. These help scientists to understand how chemical signals are produced, the degree to which environmental stressors affect reproduction and the influence of various mating systems and strategies on reproduction in garter snakes. Mason’s recent research focuses on his discovery of the Harderian gland, the largest cephalic gland in garter snakes and its crucial role in the transfer of pheromone signals to the vomeronasal organ and the brain.

Legacy as a teacher and scientist

Mason is widely known by the affectionate nickname “Snake Scientist” after a famous children’s book by that name which chronicles his work at the Narcisse snake dens. Sy Montgomery’s 1999 book brought the exciting and inspiring life of a field scientist home to children all over the world. Mason is the rare scientist whose research pursuits have captivated the wider public, and he has been featured in media outlets such as the New York Times and in a viral National Geographic video that has been viewed millions of times.

Mason started his career as a postdoctoral researcher in the biophysical chemistry laboratory at the National Institutes of Health (NIH). He cherished his time there working with the world’s best chemists and experts on insect and vertebrate pheromones. But when NIH offered him a permanent job doing research that he loved, Mason realized that he would rather have a career where he could teach and do research with students.

Since joining OSU in 1991, Mason has distinguished himself as an outstanding educator and mentor who has inspired and guided many students to research careers in zoology and herpetology. He teaches the department’s highly popular course on vertebrate biology, bringing to it his distinctive gifts as an ace scientist.

“Because I read and review the primary literature in the field, I am able to present cutting-edge research to my students before it makes it to textbooks, which can be a slower process.”

Mason has served as research advisor to many master’s and doctoral students who have gone on to successful careers as academics in universities across the United States and around the world.

“What I am most proud of is my students. I have produced students who are reproductive biologists and chemical ecologists and they have students of their own. This line of work is being passed on to the next generation of students.”

He has published more than 150 research articles in top zoology and science journals, including Nature, Science and The Proceedings of the National Academies of Sciences. He is a co-author of the book, Chemical Signals in Vertebrates.

Mason has also garnered many top honors for both his research and teaching. He was an Education Fellow in the Life Sciences at the National Academies of Science and is an elected Scientific Fellow of The Zoological Society of London. Mason has been honored with the Milton Harris Award in Basic Research, the Thomas T. Sugihara Young Faculty Research Award and the Mortar Board Society’s “Top Professor” Award at Oregon State. He is also a five-time nominee for the Loyd Carter Award for teaching excellence in science.

The F.A. Gilfillan Memorial Award winner delivers the annual Gilfillan public lecture. Thirty one faculty in the College of Science have received the Gilfillan Award since its inaugural lecture in 1984. Physicist Janet Tate was the 2015 recipient of the Gilfillan Award and presented a brilliant and engaging talk titled, “It’s a Material World.”

Past celebrated Gilfillan awardees include chemistry professor Mas Subramanian who spoke about “Pathways of Discovery: Designing a New Colorful Materials World,” microbiology professor Steven Giovannoni who presented Ancient History: Microbial Origins and the Greening of Earth” as well as biochemistry and biophysics Professor Andrew Karplus, who presented “Investigative Reporting on Proteins: Getting the Scoop on Nature’s Tiniest Machines.”