Third-year BioHealth Sciences Major Breanna Repp got started on the path to healthcare early. Growing up going to anatomy exhibits at the Oregon Museum of Science and Industry (OMSI) and seeing healthy and diseased organs side-by-side made a strong impression on her. “My mom said, ‘That’s what your lungs will look like if you smoke. The body is a vessel,’” Repp said. “That lesson made it very clear what the body is for, and what can happen if you do certain things to your body.”

Repp drew on her early experiences of anatomy to inspire her research with the Summer Undergraduate Research Experience (SURE) Science program the summer after her second year. SURE Science allows students from the College of Science to conduct paid, full-time research over the summer alongside instructors from any college.

Turning points on the path to healthcare

Repp grew up in Oregon City, outside of Portland. In high school, she attended engineering fairs and cheer camp at Oregon State, and the campus “just felt like a college,” Repp said. Although she visited several schools, “to me, college was Oregon State.”

Knowing she wanted to be on the path to healthcare, Repp found that the College’s BioHealth Sciences major was a great fit to pursue her interests and form a cohort of peers. With seven different pre-professional options, the curriculum combines a strong foundation in biological science with its application to human health and society. Repp’s pre-med option meets most or all of the requirements for admission to medical schools across the U.S.

“It’s able to pull in all these different topics, giving me a variety of perspectives,” said Repp of her major. “Most people I meet, we all know we went on this track to get a really comprehensive look at healthcare.”

A human anatomy and physiology course at OSU proved to be a turning point for Repp, when the class started working with human cadaver donors.  “It’s a really special experience for students to work with the donors,” said the instructor for the course, Devon Quick. “It helps develop empathy for individuals who are in their most vulnerable state.”

The opportunity to learn from people who had donated their bodies to science, feel chest compressions and tug on muscles filled Repp with an immense sense of respect and responsibility, taking her understanding of what it means to be a healthcare provider to a new level. “I knew I would never learn science properly without seeing it on the donors,” she said. “That was a pivotal moment for me.”

Repp says that Quick modeled a whole-person approach to healthcare, combining a deep knowledge of biology and the underpinnings to diseases with attention to social topics. “She seems like she really cares about us and works hard to make sure we’re all doing well,” said Repp. “I really respect a professor when they can look at their students and ask themselves what do these people need other than this class — you know, behind the scenes.”

Uncovering the root of health outcomes

Feeling a responsibility to put her knowledge to good use, Repp got thinking about what contribution she wants to make to the healthcare industry. In the course of her epidemiology research, Repp came across a surprising fact: The U.S. has the highest maternal mortality rate among developed countries. “It’s something you don’t hear about, and it’s very alarming,” said Repp.

Though largely preventable, maternal deaths have been increasing in the U.S. over the past two decades. In comparison to other high-income countries, the U.S. has an undersupply of maternity care providers, especially midwives. The U.S. is also the only developed country that does not guarantee provider home visits after a birth and paid postpartum leave, despite the fact that most maternal deaths occur during this period.

“We’re really far advanced in innovation and new procedures in the U.S., but our outcomes are not lining up,” said Repp. “I’ve always been on the path to wanting to become a doctor. But will I just be contributing to an unjust system? Or can I change some things?”

Repp is considering a master’s in public health in addition to medical school, so she can one day have a voice in changing policy and making a difference on a systems level. “I think if I could choose,” she said, “I would be a doctor in a pretty large hospital, doing public health advocacy, health promotion, and facilitating teams to teach prevention and get resources out to people.”

In the meantime, Repp continues epidemiology research for her Honors College senior thesis, also with Takata. “With SURE, I was basically learning how to do research,” said Repp. “This time around, I’m taking it into my own hands a little bit more.” Like her research with SURE Science, her thesis will illuminate how unexplored components affect health outcomes, possibly focusing on women's health or reproduction.

“A lot of people have heard that breastfeeding reduces breast cancer; that’s conclusive,” she said. “What’s something that’s not conclusive, but we see some connection?” Digging into the factors influencing maternal mortality could reveal what policy changes would be most beneficial in bringing the U.S. up to a higher standard of women’s healthcare.

Self-care as a public health issue

With her background in epidemiology, Repp has developed a broad and systematic view on health — including the mental and emotional health of herself and her community. “I don’t know if I could do my classes without having a good group of people I’m able to study with,” she said. A strong network is vital for sustaining success as a science student. She advises future students to “really utilize your professors. I think College of Science professors are really good at giving you review times and office hours and really want you to learn and understand.”

Outside of her studies, Repp invests in her community as volunteer coordinator of the OSU Pre-Medical Society, which has adopted upkeep of a local park in partnership with the city of Corvallis. She is also an Academic Learning Assistant, mentoring her peers in strong academic habits and university resource engagement.

Throughout her rigorous academic program, Repp says her biggest challenge has been handling anxiety. Using mindfulness, she harnesses the energy that causes her anxiety as fuel for her ambition and high performance. Although compartmentalizing is a challenge, Repp stays grounded by reading fiction and spending time with her five nieces and nephews. “Sometimes I feel like I should be doing more, but then I remember: Mental health is important!” 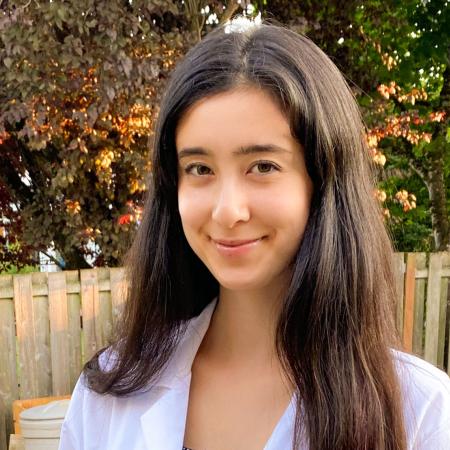