No one who knows biochemistry and molecular biology senior Ilana Gottfried-Lee is surprised to hear that her greatest passion is synthetic biology, a new field of science that works to re-engineer life.

Joining the biochemistry department in 2018, she first discovered biochemistry Professor Ryan Mehl’s research as she was combing through a list of undergraduate research opportunities in the Undergraduate Research, Scholarship and the Arts (URSA) Engage scholarship program, which helps pair undergraduates with a faculty mentor in a research area of their interest. “I was kind of infatuated with this idea of genetic code expansion,” she said.

Since then, she has spent the past two years performing cutting-edge research under the guidance of Mehl and biochemistry and biophysics Research Assistant Professor Rick Cooley in the Unnatural Protein Facility. Her work has been published in the Journal of Molecular Biology and she has presented at conferences including the OHSU Chemical Biology and Physiology Conference. After graduating this spring, she plans to continue research in the Mehl/Cooley group for another year before applying to graduate schools.

Still more impressive, as Cooley explains, is her success “in developing an entirely new directed evolution system, and showing she could use it to reprogram how cells make proteins.” This ongoing research has taken Gottfried-Lee into a new area of the already-novel field of chemical biology, and has captivated her since she first began the project in 2019.

"Ilana is fearless. She refuses to accept failure and will become an important role model for all women in science.”

“Ilana is fearless,” said Cooley. "She will take on any challenge with passionate enthusiasm, and do whatever it takes to see it succeed. She refuses to accept failure and will become an important role model for all women in science.” 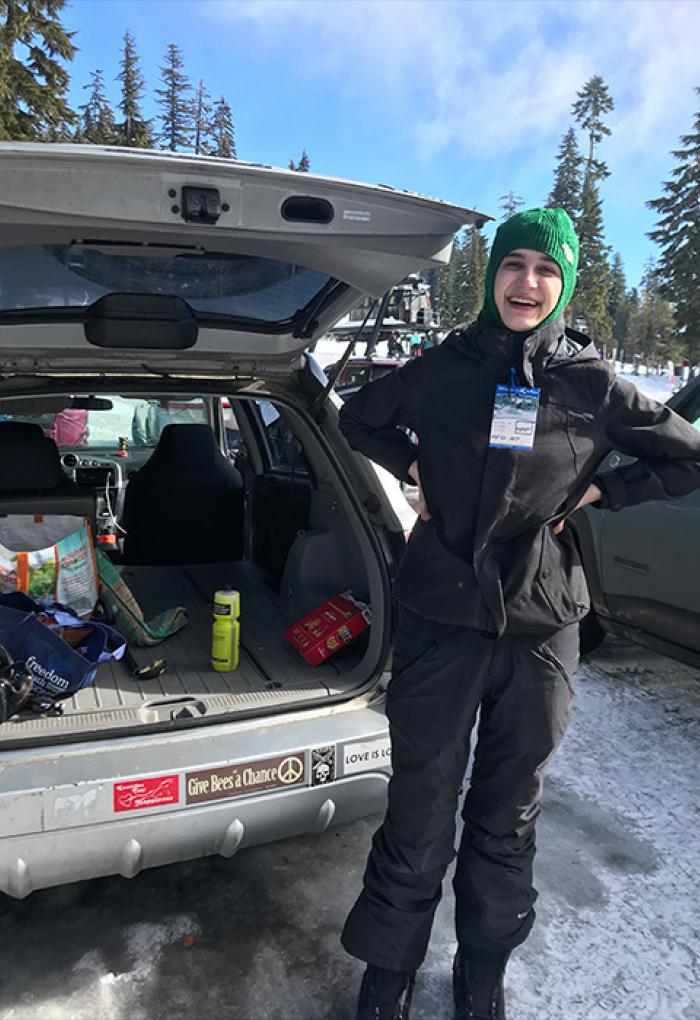 Native to Portland, OR, Gottfried-Lee showed an early aptitude for math and science – even attending a magnet school that specializes in these areas. By the time she got to high school, she had already completed the entire math series required for graduation and many of the science courses. Though clearly a gifted learner, a lack of challenging high school coursework ultimately led to a growing disinterest in school. “I just kind of plateaued,” she said.

Rather than attending college immediately after graduation, she took a two-year hiatus working in the restaurant industry. Acting on recommendations from her coworkers, she decided to apply for OSU’s engineering program. “Initially, it was a lot less of a desire to actually pursue science or engineering as much as it was to get a high-paying job,” she said.

“It has the benefits of a large university with lots of diverse research, student jobs and funding for research, but I’ve also had a pretty easy time finding a close-knit community.”

“I didn’t really expect to like OSU very much when I started, but it ended up being great,” she said. “It has the benefits of a large university with lots of diverse research, student jobs and funding for research, but I’ve also had a pretty easy time finding a close-knit community.”

One term later, Gottfried-Lee still didn’t know what she wanted to study – but she knew chemical engineering wasn’t it. On the suggestion of her Exploratory Studies advisor, she began meeting with advisors from other departments to see what appealed to her. Kari van Zee, head advisor of the biochemistry department, made a lasting impression.

"Kari is the best academic advisor," she said. "She took me on a tour of our little floor in ALS and explained all these posters to me. We stopped in all the labs and everyone was so nice.”

Shortly after their meeting, Gottfried-Lee decided to change her major to biochemistry and molecular biology. “I didn’t totally know what I wanted to do… It just kind of made sense,” she said.

Igniting a passion for science

Perhaps unsurprisingly, Gottfried-Lee was most drawn to chemical biology from the start of her scientific career.

“The first thing that really appealed to me that was even in the realm of molecular biology or biochemistry was in my introductory biology class,” she said. “They had a slide that was essentially talking about making synthetic life and modifying living systems to be used as biosensors – proteins that can sense things like toxins.”

Mehl’s URSA project followed a similar line of understanding. “It seemed pretty interesting, so I went to talk to him,” she said. “He really sold what they were doing.”

“Ryan has been an amazing mentor to me. I have gained a lot of confidence from knowing him because he treats me like a full scientist and is proud of the progress I've made since first meeting him as a naive second year,” she said.

“It was a good way to get a lot of confidence, and everything was set up for me to be really successful early on.”

“I got to wrap up this super successful research project that got published pretty quickly,” she said. “It was a good way to get a lot of confidence, and everything was set up for me to be really successful early on.”

After URSA funding ran out, Gottfried-Lee was awarded a Summer Undergraduate Research Experience (SURE) fellowship that provided funding to work full time over the summer with Cooley. “It’s a pretty tight-knit group,” she explained. Although her URSA finding had been through Mehl, and SURE funding with Cooley, she continues working closely with both professors under the umbrella of the Unnatural Protein (UP) Facility.

“When you think about the work we do in the biochemistry and biophysics department, a lot of the time it’s about making really difficult proteins and studying them in isolation,” she says. Traditionally, these are proteins that exist in nature and are analyzed using chemical and/or physical tools to gain new understanding.

Rather than studying existing living systems, the UP Facility attempts to introduce unnatural or synthetic components that give proteins new functionalities. The process, known as genetic code expansion (GCE) is one of the most recent innovations to emerge in the 21st century and is rapidly gaining traction in the scientific community. It’s not hard to see why.

“Proteins are these incredible macromolecules that are involved in every single life process,” says Gottfried-Lee. In nature, proteins comprise some twenty amino acids that are encoded in the genetic code through a process called translation.

“If we can take advantage of the things that life has done super well, we can use those life processes to reduce inefficiency.”

Genetic code expansion allows researchers to expand the alphabet of amino acids in a protein from twenty, to potentially hundreds. This is an involved process. First, the amino acids are synthesized using organic chemistry, and then supplemented into the media that is fed to the cell. Next, scientists in the Mehl and Cooley research groups engineer specific that are able to recognize these amino acids and incorporate them into the protein. This modification process is known as directed evolution – the development of which received the Nobel Prize in 2018.

“I’m really interested in designing better enzymes to break down environmental toxins. Or, for example, a lot of chemical processes are done in really harsh toxic conditions with organic solvents or heavy metal catalysts that are terrible for the environment,” she said. “If we can take advantage of the things that life has done super well, we can use those life processes to reduce inefficiency.”

Most of the research in the Mehl/Cooley labs focuses on modifying a single enzyme – the tRNA synthetase – which attaches the unnatural amino acid to a tRNA that is then incorporated into the protein during translation. Gottfried-Lee’s research dives into even newer territory. Rather than focusing on the synthetase, she works to evolve other components of the system to better accommodate the amino acid.

“Ever since life has existed with ribosomes and proteins, we’ve had this process of translation that’s evolved to work perfectly for each amino acid that naturally occurs,” Gottfried-Lee said. “The system has evolved over hundreds of millions of years to be super specific and efficient for twenty things, and now we’re trying to make it work for hundreds of different things.”

"I have grown used to being blown away at every one of Ilana’s research meetings.”

“Ilana started an independent project in our lab that was particularly challenging; one that I was hesitant to give to someone so early on in their development,” Cooley said. “I expressed the high risk nature of the project to Ilana, but she didn’t care. Instead, she saw it as an opportunity to prove what she could do.”

The level of difficulty and perseverance required was greater than even her mentors had anticipated and lacked previous studies to help guide the way. Despite many setbacks, after that first summer her accomplishments exceeded expectations.

“Ilana is the unicorn of research undergrads,” said Mehl. “Not only does she return with beautiful publication-quality data but also with a detailed presentation of all the failed attempts that led her to the successful results. I have grown used to being blown away at every one of Ilana’s research meetings.”