The College of Science welcomes Terry Hughes, director of the Australian Research Council (ARC)Centre for Excellence for Coral Reef Studies headquartered at James Cook University, who will present a talk on the health and future of the Great Barrier Reef on Thursday, April 25. In 2016, Hughes was dubbed “reef sentinel” by Nature Magazine, and was recognized in Nature’s 10 as one of the “people who mattered” that year. 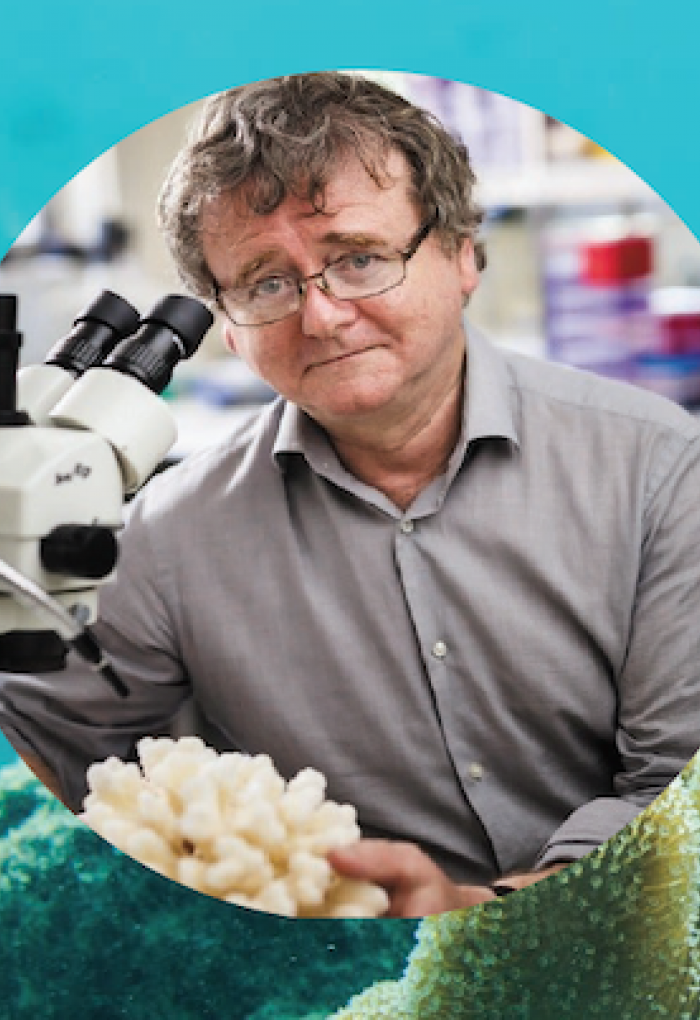 Hughes’ talk, entitled “Great Barrier Reef: What are its chances?”, begins at 3 p.m. on April 25, followed by an hour-long panel discussion at 4 p.m. and a marine science poster session from 5-6 p.m. The Science Panel Discussion features Rebecca Vega-Thurber, associate professor of microbiology, and Virginia Weis, an OSU Distinguished Professor of Integrative Biology.

The Oregon State community is welcome to attend all of the events, which will be held at the LaSells Stewart Center in the Construction & Engineering Hall. The events are co-sponsored by the College of Science, Department of Integrative Biology and the Valley Foundation.

Please RSVP to reserve a spot today. If you can’t make it to campus for the lecture, register and then watch it online via live stream!

For more than 30 years, Hughes has dedicated his life to researching the health of coral reef ecosystems and their interconnections with humanity at large. In his lecture, Hughes will explain his seminal work that brought the bleaching of the Great Barrier Reef—the largest reef in the world—to international attention in 2016, and why it matters even more now. Hughes has dedicated his life to studying coral reefs around the world, and has published over 130 papers, many of which highlight the dangers of climate change.

“It is a fact almost beyond comprehension: In the summer of 2015, more than 2 billion corals lived in the Great Barrier Reef,” Hughes reported in an interview with The Atlantic. “Half of them are now dead.”

Although coral reefs make up a small percentage of ocean floor coverage, scientists believe they contain even more biodiversity than a tropical rainforest – or anywhere else in the world. The corals themselves are made up of delicate living organisms, which live symbiotically with tiny colorful algae known as zooxanthellae. The zooxanthellae live inside the corals, and provide them with energy as well as their color.

Corals are particularly sensitive to changes in temperature. Climate change-induced spikes in global temperatures cause corals to lose their zooxanthellae, which leads to starvation and often death. At extreme temperatures, distressed corals may die immediately, leaving a white skeleton barren of the nutrients the reef ecosystems depend on, which is known as mass bleaching.

The first mass bleaching event ever recorded occurred in 1998, and since then it has become an increasingly significant problem. A heatwave from 2014-17 caused a third mass bleaching event that affected more than 75% of tropical corals throughout the world. At the Great Barrier Reef, one in two of the century-old corals has been unable to survive. Hughes’ research also shows an 89% decline in the birth of coral babies, meaning that there will be few to replace the ones that died.

“It is a fact almost beyond comprehension: In the summer of 2015, more than 2 billion corals lived in the Great Barrier Reef,” Hughes reported in an interview with The Atlantic. “Half of them are now dead.”

Fortunately, Hughes believes there is still a glimmer of hope for the corals remaining in the Great Barrier Reef, and around the world. But humans have to act fast.

“As a climate scientist, I think I have a civic responsibility to communicate to whoever will listen about issues around climate change, particularly climate change and the Great Barrier Reef,” Hughes explained in a recent interview with The Carbon Brief.

Please join us for this important event with an internationally recognized marine scientist and global leader in applying multi-disciplinary science to securing reef sustainability.