Biophysicist Elisar Barbar and team have discovered that the intrinsically disordered state of the protein ASCIZ, a key transcription factor within cells, plays a major role in regulating production of the protein LC8. LC8 is a hub protein regulating over 100 other proteins critical to a wide range of life processes, from tumor suppression to the precise trafficking of molecules across the cell nucleus border.

Barbar’s research, recently published in eLife, has far-reaching implications, shedding light on how intrinsically disordered proteins (IDPs) like ASCIZ provide unique advantages to cells. IDPs are a hot frontier of research in biochemical and medical research due to the critical role they play in a diverse array of cellular functions and the fact that they are poorly understood. IDPs constitute more than 60 percent of transcription factors across all eukaryotic cells. 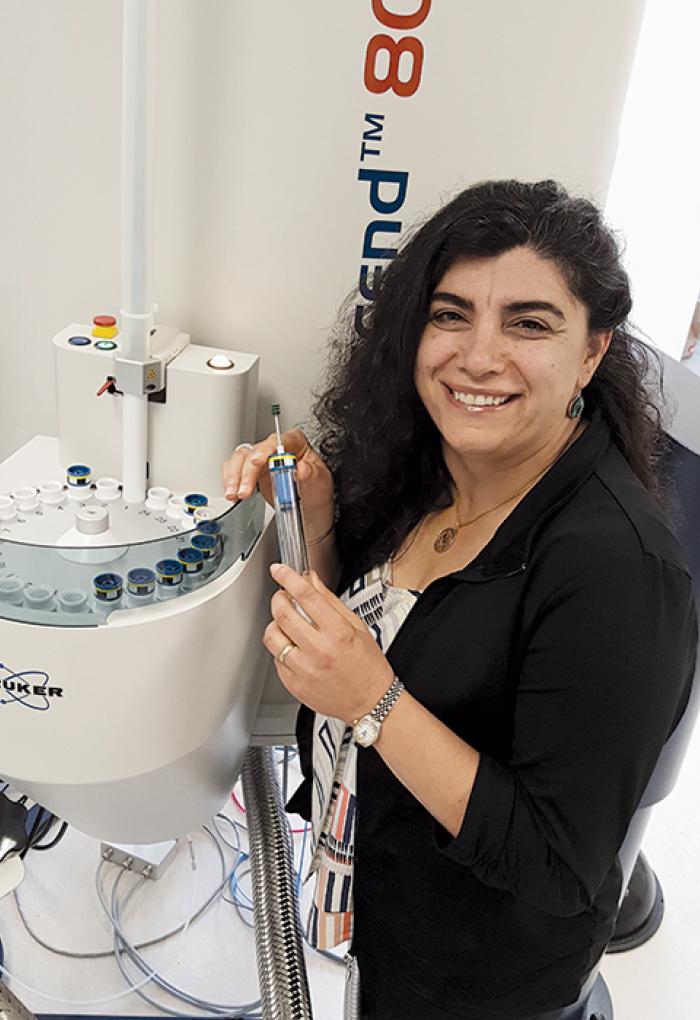 Why are intrinsically disordered proteins important?

Proteins are large, complex molecules made up of chains of amino acids that fold into a specific three-dimensional (3D) structure. The shape of each protein is critical to its purpose, whether it ends up as a structural component of body tissues, an enzyme or an invader-destroying antibody. IDPs like ASCIZ are unlike regular proteins, which have a unique, fixed shape. Instead, they have regions that do not fold into a three-dimensional shape but remain more elongated and often highly flexible, able to take on different shapes under different circumstances. This volatility makes them “notoriously difficult to study,” says Barbar.

The intrinsically disordered protein ASCIZ is a transcription factor of unique interest because it is associated with DNA damage repair and is regulated by binding to multiple copies of its own gene product, the protein LC8. ASCIZ has 11 binding sites for LC8 in humans and seven in fruit flies, demonstrating that multiple LC8 sites are evolutionarily conserved and therefore important.

How does an IDP fine-tune cellular protein production better than a regular protein? Rather than a simple on/off switch – whereby a critical volume of LC8 binding to ASCIZ would halt production, only to start it again once levels dropped low enough – the intrinsically disordered area of ASCIZ dynamically changes shape to reveal or hide LC8 binding sites, depending on how many of them are occupied. As an organism’s production of LC8 increases, the higher levels of ambient LC8 do not continue to occupy available ASCIZ binding sites in a linear progression. Rather, as more LC8 molecules bind to it, the ASCIZ protein dynamically changes shape to make full occupation increasingly difficult. The net effect is to dampen production of LC8 rather than to shut it off altogether.

“Our work suggests that the formation of dynamic complexes could be a widespread mechanism for regulating transcription, thus enhancing our understanding of this important class of proteins,” says Barbar.

“Much more research is required to fully understand the function of intrinsic disorder in transcriptional regulation, and the development of new methods and techniques as we do here will be vital in moving this field forward.”

This work is funded by the National Institutes of Health and by the 2017 College of Science Impact Award, which carries a $10,000 stipend thanks to philanthropic gifts and a match from the Provost’s Office to support early-stage research or innovation that addresses a 21st century issue.

“I am thrilled to see the impact of this award, “ said Roy Haggerty, dean of the College of Science at OSU. “It demonstrates how Oregon State science is enhancing scientific research and advancing our understanding of human health."