Honors senior biology major Swechya Banskota grew up in a village near Kathmandu in Nepal until the age of 12 when things changed dramatically. With sponsorship assistance from her uncle after winning the Diversity Visa lottery, Banskota’s family moved to Portland where she found herself in a new school and a foreign country in the middle of sixth grade.

Although she liked her teachers and enjoyed school in Portland far more than she had in Nepal, Banskota recalls being shy and withdrawn throughout her middle and high school years, often struggling to find her feet and her identity in this new environment.

After four years at Oregon State University, Banskota has broken through her shell and transformed into a confident and poised leader and peer mentor.

Her immigrant background, Banskota says, had already given her a taste for hard work and sacrifice as well as schooling in the core values of compassion and tolerance. But her time as a science and Honors College student at Oregon State opened up opportunities to try out something that she hadn’t before: leadership.

“Coming here as a teenager from Nepal, it was very difficult for me to feel I belong. I faced language and cultural barriers. At OSU, I learned to take initiative and developed leadership skills through various roles and responsibilities.”

Banskota started small. She was a media information coordinator on campus in West Hall, home to students in the Honors College. From there, she moved on to other leadership positions in the Honors College Student Association (HCSA) and the College of Science Student Advisory Board. As the Service Chair of HCSA, Banskota helped organize the ambitious and elaborate Food Drive in February 2017 to combat hunger. The event was a huge success, surpassing the amount of food donations raised in previous years.

Banskota was awarded the prestigious Ford Family Foundation Scholarship at the beginning of her undergraduate studies, which met nearly 90% of her financial need, making it possible for her to focus on academics at OSU and graduate debt-free. She has also received the Merrill Family Foundation Scholarship and the Dr. Amy Chadburn Pre-med Scholarship from the College of Science. These awards have helped Banskota achieve her academic goals and have inspired her to give back to the community.

She cherishes her work as a Peer Mentor in the Department of Integrative Biology and in the Honors College which saw her mentoring incoming freshmen. As a Ford Foundation fellow, Banskota has also mentored other Ford scholars at Oregon State.

“I have been a mentor to six students. The experience allowed me to reflect on my work at OSU so far, give feedback, guide new students to opportunities and give them advice on leadership skills. It was a good way for me to develop my communication skills and an opportunity to become a leader in another sort of way,” said Banskota, who is now good friends with the students she has mentored.

A summer internship in the Michigan Clinical Outcomes Resources and Reporting Program (MCORRP) has been yet another significant and transformative experience for Banskota.

Founded by Dr. Kim Eagle, an Oregon State alumnus (B.S.’76) and director of the Cardiovascular Center at the University of Michigan, MCORRP is a rigorous and impactful patient outcomes research and reporting laboratory that maintains comprehensive heart disease registries to study and improve quality of cardiovascular care in both the United States and in the world.

Dr. Eagle funded a scholarship for one Honors College student to attend the internship program at MCORRP. Banskota was selected from a pool of outstanding applicants to be the first recipient of the scholarship, which covered airfare and provided a stipend and a housing allowance for the 10-week program 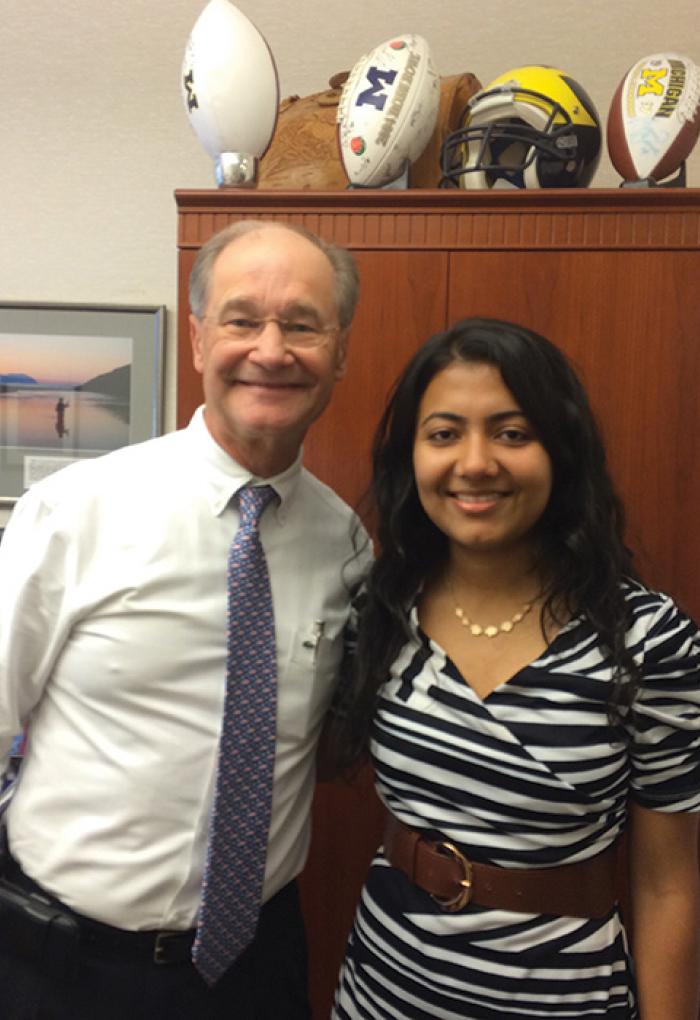 She was part of a group of 35 students from 15 universities who immersed themselves in clinical research projects, shadowed physicians, gained valuable exposure to cardiology, and participated in the clinic’s outreach activities.

As part of her work, she abstracted data for the International Registry for Aortic Dissection (IRAD) and completed a research project on “Post-Operative Cardiac Tamponade in Type A Dissection Patients,” under the guidance of Eagle.

In fact, Banskota was so impressive that she got hired as a Student Leader in MCORRP to help coordinate its student internship program this summer. Eagle is effusive in his praise for Banskota.

“Swechya’s intellect, compassion and organization skills are phenomenal. She has a spark for her work, her colleagues and for life that is infectious!” remarked Eagle.

He is eager for her to resume work in the cardiovascular center after graduation.

“Because her performance was so extraordinary, we have asked her to return for a second summer this year working as a student leader. In this role, her leadership skills will help us bring our program to nearly 40 students from around the country,” added Eagle.

Banskota is looking forward to applying to medical schools in the near future, and her experiences at Eagle’s Cardiovascular Center have not only solidified her desire to enter the medical profession, but have also illuminated for her the larger social and humanitarian aspects of modern medicine.

“Being mentored by all the great doctors at the Cardiovascular Center has taught me that I, too, want to be a doctor who does similar things. The big takeaway for me is that as a physician you can do so many things that involve outreach and service to the community,” said Banskota.

Artistic representation and the immigrant experience

While she has excelled as a science student and will graduate with an almost perfect GPA, Banskota has also found ample opportunity to give shape to her passion for arts and literature in the Honors College. In her creative writing honors thesis, Banskota strives to give voice to the experiences of Nepalese immigrants and expand the possibilities for multicultural children’s literature in America.

She has illustrated and written a graphic novel depicting different aspects of the identities Nepalese-American children through the medium of fiction. Partly autobiographical in nature, Banskota drew on her own memories as a transplanted adolescent in America. Banskota was inspired to take up this creative writing project after she realized that there was barely any representation of young Nepalese-Americans in mainstream American children’s literature.

“I definitely realized that there wasn’t much by way of Nepali literature for children growing up here, but I didn’t realize I could do something about it. I feel it is very important to feel represented and it gives you a sense of belonging.”

Over the years, Banskota’s family has adapted to a life in Portland. Her father is a human service specialist in the Department of Human Services and her mother works as a beautician and also at Safeway grocery. Banskota’s younger brother will begin his second year at the University of Virginia. But she will always remember and draw inspiration from her parents’ early years of struggle.

“The first few years in America were tough for my family pretty much in every way. There was little financial stability. My mother went to community college to learn English so she could get a job. My parents worked very hard to get us where we are,” said Banskota.

The greatest gifts from her parents, Banskota believes, have been her strong work ethic, a sense of compassion and an unwavering faith in the value of education which will continue to inspire her as she makes her way in the world.

Update: Banskota is currently a medical student at the Warren Alpert Medical School of Brown University.