Bethany Matthews, a physics graduate student, recently won a U.S. Department of Energy Office of Science Graduate Student Research Award. This prestigious award will see her continue her work on the physics of materials at the National Renewable Energy Laboratory in Golden, Colorado, this summer and into the fall.

Matthews was also the winner of this year’s Ben and Elaine Whiteley Endowment for Materials Research Fellowship, an endowment which will help support her research at the NREL. Matthews said that she applied for this fellowship at the eleventh hour after her peers urged her to. Though she spent only two weeks on her proposal, as opposed to the three months that is recommended, she was awarded the fellowship. 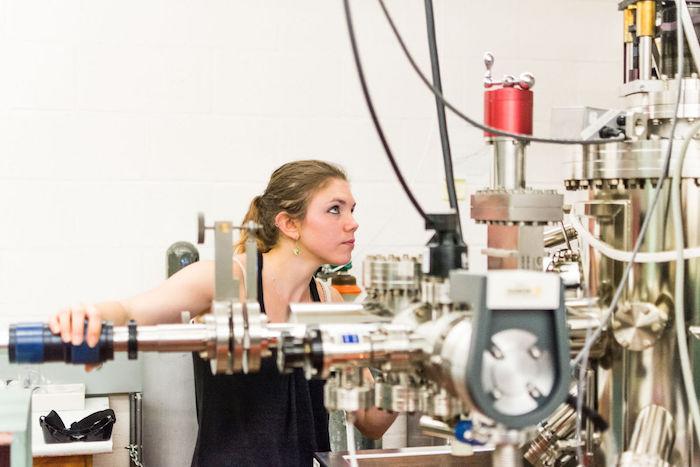 “If they were a crowd of people, and you had to put them in certain spots, the shape that you will see them in changes the way you could have a parade go through them. So different ways of arranging them allows for different things to happen, through the material,” Matthews said.

Fellow physics graduate student James Haggerty said that he has known Matthews for about five years, and worked with her for around three. In that time he’s gotten to know her well, both as a scientist and as a friend. According to Haggerty, Matthew’s work has been nothing short of exceptional.

“She’s been very driven and she’s very thorough,” Haggerty said. “She maintains a positive attitude about it, with the nature of science being so up and down.”

Matthews even runs marathons, which Haggerty thinks is a reflection not only of her dedication, but also of her analytic nature.

“A scientific mind would probably be more methodical in training for something like that,” Haggerty said.

According to Matthews, science can be tougher for women than for men, which is partially why she strives so hard academically.

“To me, as a woman, this award says to me that the scientists that board this fellowship think that I am as fully capable of contributing excellent science as any man, and that I am worth developing for my future contributions,” Matthews said. “It says to me that science is trying to change how it’s been and open itself to new minds and new ways of thinking.”

“She’s a very talented and determined person. I’ve appreciated that focus and determination,” Tate said. “She’s very good at getting to where she wants to go.”

According to Tate, it’s not just Matthews that is honored, but the physics department and all of OSU, as well. Others, Tate said, could certainly follow her example, and take advantage of all opportunities presented to them.

“She’s an Oregonian, a product of OSU,” Tate said. “She has opened up all kinds of possibilities for herself. I wish that for all my students.”