Since the mid-1990s, biochemistry professor Ryan Mehl has been working to find the perfect chemical reaction for attaching proteins to just about anything. One that would work so quickly and efficiently, it could change the way proteins are used in medical, material and environmental applications.

Such persistence is now paying off. Mehl, who is also chief technology officer of xBiologix Inc., has developed a reaction called ideal bioorthogonal ligation that accomplishes a goal sought by many other scientists: controlling protein deposition and orientation on surfaces. 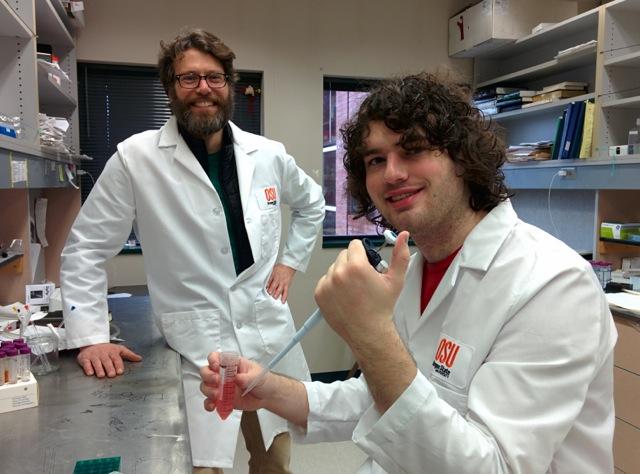 There are two different types of proteins: structural proteins and catalysts. Structural proteins serve as protective devices like skin and fingernails, while catalytic proteins accelerate most reactions in life. In consumer products like pregnancy and diabetes tests, for example, proteins have been engineered to bind with a specific chemical to produce a useful signal.

xBiologix’s technology uses ideal bioorthogonal ligation by adding new amino acids that allow a protein to react and attach in an orientation-specific way. Proteins naturally use 20 amino acids, but this method allows scientists to swap natural amino acids with unique ones, specifically reactive amino acids that do not exist in nature. The added amino acids serve as anchor sites, causing all proteins to align in the same direction. What Mehl calls the “special sauce” for the ideal bioorthogonal ligation is how the proteins can attach to anything incredibly quickly, but also cleanly. Mehl’s team is using this knowledge to develop medical and environmental devices — also known as sensors — that last longer and are more sensitive than those created by previous scientists.

Mehl says while there are many different applications for orienting proteins, xBiologix is focused on identifying how this technology can meet current market needs for protein materials.

Protein sensors could help make better antibody drugs, which are intended to kill only cancerous cells and maintain healthy ones. Currently, pharmaceutical companies are interested in using protein sensors for evaluating the binding of antibody drugs, but the sensors have a very short shelf life. Mehl says his technology could make protein binding sensors last longer.

Metabolite sensors like glucose and lactate sensors are marketable to both athletes and doctors. The desire is to have a metabolite sensor working in real-time, reporting on the status of a person’s response to surgery or exercise. Currently, these sensors are too big or do not last long enough. xBiologix’s technology, however, is working to determine which orientation optimizes sensor activity and stability. This would ultimately increase the sensor’s working life and reduce its size.

Mehl adds that many other sensors and processes could be feasible if xBiologix finds a way to orient all proteins correctly.

“For every sensor that’s on the market, 100 have failed,” he says. “If we could take 10 out of that 100 and make them feasible because of our technology, we’ll be in a great place.”

xBiologix has exclusively licensed the patent-pending technology owned by Oregon State in the field of attaching proteins to materials and surfaces, excluding protein drug therapeutics. Mehl says the company’s main goal is to identify how this technology will better serve current needs prior to developing fundamentally new protein materials.

“The goal of the company is to harness the power of nature’s proteins and make them work for whatever applications they can be used for,” Mehl says. “We truly believe that all proteins, if oriented and stabilized, will afford us a significant advantage for protein materials and medical sensors.”

For licensing inquiries, contact Jianbo Hu at jianbo.hu@oregonstate.edu or 541-737-2366.