Natalie Hambalek, an Integrative Biology master's student, is very much at home in the frequently disconnected worlds of political advocacy and scientific research. This year, she was one of four students nationwide to receive the Graduate Student Policy Award by the Ecological Society of America (ESA).

ESA, which recently celebrated 100 years, is the largest professional society devoted to the science of ecology. Hambalek, who says she never misses an opportunity “to share science with different stakeholders,” was keen to apply for the ESA award because it nicely bridged her interests and achievements in science and policy.

The ESA chose Hambalek and other awardees for demonstrating “a commitment to engage in public policy” and for their prior substantial experience in science policy work.

The organization inspires award winners like Hambalek to further their policy interests by providing them hands-on, science policy experience where they interact with congressional decisionmakers, federal agency officials, and others engaged in science and public policy.

As an ESA awardee, Hambalek got an invaluable opportunity to participate in the Biological and Ecological Sciences (BESC) Congressional Visits Day in spring 2015 in Washington, D.C. The two-day event brings together young scientists, such as Hambalek, to meet with lawmakers and discuss the current landscape of federal support for biological research. Participants also receive communications training and learn about the federal budget, the appropriations process and the political landscape.

Hambalek, who represented the states of California and Oregon, spoke about biological research and education in both states to senators and congressional representatives. Hambalek also expressed her concerns about the importance of preserving federal support for research and the House of Representatives America COMPETES Act, which ESA has criticized because it allows the federal government to set priorities for research programs at NSF and its various directorates.

“We visited seven legislature offices in Washington, D.C., including those of Ron Wyden, Barbara Boxer and Jeff Merkley. I actually got to meet with Merkley which was very exciting,” said Hambalek, referring to the U.S. Senator from Oregon.

Hambalek will be interviewed for ESA’s podcast, The Ecologist Goes to Washington and its blog. “The award definitely helps me build on my science communication skills and my networking skills,” she added. She added one more feather to her cap as a science communicator when she was recently selected as an Oregon Museum of Science and Industry (OMSI) Science Communications Fellow.

Hambalek learned about environmental policy as a delegate and representative of model United Nations on the Conference on Sustainable Development (Rio+20) in New York City where she focused on sustainable fisheries and global ocean policies.

At OSU, Hambalek is co-president of Women in Science. Last year, she and her team organized an “Outside the Lab” seminar series, which brought women with science graduate degrees to campus to speak about pursuing careers outside of academia. Hambalek, who aspires to a career in public policy, organized the seminar to help graduate students learn more about utilizing a scientific education in the fields of industry, public policy, journalism and other non-academic professions.

Engaging children with science early on is viewed as essential to their continued interest in and pursuit of STEM professions. And graduate students like Hambalek are making sure to do their part in this endeavor. 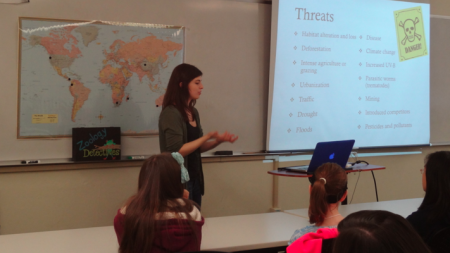 Hambalek speaking to middle school girls at “Discovering the Scientist Within”

Hambalek is involved with a number of campus programs that bring science to young children and she views her work with them as central to her policy outreach and scientific communication efforts. “I love teaching science to little kids and I am always looking for opportunities to do so,” said Hambalek.

Since arriving at OSU, Hambalek has participated every year in “Discovering the Scientist Within”, a program that aims to foster middle school girls’ interest in the sciences. In one of her educational activities with the program, she demonstrated a day in the life of a scientist to the students by giving them a tour of her advisor, Andrew Blaustein’s laboratory.

In Blaustein’s lab, Hambalek conducts research on amphibian physiological and behavioral responses to multiple stressors including pesticides and pathogens.

Born to an Armenian mother, who was raised in Ethiopia before migrating to the United States, and an American father, Hambalek doesn’t take any aspect of her education for granted and strives to make her time in academia as meaningful as possible. A first-generation college student, Hambalek overcame many personal and economic struggles to pursue her education. She has been both an LSAMP and a McNair scholar.