During summers, Jennifer Smucker drives combines to earn money for college. This is her fifth, and likely last, summer of crossing the fields at little more than 2 miles per hour, working days so long that she sees the late summer sunset from the cab. This fall, the newly-minted Oregon State grad will begin her Ph.D. in mathematics at Virginia Tech.

Smucker has always loved math. She reads poetry and plays the ukulele. She writes – and has published both online and in print – and hikes and sews. She enjoys science. But it’s the logic of math she loves.

“You get an answer on a test – it’s either going to be right or it’s wrong,” she says. “What you find is not necessarily arbitrary or dependent on someone else’s opinion. You don’t have to worry about whether or not the instructor is going to like what you said.”

But that doesn’t mean math is always easy. Graduating with a bachelor of science in mathematics means working through four years of tougher and tougher problems.

“The process of getting to the right answer is never very enjoyable for me,” Smucker says, “but once I get the right answer, there’s so much relief and joy from actually figuring out what it is. It makes the struggle worth it. This feeling of pushing through something that’s really difficult, to get to a final answer. If I got to the same result without the struggle, I wouldn’t enjoy the result as much – because I hadn’t worked so hard for it, you know?” 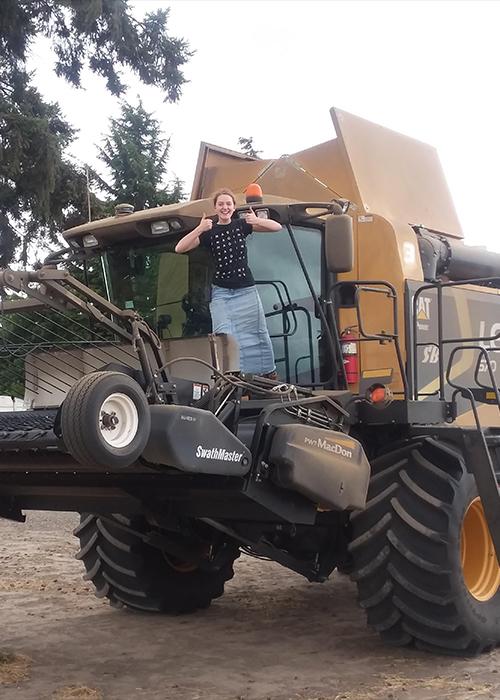 Jennifer Smucker drove a combine each summer to help pay for college. Now, she's looking toward a future as a Ph.D. student in Virginia.

Derailed by the pandemic, but still pushing forward

Smucker grew up in Harrisburg, a farming community near Corvallis. Freshman year she dual-enrolled at Oregon State University and Linn Benton Community College, attending classes at Linn Benton the first two years. Within this program, her transfer to OSU as a junior in 2019 was seamless.

Four siblings already had attended Oregon State, and Smucker looked forward to her own experience there. Her junior year was her first year on campus and began well, building memories and studying with classmates. “You know, bonding over shared struggle,” she says.

But as so many stories the last two years go … ”and then COVID.” Between her jobs and pandemic restrictions, Smucker missed out on some of the college activities she normally would have joined.

“What I like about science is that it takes along that math and makes it useful and applies it. But math is the thing I know the most of and understand the best.”

“I didn’t get to make a lot of connections outside of class, mostly because of COVID,” Smucker says. “But despite that I feel like I was very challenged in my classes and got to learn so many new and cool things. I’ve really enjoyed my time at OSU and feel like it’s been a really good experience for me.”

Discovering the means to the end

With her love for math, Smucker began college as a mechanical engineering major. “But I realized I just did not want to be an engineer and I’d much rather do some sort of teaching,” she says. Mathematics was her logical choice.

Teaching opportunities opened for Smucker well before graduation: As a junior, she taught middle and high school science at a small private school. As a senior, she tutored students in physics at Linn Benton.

“Part of the reason I chose math as a major was because it had a good helping of both math and science,” Smucker says. “What I like about science is that it takes along that math and makes it useful and applies it. But math is the thing I know the most of and understand the best.”

Yet figuring out the next steps for her future was more challenging. “I knew kind of what I wanted the end goal to be, but I was completely lost as far as how to get there,” she says. Tom Dick, her advisor, helped her figure that out.

“I came to him and said I’m thinking about getting my Ph.D. or maybe my master’s, but I’m not really sure what that would look like or what that would mean for me down the road. And he very much just talked me through … If you want to get your Ph.D., that means you’d have this sort of potential career path. If you want to get your master’s, you’d have these potential career paths.”

With Dick clearly laying out options and requirements, Smucker determined she was most interested in a Ph.D. in mathematics.

“It was my decision to get a Ph.D.,” Smucker says. “But kind of talking through the whole process and what I needed to do was extremely helpful.”

“I've always felt like needed to pave a path. That has influenced my journey.” 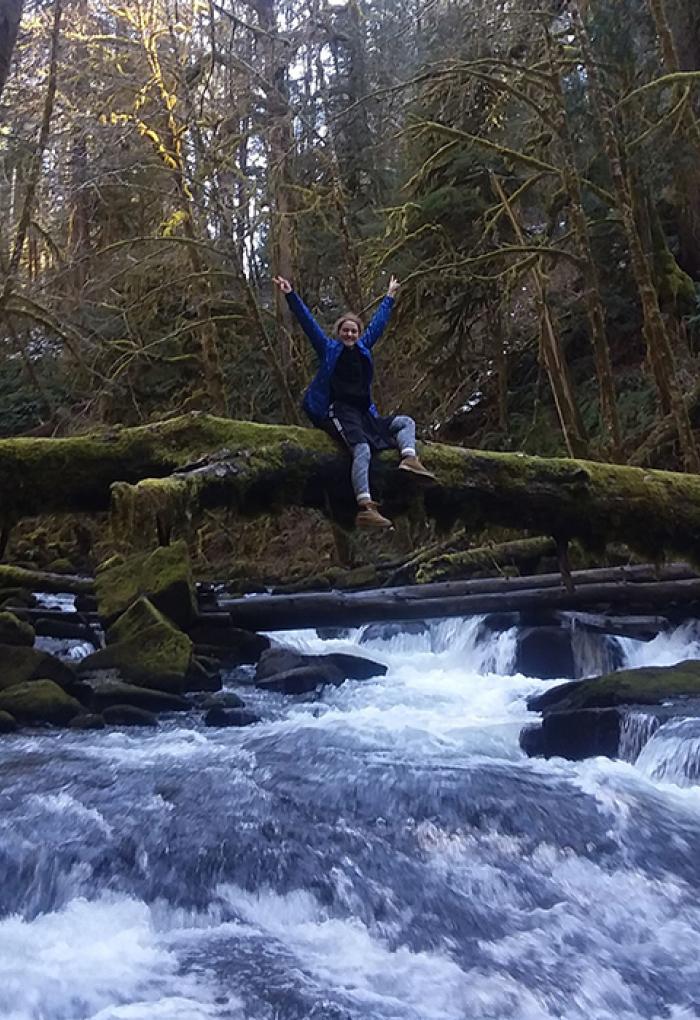 Despite her love of linear certainty, Smucker appreciates the mystery of exceptions. One of her favorite classes at Oregon State was non-Euclidean geometry.

“With regular geometry, you’re working in the way we think of and perceive the world,” Smucker says, “Where if you want to get to from point A to point B, the shortest trip is just a straight line from point A to point B. We have our standard ways for tabulating that distance, and that’s considered Euclidean geometry.

"I want other girls to know that if they like math and they like science, they have what it takes to pursue that."

“But in non-Euclidean geometry, the idea is that it doesn’t fit all those rules that come with the geometry we know. So it’s really just a fun mental exercise. You take everything you thought you knew about distances and points and just toss it out the window, and start to think of these new abstract ways; then it’s really fun.”

Non-Euclidean geometry made Smucker look differently at a discipline she knew so well. “So maybe it meshed with the part of my personality that likes to, I guess, be constantly seeing things in new and fresh ways,” she says.

Smucker is, perhaps, somewhat non-Euclidean herself. Though the fifth sibling in her family to attend college, among her peers in her community, a female leaving home for college – let alone in a STEM field – is a bit more unusual.

“I love this so much and I want other girls to know that if they like math and they like science, they have what it takes to pursue that,” Smucker says. “I think my desire to be a role model in that way has really pushed me to try to learn more, try to do better. I've always felt like I kind of needed to sort of pave a path. That has influenced my journey.”