What if air pollution could play a significant role in the neurological development of an unborn child? What if there was something we could do about it?

In a world where more than 92% of the world’s population lives below the World Health Organization’s Ambient Air Quality guidelines, Oregon State alumnus Andres Cardenas is searching for answers.

Working at the unique intersection of biomedical and environmental sciences, Cardenas, who completed his Ph.D. in 2015, has received funding to spend the next five years studying the impacts of prenatal and early childhood environmental stressors on children’s health and development.

"Oregon State was key. I cannot emphasize that enough."

An assistant professor at the University of California, Berkeley School of Public Health, Cardenas was awarded the Outstanding New Environmental Scientist (ONES) grant by the National Institute of Environmental Health Sciences to support his research over the next five years. This award will support his groundbreaking research on the effects that air pollution, exposure to heavy metals and diet have on the health of newborns and young children, and whether they play a role in the origins of diseases contracted later in life.

Cardenas credits the support he received from OSU faculty and staff for the tremendous success he has achieved since graduating. He spent nearly eight years on the Corvallis campus earning his bachelor’s degree in biochemistry and biophysics, master’s degree in biostatistics and Ph.D. in environmental health science.

“Oregon State was key,” he says. “I cannot emphasize that enough.”

Chasing a life of adventure

A native of Costa Rica, Cardenas did not grow up with a dream of becoming a scientist. In fact, when he graduated high school, he was convinced he would become an airline pilot.

Growing up in a town nearly four hours away from the nearest city, his defining years were spent largely outdoors where he nurtured a growing curiosity for the world around him. His parents – Alice Salazar and Jose Cardenas, a high school math teacher and engineer, respectively – had instilled a strong belief in education from an early age, and one that would ultimately inspire both Cardenas and two siblings to move to Oregon to pursue higher education.

Cardenas was forced to abandon his plans to become a pilot after the financial reality set in, and he began to look for other options. He first heard about OSU through his older brother who was already attending the university for mechanical engineering. “I remember he said, ‘you really need to transfer here, if you want to do science this is the place to go,’” said Cardenas.

Like his brothers, Cardenas attended Umpqua Community College for his associate’s degree, and was able to transfer the credits over to OSU. This was not only a cost-saving decision, but one that helped him substantially improve his writing and conversational English before starting at a large accredited university.

“I think this is really where being in higher education is so helpful. You can really find who you are, and find mentors that will help you navigate these decisions.”

“I remember very clearly, when we were touring OSU as transfer students I got to meet with some of the advisors as well. I walked by one of the posters in the biochemistry building, and I saw that it said ‘Biochemistry: Revealing how life works.’ That was the moment I realized I wanted to study biochemistry.”

Cardenas felt particularly drawn to research on genomics. “I just thought the whole process of replication, transcription and translation of genes is super interesting. How you pass on genes from one generation to another, and how organisms adapt to challenges,” he said.

Interestingly, even at this time, Cardenas did not envision a future career in these fields.

“I came from a small town where it felt like you could be a doctor, a teacher or a business person. It seemed like there were only so many things you could be, and a scientist was not one of them,” said Cardenas.

Instead, he focused his energy on what he believed would be a future career in dentistry or medicine, while continuing to gain more and more appreciation for science. 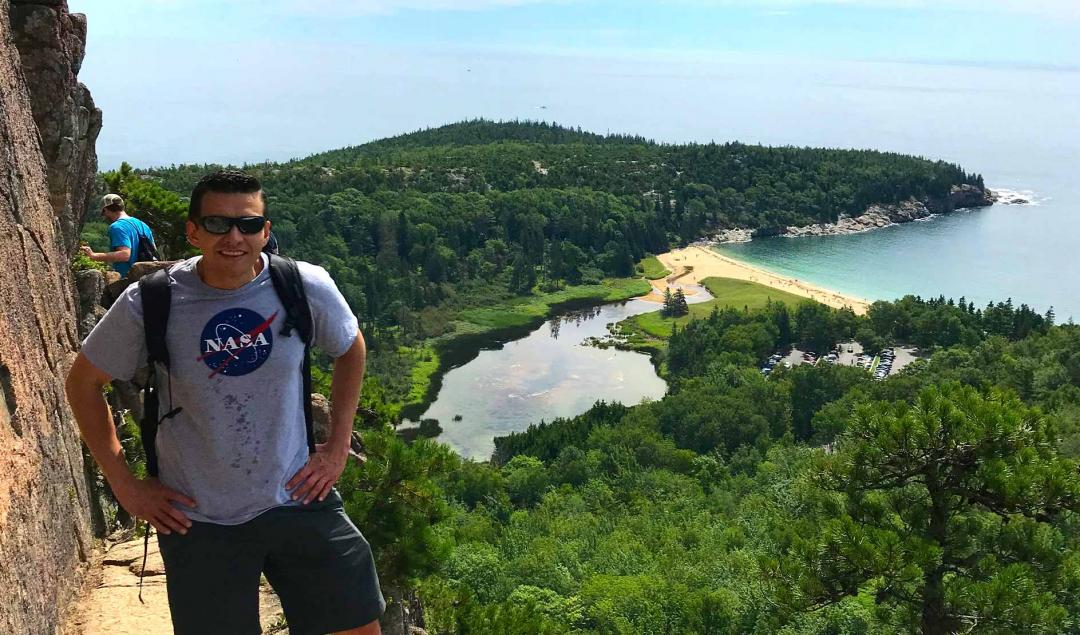 Cardenas enjoys spending time in nature and surfing when he's not leading research at UC Berkeley.

Opening new doors to the future

Cardenas insists that he would not be where he is today without the support of his mentors during the critical years he spent at OSU.

“When I was an undergraduate, I didn’t quite get research. I never really saw myself in a research or technical career, and they helped me gain exposure to this whole side of science.”

With their assistance, Cardenas slowly began to imagine future careers for himself outside the narrow scope he had initially felt limited to.

“I think this is really where being in higher education is so helpful. You can really find who you are, and find mentors that will help you navigate these decisions.”

“I think college is more than just the academic formation you get – it’s the personal growth and the people you meet. And just seeing the integration as an undergraduate where you take classes in the math department, or the toxicology department – seeing the different fields exposes you to so much. It really opened my eyes to possibilities I didn’t know existed.”

“I think college is more than just the academic formation you get – it’s the personal growth and the people you meet."

After completing his bachelor’s degree, Cardenas decided to remain at OSU to complete his Master of Public Health (MPH) in biostatistics, which, in 2012 was still part of the School of Biological Sciences. Despite his prevailing interest in epigenetics, he had begun to sense that he was missing the “human component.”

With his strong foundation in biochemistry, he had a unique skillset that helped him thrive and stand out, both in his MPH, and when he got his Ph.D. in environmental health three years later with Associate Professor Molly Kile.

One night, while pursuing his Ph.D. research abroad in Bangladesh, Cardenas saw a posting online about a postdoc position at Harvard, with a professor whose work in epigenetics was highly regarded. “I was thinking, ‘I’ll never get in, that’s not going to happen.’”

Thanks to his hard work and an “excellent recommendation” from his advisor, contrary to what he had believed, Cardenas was accepted for the position and began his postdoc research in September 2015.

A career that finds answers

Now, as an assistant professor at UC Berkeley, he gets to apply the principles of biochemistry that have always fascinated him, to the study of human and ecological science. Continuing work he began as a postdoc at Harvard, Cardenas considers the environmental impacts on the epigenomes of human populations.

“I’m really passionate about epigenetics, which is why my whole research program is built around epigenetic influences of health and disease. I just find it fascinating,” Cardenas said.

For the past five years, he has been working with population data collected from a human study that now includes around 1500 mother-child pairs. First started in the 1990s, when Cardenas was still in high school, scientists have collected around 18 years of data on their growth and development.

“I’m really passionate about epigenetics, which is why my whole research program is built around epigenetic influences of health and disease. I just find it fascinating."

“In epidemiology, we cannot have a nicely controlled experiment as you would with mice in a lab,” Cardenas explains. “We need to rely on large numbers to try and piece apart some of the signals from the noise.”

So far, the data he has collected has been game-changing: Only five years after completing his Ph.D., Cardenas has published more than 60 articles and has more than 800 citations. In 2019, he led a study on the link between common chemicals known as PFAs and diabetes, which was published in Diabetes Care and featured by the international news journal Reuters.

The study, which tested blood samples from 957 diabetes-free people, found that high levels of PFAs - commonly used in consumer goods for their water-repellent properties – could be associated with a higher risk of contracting diabetes in overweight or obese people. Exercise, they found, could mitigate these risks.

His current research, which has received five years of funding through the ONES grant, will use data science to determine the effects that prenatal and postnatal exposure to heavy metals can have on the neurodevelopment of children. While the neurotoxic effects of lead and mercury have been understood for decades, there is little research examining the impact that multiple prenatal exposures may have on cognitive development. In another project, he is investigating multiple environmental influences on biological aging, using highly accurate epigenetic clocks.

“Previously we thought that children exposed to high levels of pollution or toxicants were doomed, but now we’re seeing that this might not be the case.”

He believes that, given the rapid development and differentiation of brain cells at an early age, this is a critical window of development that may hold more significance than we yet realize. “Whatever happens during that period in utero and early-life might affect disease susceptibility throughout time,” he explains.

Using the same tools he learned from his undergraduate degree, Cardenas looks for epigenetic biomarkers in thousands of genes. Unlike genetic mutations, which are hereditary changes in the DNA, epigenetic modifications are changes that happen above the genotype and can be influenced by the environment. Ultimately, he wants to determine how environmental exposure might influence susceptibility to these modifications – and determine a way to reverse them.

While for many years, the prevailing knowledge was that epigenetic markers were permanent, new studies have shown that some are actually malleable. His project will address this gap by testing if certain nutrients, like methyl donors including methionine, folate, betaine and choline, could offset the harmful effects of toxic exposure.

“To me, it is pretty interesting that we might have the potential to intervene earlier in life,” Cardenas says. “Previously we thought that children exposed to high levels of pollution or toxicants were doomed, but now we’re seeing that this might not be the case.”