An Honor’s senior double majoring in biochemistry and psychology, Diego Rodriguez exemplifies the power of using perseverance and dedication to achieve one’s goals. An award-winning scholar and undergraduate researcher in biochemistry assistant professor Afua Nyarko’s lab, he credits her guidance in allowing him to realize his dreams. Last summer he was selected by the Broad Institute of MIT and Harvard for a highly competitive summer research program and will return this year for a two-year position advancing developments in drug therapy.

Growing up in Medford, Oregon, Rodriguez learned the value of hard work at an early age. “My dad never went to high school; my mom was a high school dropout. My parents probably work close to 200 hours a week,” says Rodriguez. Despite working punishing hours, his mother was eventually able to complete a bachelor’s degree. “We graduated a year apart, me from high school, and my mom with her bachelors,” said Rodriguez.

Overcoming obstacles has been a recurrent theme for Rodriguez, starting in infancy when he was born prematurely, and his parents were told by his doctors that he wouldn’t be able to run. An avid soccer fan, Rodriguez’s father gave him a soccer ball that he would keep with him day and night, igniting a passion for the sport that would continue until college. Overcoming his handicap, Rodriguez became a talented athlete, with offers to play in college.

“My summer internship was important for my future, but without OSU and OSU faculty supporting me, it may never have happened.”

Despite his parents’ own lack of formal education, they instilled in him a value system of diligence and a love of learning. “My dad was very focused on making sure that we were educated. In his mind, he wasn’t educated and that’s what held him back. My education was his way of ensuring I would have a life that he would want for me.”

In addition to working hard manual labor jobs to support the family, Rodriguez’s father builds custom cabinetry, which he learned and taught himself while he was working as a janitor for a construction firm. He gifted Diego his first book, an Audubon bird encyclopedia. A treasured possession, he soon became interested in the inner mechanisms of all life forms.

A stellar high school student, Rodriguez chose to come to OSU because of the research opportunities that were available at a price he could afford. “I wanted the opportunity to get experience in writing and conducting experiments that I wouldn’t be able to find in other places.”

“When I first came to OSU, I was majoring in microbiology and political science. I’ve always liked science, but I also like people and understanding how people work, so I’m very interested in the social sciences. But after freshman year, I started getting more into mechanisms and systems biology.”

“If I owe anyone for my success, present and future, it is Afua and Kari.”

Rodriguez is grateful for the mentorship and guidance provided by the Biochemistry and Biophysics Department, particularly Senior Advisor Kari van Zee, as well as Afua Nyarko, who he has worked with since his sophomore year at Oregon State.

“Without Kari, I may not have graduated. She sponsored me for scholarships, and helped me with my applications. She gave me advice, always helped me become confident, and found opportunities for me,” Rodriguez said. “If I owe anyone for my success, present and future, it is Afua and Kari.” 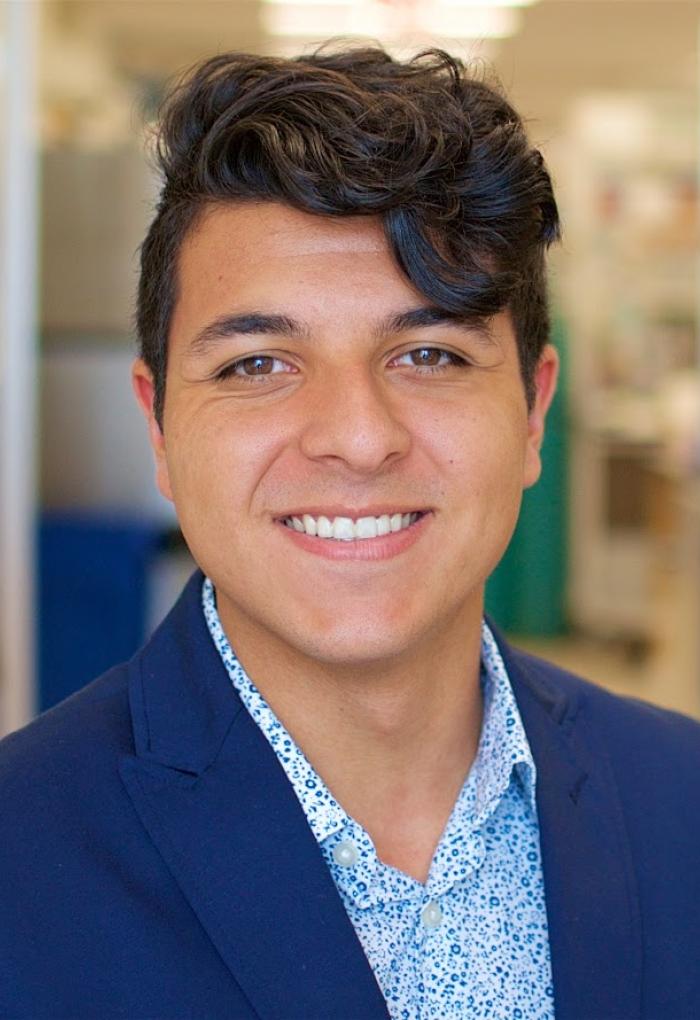 Diego Rodriguez has signed a job offer to return to the Broad Institute for a two-year offer in partnership with Pfizer Pharmaceuticals.

In Nyarko’s lab, Rodriguez works to understand protein binding interactions, which will help form a deeper understanding of the body’s shortcomings that lead to diseases such ascancer, Alzheimer’s, Huntington’s and muscular dystrophy.

Rodriguez has published multiple papers, and has his own project characterizing proteins using multiple techniques including X-ray crystallography, isothermal titration calorimetry, circular dichroism, fluorescence spectroscopy, and nuclear magnetic resonance spectroscopy. He has received numerous awards, including the Hendrix Award from the Honors College and the American Society for Biochemistry and Molecular Biology Undergraduate Award. He has also received the College of Science George and Martha Porter Pre-med Scholarship and the Merrill Family Foundation Scholarship.

“Afua is the reason I am a scientist today. Her mentorship, patience and time is what made everything else possible."

She’s helped me go to conferences, or helped me with applications to get funded, including the summer research program,” Rodriguez says.

A dedicated researcher, when he first received an invitation from the Broad Institute, he was uncertain if he should even bother applying and sacrifice a valuable summer of research.

“I was really motivated to stay in Corvallis over the summer and get some work done. I talked to Afua and she wanted me to do it, and so did my parents. It was the only summer program I ever applied to," he said.

"It wasn’t until I got there that I found out it had a less than one percent acceptance rate.”

The Broad Institute, located in Cambridge Massachusetts, is home to many prestigious research facilities, including one of the largest genome sequencing centers in the world. Launched in 2004, the Broad community includes more than three thousand scientists dedicated to bettering the quality of human life through genomics.

Rodriguez was matched with William Sellers, a core member of the Broad Institute with a dual appointment at the Harvard Medical School, and a Senior Advisor to the President of Dana Farber Cancer Institute. Previously, Sellers has served as the vice president and global head of oncology for the Novartis Institutes of BioMedical Research.

“The work I did was to understand how a novel protein that Sellers found in his genomics was causing the degradation of other proteins that cause cells to die in response to chemotherapy,” Rodriguez explained. “We found that this protein stops cancer cells from dying through degrading pro-apoptotic (prodeath) proteins.”

Working a minimum of 70 hours a week, Rodriguez made impressive research achievements that helped open new doors in therapeutic treatment. Starting this summer, Rodriguez has signed a job offer to pursue two years of post-bac research at the Broad Institute. He will continue to work with Sellers in a partnership with Pfizer Pharmaceuticals on their now collaborative project, developing screens and potential therapeutics.

Fascinated by cancer research, he intends to pursue an MD.–Ph.D. in the near future, hoping to follow a path toward becoming a surgeon.

Rodriguez stresses that above all, it is the dedication of his mentors that helped him recognize what he is truly capable of.

“My summer internship was important for my future, but without OSU and OSU faculty supporting me, it may never have happened.”