The College of Science is delighted to announce Elisar Barbar as the new head of the Department of Biochemistry and Biophysics effective January 1, 2020. Barbar brings deep research experience, a passion for student success and a conviction that science is not confined by international borders.

Barbar is currently professor of biochemistry and biophysics and faculty director of Oregon State’s NMR Facility that provides NMR spectroscopy resources to researchers on campus and beyond.

She joined the Department of Biophysics and Biochemistry in 2004 as an associate professor and was promoted to full professor in 2011. The highly productive Barbar Lab is renowned for global collaborations and the integration of interdisciplinary approaches in pursuing new knowledge.

“I am eager to lead this strong department,” said Barbar. “My vision is to move the department forward in pursuing impactful research, and facilitating and promoting accessible, innovative education and outreach. I look forward to working with extraordinary colleagues in developing new areas that address the needs of a changing world.”

Andy Karplus, current head of the department, announced in summer that he would step down from his post, which he has held since 2015. He also served as department chair from 2007-2011. The department and the College have been enriched by his effective leadership and are deeply grateful for his many contributions. He will now return to his teaching and research responsibilities, as well as serving part-time as associate department head.

She also has strengthened the university’s reputation as a center of excellence for biological NMR by leading the efforts to secure funding for the high-powered Nuclear Magnetic Resonance (NMR) instrument—the 800 MHz spectrometer is one of only 50 nationwide. Barbar acquired nearly $2M in grants for acquisition of the NMR.

College of Science Dean Roy Haggerty congratulated Barbar on her appointment and welcomed her to the College’s leadership team. 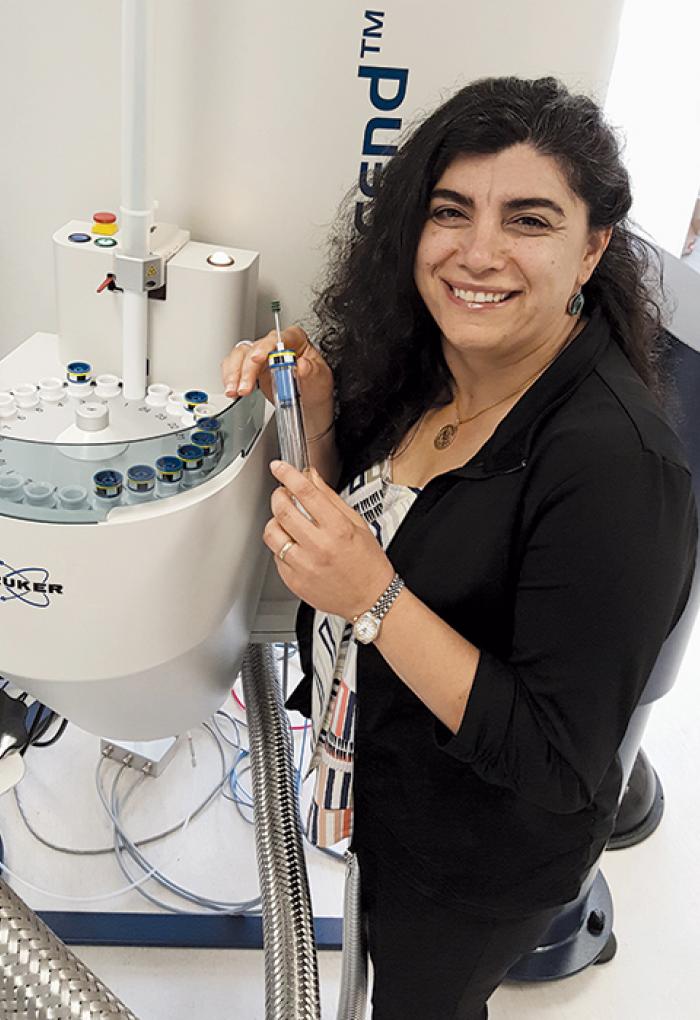 “I am grateful that Dr. Barbar has agreed to lead the Department of Biochemistry and Biophysics. I endorse her aims to foster innovative research and education that develops future leaders to solve national and global problems,” said Haggerty.

“She is committed to seeing the department intensify its efforts in excellence in teaching, research and outreach. She also aims to enhance diversity and student success within the department and across the university.”

Barbar’s desire to prepare the next generation of science leaders goes back to her roots in Beirut, Lebanon. Growing up in a family of school teachers, she developed an early love of learning and education that defied expectations of what was possible in a war-torn country.

She earned her bachelor’s degree in chemistry at the American University of Beirut, which was the highest certification possible in the country at the time. After teaching high school for few years, she pursued further education in the United States—completing her Ph.D. in chemistry at Portland State and her postdoctoral research in biophysics at the University of Minnesota.