Kendra Jackson is an Honors biochemistry and molecular biology senior with big dreams of a future in medicine and research. This year she was awarded the nation’s highest honor for sophomores and juniors in the fields of science, technology, engineering, and mathematics (STEM) – the Barry Goldwater Scholarship. She credits her enormous success to the support of science faculty, and particularly her mentor Michael Freitag, a professor in the Department of Biochemistry and Biophysics.

Jackson was recognized with the Goldwater Honorable Mention in 2018. She plans to complete an M.D.-Ph.D. after graduation.

“It’s been a competing love of medicine and research my whole life,” Jackson explains. “Ever since I remember, biology was my favorite subject in school – the transition to biochemistry and molecular biology was just the next logical step.”

But it isn’t just an interest in science that draws her to the field. Her commitment stems from a personal reason as well. 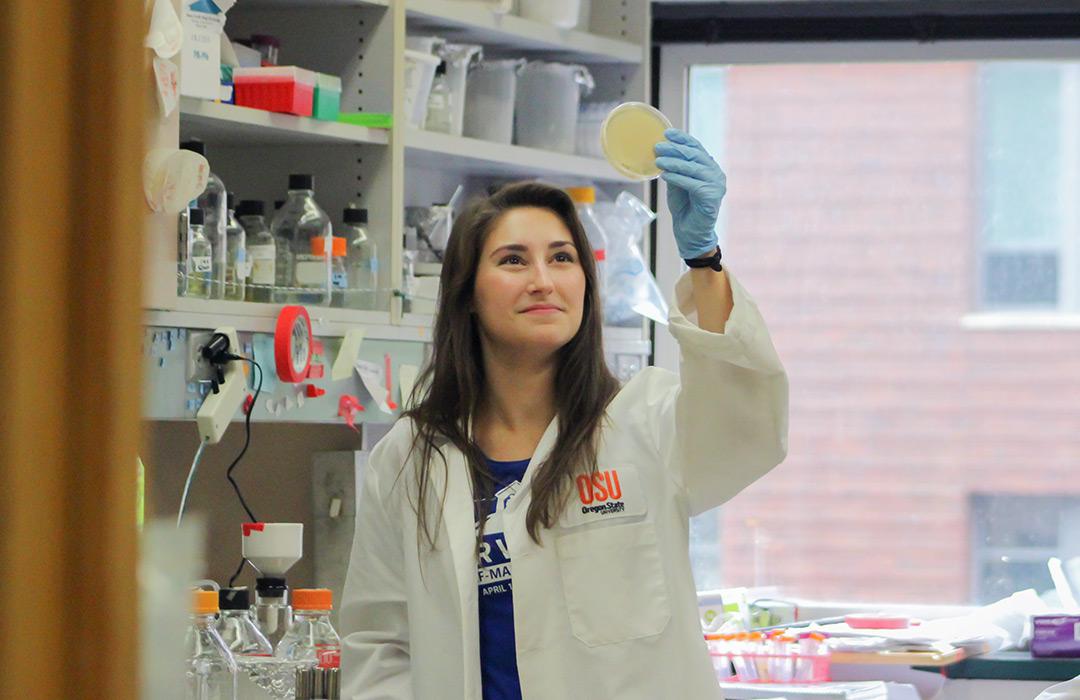 When Jackson was five years old, her younger sister was diagnosed with acute lymphoblastic leukemia. It was a painful and terrifying prognosis, which shaped Jackson’s earliest memories, and changed her perspective on medicine forever.

At an age where most children are still barely beginning to grasp the concept of life in the world, many of Jackson’s formative years were spent by her sister’s hospital bedside.

Although her parents both have jobs in the business sector, after her sister’s diagnosis they became rapidly involved in her medical care, frantic to understand the cause as well as the treatment plans that were available.

Always a curious child, Jackson wanted to understand everything that was happening as well.

“I always asked the doctors way too many questions,”

Jackson laughs. “It’s kind of funny to remember the doctors’ explanations to me then, knowing what I know now.”

The discovery of the targeted therapy drug Gleevec by Oregon Health and Science University (OHSU) scientist Brian Druker occurred at this time, which revolutionized treatment for chronic myeloid leukemia. As a frequent visitor to the Doernbecher Children’s Hospital at OHSU, Jackson was able to witness some of the first FDA-approved treatments with the new drug, and saw the incredible impact it had on other children that she had become friends with.

“It really drove home that it wasn’t just the physicians and the treatment that were helping my sister and other patients – it was the research that was behind all of it,” Jackson explains.

This discovery helped solidify her ultimate goal of being a physician scientist, which would allow her to perform research while also treating patients and observing the disease up close.

“I think it’s very unique that my situation turned out to have such a positive impact on my life,” explains Jackson. “My sister jokes now that she was the launchpad for my career.”

Originally from Lake Oswego, Oregon, Jackson was introduced to research in high school as an intern at OHSU. Although she was too young to have her own research project, it gave her a taste for working in a laboratory and a hunger for more.

“The big reason why I came to OSU, and why I really love it, is because of the research opportunities,” she explains.

Jackson first met Freitag early in her freshman year at a faculty mixer hosted by the Honors College, and grew interested in his research on epigenetic silencing.

That winter, she applied for URSA Engage, an OSU program intended to establish mentoring relationships for first- and second-year students. Jackson was dismayed to hear that she had not been accepted into the program. Fortunately, Freitag was able to see her potential, and made space to accommodate her in his lab for her Honor’s thesis project.

“The big reason that I came to OSU, and why I really love it, is because of the research opportunities,” she explains.

Now, it feels good to have her scientific abilities recognized on a national level. 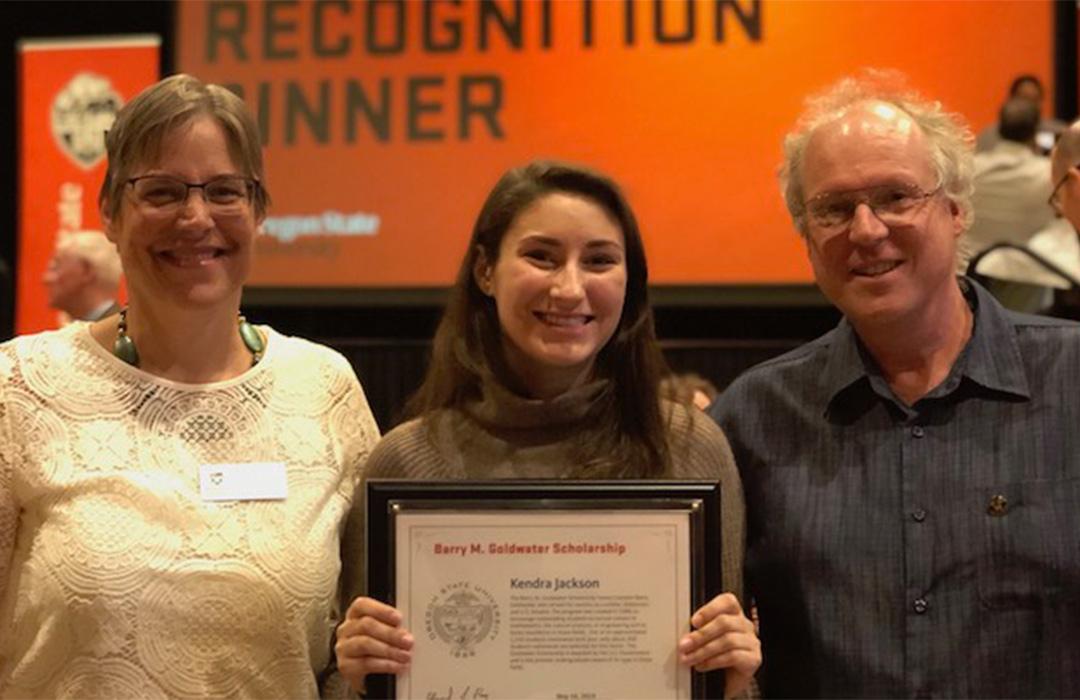 “It shows that I have improved – it wasn’t just a fluke,” she said. “I think a lot of people struggle at this stage with ‘imposter syndrome.’ Goldwater certainly helps give me confidence in the research I’m doing, and helps me to push forward in my career.”

Epigenetics is a rapidly growing field that focuses on heritable changes in gene expression that occur as a result of environmental or lifestyle circumstances. Epigenetics holds the answers to many questions we are only beginning to answer, such as variations in how we age, as well as the factors that influence susceptibility to deadly diseases like cancer.

Our bodies naturally have a mechanism that regulates tumor growth and cell multiplication, but studies have found that certain factors can cause epigenetic changes that can silence normal responses to environmental challenges. This process, known as epigenetic silencing, has been shown to exacerbate tumor growth and allow cancer to spread unchecked.

Jackson’s project focuses on a protein complex known as PRC2, which primarily functions to ensure proper growth and development. Mutations can deactivate PRC2 and cause a loss of its regulatory function, which can cause abnormal physiology including the development of cancer.

After nearly three years of working in the Freitag Lab, she has seen her work published in a journal, and has had the opportunity to be a teaching assistant in a lab course. She is also a two-year recipient of the biochemistry department’s Cripps Undergraduate Research Experience Fellowship, the SURE Science Award and the NSF Research Experience for Undergraduates award. The latter will enable her to attend the largest international conference on fungal genetics this spring.

In addition to her research, Jackson shadows an orthopedic surgeon at OHSU to gain valuable patient-interaction experience and become acclimated to the medical community. She also travelled to Honduras with the Global Brigades last summer, which is an international nonprofit organization that partners with local doctors to help set up and run free health clinics in impoverished communities. This summer she travelled to Panama with the organization, where she continued to broaden her cultural as well as clinical experiences.

In the spare time she can find, she enjoys running and being in the great outdoors. After doing track and cross country in high school, she continues seeking out distance-running events. In addition to running multiple half-marathons, she also competes annually in the Hood to Coast Relays – running a total of 77 miles split between six teammates. She also enjoys hiking and backpacking, and is recently starting to get into mountaineering after taking some classes from the Adventure Leadership Institute.

Soon, Jackson hopes to apply the knowledge she has gained during her time at OSU to a broader spectrum of medicine and research. After she graduates next year, she plans to take a gap year doing research at a prestigious biomedical research institute, such as the Mayo Clinic. She hopes the experience will make her a more competitive applicant for the M.D. Ph.D. programs she will apply for.

“I feel like I’ve been met with nothing but acceptance at OSU, and I’m hoping the encouragement and support I’ve gotten so far will help me as I get to higher levels as well,” says Jackson.