Corals and the microbes they host evolved together, new research by microbiologist Rebecca Vega Thurber and her research team shows. The findings, published in Nature Communications, add fresh insight to the fight to save the Earth’s embattled coral reefs, the planet’s largest and most significant structures of biological origin.

Funded by the National Science Foundation, the study involved hundreds of samples of scleractinian corals – also known as stony corals – which since their first appearance 425 million years ago have branched into more than 1,500 species.

Many of those are major builders of coral reefs, which are found in less than 1 percent of the ocean but are home to nearly one-quarter of all known marine species. Reefs also help regulate the sea’s carbon dioxide levels and are a crucial hunting ground that scientists use in the search for new medicines.

“Many corals have gone extinct during industrialization and many others are threatened with extinction,” said study co-author Vega Thurber, who is featured in the 2018 Oregon State University-produced documentary “Saving Atlantis.” “If we see patterns of evolution between microbiomes and corals, that gives us an idea of which microbes to target – to learn what they do, how they help corals resist climate change, and how they help to buffer against nutrient pollution. We can look in more depth at the microbes and understand how they help or hurt their hosts.”

Modern corals are home to a complex composition of dinoflagellates, fungi, bacteria and archaea that together make up the coral microbiome. Shifts in microbiome composition are connected to changes in coral health.

“Likely the ancestral corals also harbored complex microbial communities but there’s a lot we don’t know about how these coral-microbe symbioses evolved or the key factors influencing microbial communities in modern corals,” Vega Thurber said. “Certain species of corals have distinct microbiomes, to the point where that occurred at some point in their evolutionary history. Not 400 million years ago, but there are specific groups of microbes that do show very strong evidence of evolving with their hosts more recently.”

Vega Thurber and Ryan McMinds, a Ph.D. student in her lab and co-first author of the paper, were part of an international collaboration that also included Penn State University’s Monica Medina and former Oregon State post-doctoral scholar Jesse Zaneveld, now an assistant professor at the University of Washington-Bothell. 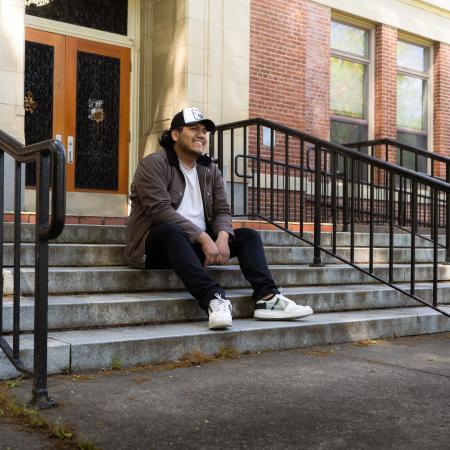