“There are Bailey’s Beads!” yelled Randall Milstein, the Oregon NASA Space Grant Astronomer-in-Residence at Oregon State, over his shoulder to the eclipse-gazing crowds at Peavey Field on August 21, as brilliant beads of sunlight sparkled along the rugged edge of the Moon’s shadow in the seconds before totality. “And look! See Venus? See Mars?”

Just as Milstein foretold to the standing-room-only LaSells Stewart Center crowds in the days leading up to the total solar eclipse during the OSU150 Space Grant Festival, the planets Venus and Mars, too close to the Sun’s blazing light to be viewed normally from morning on Earth, were easily spotted in the eerie eclipse twilight.

All of Milstein’s other eclipse predictions came true too. Diurnal birds flew home to their roosts. Some witnessed bats streaking overhead. The temperature dropped, and the eclipse wind swept over the crowd. The latter was a scientific mystery solved only recently in 2016 when meteorologists at the University of Reading demonstrated, thanks to the data from 4,500 citizen scientists, that it is caused by the cooler air rising from the ground and causing a drop in wind speed and direction. 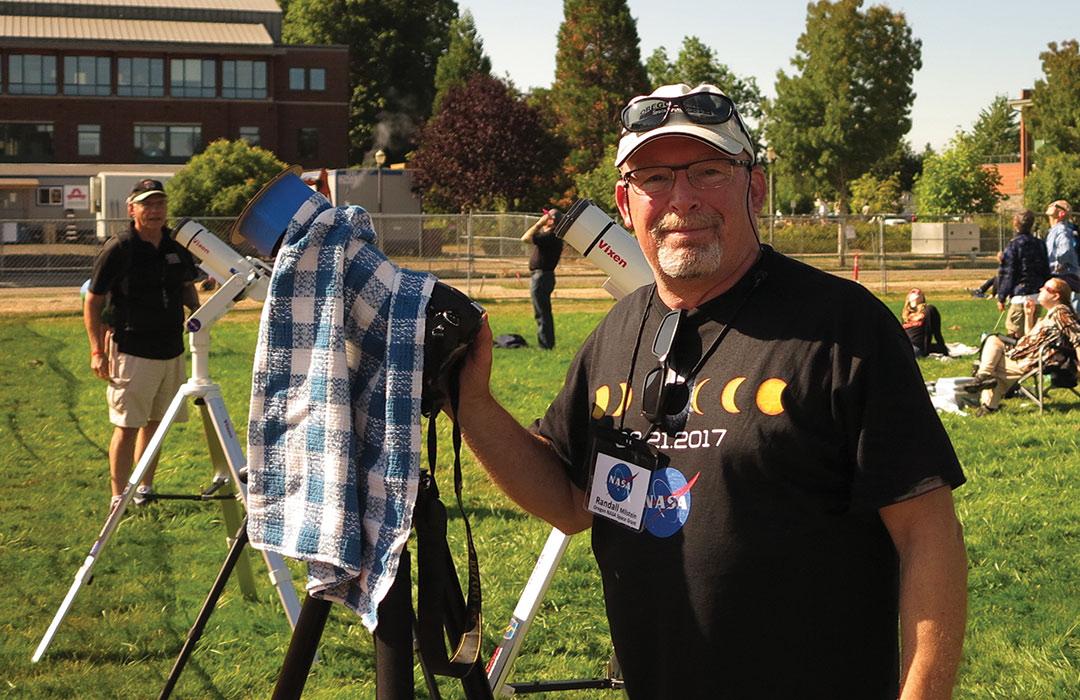 Randall Milstein getting ready for the eclipse.

The fulfillment of the crowd’s well-informed expectations was a stellar moment for the validity of astronomy — and science itself — especially in a world of fake news and easy skepticism. It was also a triumphant moment for Milstein and OSU. The 18 months of careful planning, dedicated resources and dozens of staff and volunteers resulted in a smoothly run event, from distributing thousands of eclipse glasses to installing temporary fencing and bathrooms, making sure all lights and sprinklers were turned off during the eclipse, and installing power to computers and radar dishes on building tops set up to receive data from high-altitude research balloons.

The planning paid off handsomely, as festival attendees enjoyed clear skies and the total solar eclipse experience of their dreams. Milstein and Oregon State received dozens of grateful letters and emails after the event, including one from James E. Hesser, Emeritus Director of the Dominion Astrophysical Observatory with National Research Council Canada, who, having seen a total eclipse in Quebec in 1963, knew it was an “experience of a lifetime” well worth bringing his family to Corvallis all the way from Canada. Hesser wrote afterwards to President Ray:

“My wife and I enjoyed presentations by Gabriel Jaime Gómez Carder and Columbian delegates (in Spanish), Robert Thompson, Martin Fisk and Randall Milstein. Our daughters enjoyed some of the foregoing, as well as the presentation by Davide Lazzati… The art inspired by the Space Grant Festival was a much-appreciated touch...

"How OSU could have created better science outreach experience for the public is beyond us. We feel fortunate to have learned of the opportunity to view the eclipse from OSU and extend our thanks to everyone for their contributions to our truly wonderful experience.”

The appreciation went both ways, too.

Even though science can predict certain astronomical phenomena with great accuracy, human behavior is another matter entirely. Milstein warned the crowds that no one could predict how they would react to the total eclipse. A person might start laughing, or crying, or fall to the ground in abject wonder, or as Milstein explained it:

“A total solar eclipse is arguably the most spectacular of all natural phenomena and the only one which is completely silent and non-violent. It is a spiritual experience.”

And if individual behavior was a wildcard, who knew what an eclipse crowd of anywhere up to the predicted 400,000 might do to a usually calm and serene Corvallis campus? But the crowds in Corvallis and at OSU were much smaller than predicted.

“People were amazing, so respectful and gracious. It was not a mob. Nothing was broken and people picked up after themselves,” reflects Milstein.

There were, of course, a few glitches. One of the high-altitude balloons broke free pre-launch from Peavey Field, but quick reactions and teamwork from other launch teams had the payload lifting-off within 20 minutes.

And Milstein had his own unpredictable moment during the eclipse. Despite hours of preparation, he forgot to change a basic setting on his camera, spoiling many of his eclipse photos. Happily, his lapse, while personally disappointing, was not consequential. Thanks to the dozens of professional and amateur photographers—many trained by Milstein at OSU Solar Filter Construction workshops--there are many amazing photos of the eclipse from Corvallis.

Camera snafus aside, the overall arc of Milstein’s eclipse outreach in the days, weeks and months leading up to the eclipse was nothing short of heroic. He was interviewed on six radio shows, nine television shows, five podcasts and 14 newspapers and magazines. He led 22 outreach events reaching more than 6,000 people across the state.

Thanks to Milstein’s outreach and that of many other scientists, astronomers, vocational stargazers and enthusiastic volunteers behind the scenes at the OSU150 Space Grant Festival, the crowds watching the total solar eclipse in Corvallis were both safe — outfitted with free ISO-approved eclipse glasses — and well informed.

Everyone who made the effort to come to Corvallis knew total solar eclipses are rare — the 2017 eclipse was the first to travel coast-to-coast across North America in nearly a century. But few may have been aware until Milstein’s lectures that the exact disc-to-disc match of our Sun and our Moon during a total eclipse is thanks to a “cosmic coincidence,” the fact the diameter of the Sun is 400 times larger than that of the Moon, while the distance between the Earth and Moon is 400 times the distance from the Moon to the Sun.

Milstein explained that since our Moon is very gradually moving away from Earth at about 3.8 cm a year, we live in a unique window of time on Earth during which a total eclipse can be seen at all. Granted, on a human time scale, it’s a very wide window, he points out, one that won’t close for another 600 million years or so. Still, on a cosmic scale, 600 million years is a tiny fraction of time, less than one-tenth of one percent (.0001%) of Earth’s 4.5 billion year history.

Astronomy and the physics of space can often make us feel miniscule in the vast scale of space and time. But for the one minute and 40 seconds of the total solar eclipse here in Corvallis, science only deepened the collective awe, putting us center stage at an amazing moment in time.