When zoology major and California native Karianna Crowder was a child, she took a common game of pretend a little farther than most.

“I believed I was a cat,” she said. “It wasn’t just pretend to me. I licked my parents’ cheeks instead of giving them a kiss. I meowed instead of talking. I insisted my parents put my food on the floor,” she laughed. “When people ask me why I want to be a vet, I trace it back to my childhood obsession.” 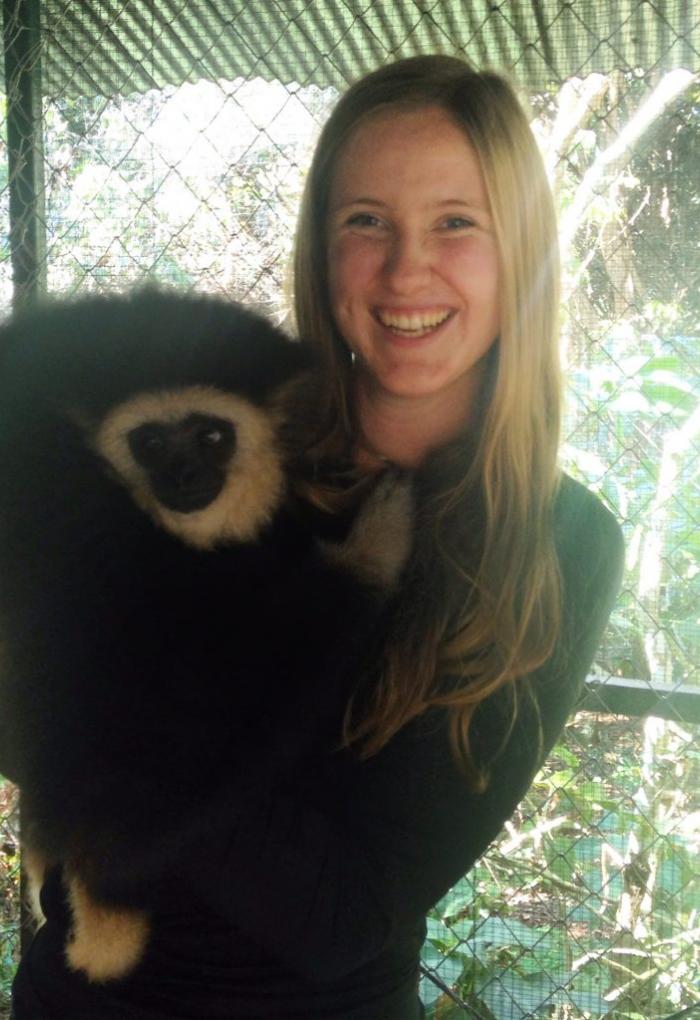 Karianna in Thailand holding a white-cheeked gibbon, the subject of her honors thesis.

Flash-forward 15 years later, you'll find that Karianna still loves animals and still throws herself passionately into whatever she does. And at Oregon State, she’s done a lot.

In pursuing her dream to be a veterinarian, Karianna has job-shadowed throughout her four years at OSU in the Small and Large Animal Teaching Hospital. She has observed many procedures, CAT scans, and multiple surgeries—including a C-section on a sow and a biopsy on a mini greyhound. She even watched an animal flat-line and be resuscitated by CPR.

Karianna has also done a lot of animal-related volunteering. She spent many weekends donating her time to Chintimini Wildlife Center, cleaning and feeding injured wild animals, and also at OSU’s Sheep Center, where she mastered the art of “lambing,” i.e. pulling a lamb out of a pregnant ewe, and practicing the classic “snip and dip” procedure with the newborn’s umbilical cord.

In her junior year, Karianna took full advantage of her study abroad opportunity and traveled to Thailand for three months to work in a primate sanctuary. Her experiences there provided her with a new worldview and became the inspiration for her undergraduate thesis.

“When I first landed in Singapore, the city was covered in thick smog from the burning of nearby rainforests,” she said. “People were getting sick and wearing masks. It made environmental disaster very real for me. There is still a lot of work to be done.”

At the sanctuary, Karianna found many displaced primates, macaques and gibbons, who had lost their native habitat due to human-caused rainforest destruction. Her work centered on the nine white-cheeked gibbons at the sanctuary and involved studying and videotaping the gibbons’ social gestures, collecting data which forms the basis of her honors thesis. She was delighted by how “human” the primates were and formed relationships with them that reminded her “of those I’ve had with kids I’ve babysat.”

While in Thailand, Karianna also noticed multitudes of stray dogs and cats on the streets, animals who usually had hard, short life spans due to hunger, injury, disease and lack of birth control. Partly because she wanted to help street animals like these, once Karianna was back on campus, she persistently petitioned OSU’s College of Veterinary Medicine to let her come along on its annual trip to Nicaragua, where veterinary students run a free pet clinic for a week. Thanks to her hands-on experiences as a volunteer at OSU’s animal hospitals and clinics and her summer job as a vet tech, Karianna was the first undergraduate student to be allowed to come along.

“It was a fantastic experience,” she said. “In six days, we treated 767 dogs, cats, pigs, cattle, and horses. I was given the freedom to do the physical exams myself, listening to heart and lung sounds and palpating lymph nodes. I successfully took a fine needle aspirate of an abnormal mass on a dog and diagnosed a mast cell tumor with the help of a veterinarian. I then followed the dog to surgery, placed his catheter, medicated, intubated, and monitored him throughout the mass removal surgery. I even got to perform an equine dental, grinding down the horse’s teeth with a power float [a power drill affixed with a dental tool].”

Karianna glows when she reflects back on her four years at Oregon State.

“I grew up in Santa Cruz, California, where the weather is basically the same all year round. But in Corvallis—there are seasons! They are so beautiful. I never grew tired of watching the seasons change.”

Karianna chose OSU because she liked the idea of being part of a smaller community, the Honors College, within the context of a large university. She was also drawn to the "unbeatable" research opportunities offered to undergraduates. Even so, she was still surprised at how easy it was to get involved at Oregon State. “At such a big university, I wasn’t sure I’d be more than just another face on campus. But here I’ve gotten involved in so much, including leadership roles. Professors know my name!” 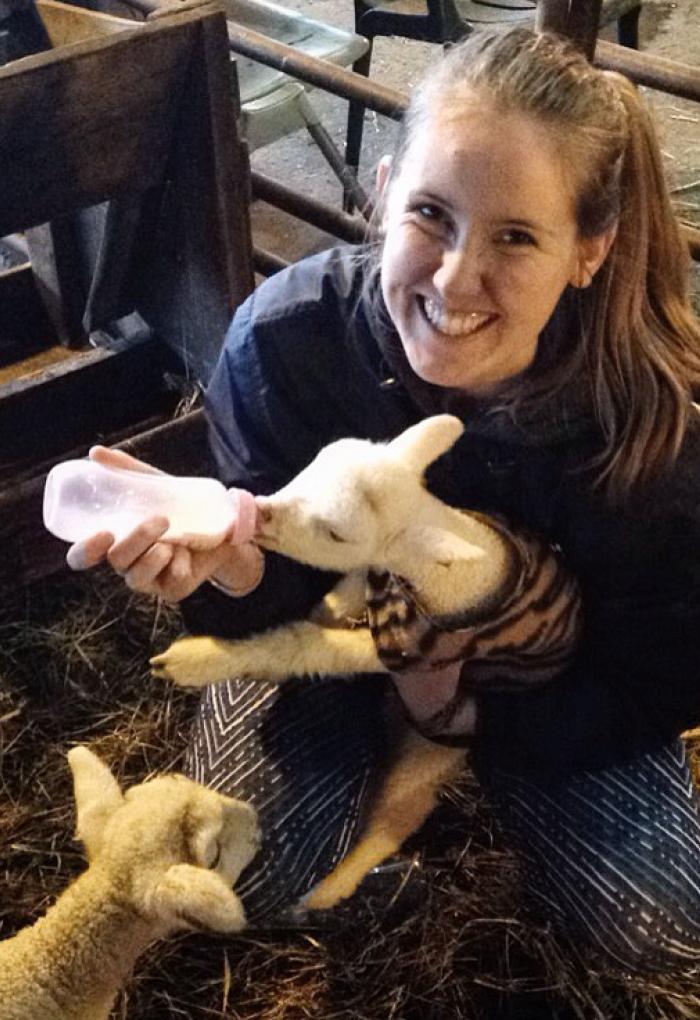 Karianna with a couple baby lambs

Karianna reflects on her experience as an Honors College science student, which offered her a strong sense of community right from the start. It was where she met many of her good friends - in the Honors College residence hall freshman year. As a member of the Honors College's Pre-Veterinary Scholars Program, Karianna was paired with mentor Karyn Bird, who helped get her a job in the bacteriology section of OSU’s Veterinary Diagnostics Laboratory. For three years, Karianna handled many specimens, streaking plates, testing for antibiotic resistance and processing countless fecal, urine and blood tests. “It gave me a great perspective on what really goes on when a clinic sends off’ samples – now I know how the testing is done.”

In addition to all of these hands-on experiences, Karianna has also held leadership roles as an Honors College Activities and Trip Coordinator, co-President of the Pre-Vet Scholars Club and President of the student Integrative Biology Club. She has volunteered even more off campus at the Boys and Girls Club of Corvallis, as a kindergarten basketball coach, and as a Tim Tebow special needs prom “buddy.”

Headed to Cornell University College of Veterinary Medicine in August to pursue a Doctorate of Veterinary Medicine, Karianna will continue to pursue her dream of being a small animal veterinarian. She embraces the future with her trademark optimism and enthusiasm, and enough hands-on experience to practically start her own clinic right now. May there be many fuzzy feet and wet noses in her future.