Some of the most interesting lives don’t move forward in a straight line. Mathematician Juan M. Restrepo thought he would spend his life as a professional musician, for example, until he stepped into an advanced math class and never looked back. Recently, he shared reflections on his life and work, including why a diverse, interdisciplinary approach is critical to his research.

There are three ways to do science: theoretically, experimentally (this includes observation/field work) and computationally. Most scientific results now combine all three modalities. The award I received acknowledges the impact I’ve had in applied mathematics, specifically in developing new computational tools that make it feasible to pursue geoscience problems that were not amenable to existing computational tools. These tools allow us to tackle new and challenging questions in the field.

What are some of those new and challenging questions?

How to model and make predictions about massively complex systems like Earth’s climate or financial markets. Typically, in these systems, knowing something about each element in isolation is extremely helpful but doesn’t automatically lead to an understanding of the system as a whole. Complex systems have many degrees of freedom (as well as variables that cannot be precisely pinned down). So we are seeking ways to eke out a low dimensional representation of the system that either explains the basic mechanism behind the complex behavior, and/or enables us to capture the complexity with a smaller (usually finite-dimensional) number of degrees of freedom--all the while taking into account the consequences of uncertainties in the physics and its parameters.

I have also proposed new quantitative tools and techniques for improved forecasting, particularly in highly unstable systems like the weather and extreme or rare events like droughts and deluges. I have worked on statistical representations of high dimensional systems that then yield more manageable proxies of the full system. I have worked on tools that try to help us look into the near future and answer questions like “How warm is it getting?” or “What are the trends in today’s financial data?”

What makes this work so difficult?

For one, we don’t have a full understanding of a lot of things in isolation, let alone as interacting elements in larger systems. The types of problems I focus on have lots of small things that interact with each other and these, in turn, interact as groups in different ways.

To illustrate, I’ll use a problem that my student Dallas Foster, my collaborator Matthew Sottile and I are working on. The problem relates to how a collective group of ants react to certain environmental conditions. In a colony of tens of thousands of ants, the behavior of each ant requires a huge number of degrees of freedom to describe. One might think that understanding everything about each individual ant and understanding how each individual ant interacts would lead to answers on how a large collection of ants respond to their environment (never mind the fact that each individual ant would demand a whole library-worth of information). The traditional thing to do is to formulate a model for the large-scale behavior and forgo the small scale. But it turns out that there is only a very tiny number of problems for which one can generate a model of the group while ignoring small-scale interactions or individual agents. The collective ant case is representative of a myriad of problems where small scales cannot be ignored.

But it turns out that there is only a very tiny number of problems for which one can generate a model of the group while ignoring small-scale interactions or individual agents. The collective ant case is representative of a myriad of problems where small scales cannot be ignored.

You are so interdisciplinary – with multiple appointments across colleges in the Departments of Statistics, Electrical Engineering, Computer Science and Physical Oceanography. Is an interdisciplinary approach necessary to the questions you study?

A salient characteristic of my research output is that I tightly combine physics, mathematics, computation and data in the tools I develop. Hence, for me interdisciplinary exploration is necessary. A word of caution is in order, however. Although academia now considers interdisciplinary research a good thing, in practice, this modality of investigation is not suited for everyone. It can be career suicide for some, in fact.

Why? What are the dangers?

If you don’t achieve expertise in any particular subject, it can lead to not getting tenure, not getting grants, and not being perceived as “scholarly” enough. In academia, you are rewarded for developing mastery and this should be unique: this is what we call expertise. And without expertise, you risk not being consequential. Most commonly, without enough depth in a core discipline, you risk discovering something that's already known, or, worse yet, rediscovering something and doing a worse job at it.

So I advise my students to be aware of what their strengths are, what they’d like to work on, and then think strategically about how to get there. Some are more comfortable being specialists, and that’s fine. Applied mathematics, applied statistics and applied computer science are good homes for people with diverse interests, as they grapple with a variety of archetypical computational problems which are common to many engineering and science applications.

Interdisciplinary work makes perfect sense to me. But being interdisciplinary should not be considered synonymous with being diverse. The desire has never been stronger than it is today to tackle problems that cross disciplines and so there is a demand for people who have the ability and background to work across disciplines. But diversity in science has always been critical: we need diverse but expert ways to tackle problems, diverse but state-of-the-art techniques, etc. Diversity means working across disciplines, but it also means tackling problems with different specialized tools.

How did you personally arrive at having so many disciplinary strengths?

How I arrived at having so many interests is a colorful story. Believe it or not, I used to be a professional musician. Tired of the long hours, bad conditions and low pay, I went back to school to take a break from work. Having concentrated on music and philosophy as an undergraduate, I thought it would be fun to do something completely different and chose engineering. I had nothing to lose since this was just a break and I planned to return to music anyway. My first mathematics class, in partial differential equations, was a turning point.

What happened? Did the professor recognize you in some way?

The professor was Michael Tabor at Columbia University. He often says I was his “best music student.” [Laughs] I wasn’t all that bad; I got an A-. Professor Tabor, who oddly enough later became my boss when I was faculty at the University of Arizona, strongly suggested I consider a career in applied math. He also loves music and I spent a fair bit of time in his office discussing science and music. My intention was to return to music after my foray in engineering, but I did not return to music. From engineering I eventually switched to physics and mathematics. I had more questions of the “how” and “why” variety than of the “what for.”

That’s quite a switch. As a physics major, how did you then become interested in computational geoscience as a field?

Geosciences appealed to me because in many of its challenging problems one is faced with the interplay of diverse physics across vast scales of space and time. A love of the outdoors probably plays a factor, too—I spend a lot of time in adventure traveling, skiing, climbing, trekking and biking.

Your work has focused substantially on oceans.

Specifically, I’m fascinated with the role played by oceans on the transport of heat around the globe, and the destabilizing role played by perturbations of the thermally- and salt-driven circulation we presently enjoy. I’m also interested in the role ocean transport plays in the movement of greenhouse gases and the maintenance of ice snow caps and their reflectance of the Sun’s radiation.

I am also fascinated by waves. The focus of my Ph.D. research was in a rather special wave called a soliton. It has wonderful/rich underlying mathematical structure. Incidentally, there are folks here at Oregon State who are world experts in solitary waves, the family of waves in which solitons belongs. I’m also exploring the role that waves play in Earth’s climate and the interaction between ocean waves and currents. I’ve developed models for how specific types of sandbars form and used supercomputers to characterize the fundamental forces on sand particles as they are forced by shearing and wavy ocean flows.

Presently I am developing a model for ocean oil spills. 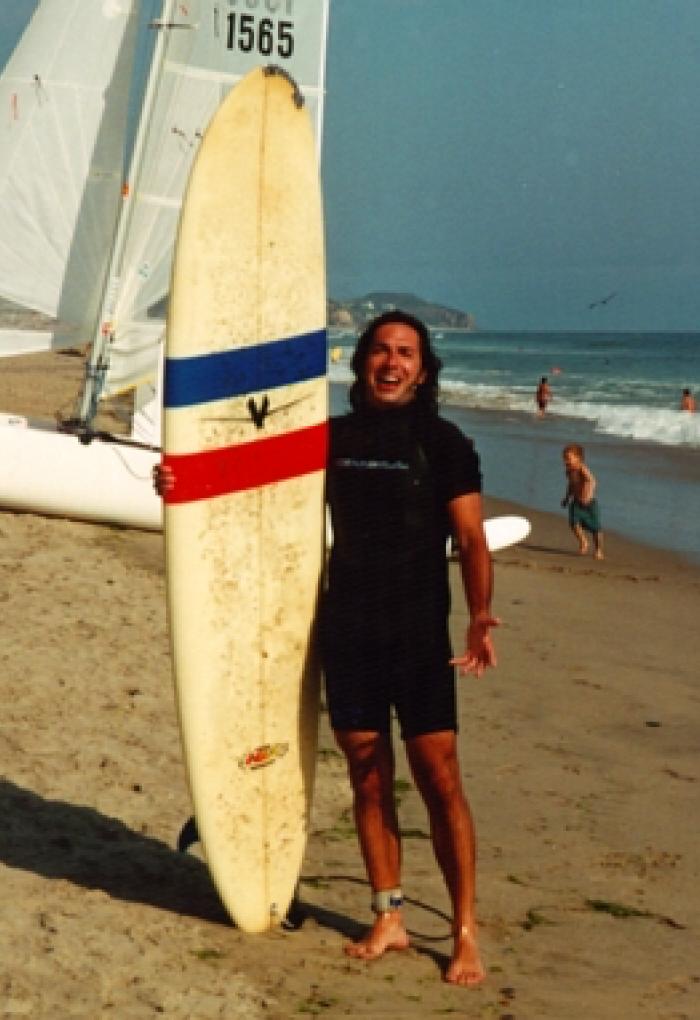 Restrepo in his surfing days

Speaking of waves, you used to be a surfer. Does that experience have anything to do with your interests now as a scientist?

When I was a postdoc in Chicago I crewed for several sailing teams. When I was at UCLA I decided to learn to surf. The first board I borrowed came back decorated with duct tape. I was terrible, but usually the first in, the last one out. The good surfers tolerated me, perhaps because they thought I made for good shark food.

But I was a good source of information: I tracked swells, tides and wind, and predicted the best time to get to the beach; I had a good idea of when waves were worth riding and understood how wind affected waves. Several of my nearshore scientific studies were inspired by these experiences: for example, my interest in how waves transport sand, pollutants and swimmers. One of my recent results explains why flotsam and jetsam parks itself outside of the break zone, a finding relevant to tracking pollution in the nearshore, also known as "sticky waters."

You are a strong advocate for diversity in science. Where does that passion/commitment come from?

Innovation is the most significant competitive, technological, cultural and economic asset this country has had. It may be argued that it is in peril presently.

Science thrives on innovation, and innovation is strongly correlated with diversity. Diversity is essential in collective adaptation, and thus essential to evolutionary biology. For similar reasons, it is also essential to science.

There are more practical reasons for encouraging diversity: for example, with regard to gender, it is patently stupid to ignore 50 percent of the potential workforce. Diversity leads to collective work adaptation. It also leads to a culture of learning and of listening.

Diversity makes organic sense to me: my background and my life history is a story of diversity. I grew up in a multi-ethnic neighborhood in big cities, in a family of artists who hailed from three continents. Diversity is essential to my work: I tend to work with people who contribute specialized skills and appreciate my creativity and ability to draw ideas from diverse disciplines.

What are your hopes for the future of computational geosciences as a method/field/set of inquiries and what are you working on now?

I am working with a team of statisticians, engineers, and social scientists to formulate adaptive response strategies to disasters. As usual, I am taking a "diverse" approach: in addition to instrumental data, we want to incorporate citizen cell phone reports to produce quantitative data that allows us to tell what's happening as the disaster is taking place in real time.

We need anthropologists to exploit social media and to interpret citizen data. We are using ideas of statistical physics to formulate cluster dynamics of populations responding to disasters. We are combining statistically physical models and data to develop fast algorithms that allow us to forecast and test options for future responses based on past disasters.

OSU is a perfect research environment for this project: it is supportive of diversity, and it builds upon many of our research strengths. It’s also locally relevant, given that we live in the Cascadia Zone, and globally significant because what we learn here will impact on disaster response elsewhere.