Entomologist George Poinar, Jr., together with his wife, Roberta, inspired the original science behind the book and movie Jurassic Park when they published a paper in Science showing that chromatin-like material in nuclei of a 40-million-year-old fly in Baltic amber was still recognizable. The paper provided author Michael Crichton with a plausible scientific basis for the fiction of obtaining dinosaur DNA from mosquitoes preserved in 100-million-year-old amber.

Over a long and storied career, Poinar has made some extraordinary discoveries. 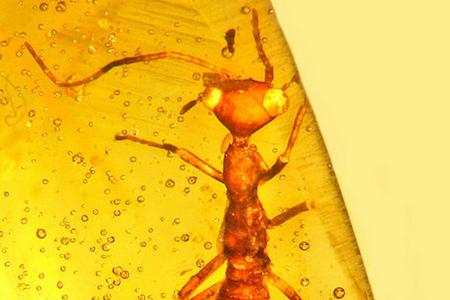 In 2006, he discovered the oldest bee ever known, a 100-million-year-old specimen preserved in amber that called for the classification of a new hybrid wasp-bee family, Melittosphecidae, supporting the theory that bees evolved from meat-eating wasps. In 2014 he unveiled an ancient flower which might have been pollinated by such a bee, providing the oldest evidence of sexual reproduction in a flowering plant – a Cretaceous-period angiosperm replete with pollen tubes and pollen-dusted stigma, the same mechanisms used by flowers to reproduce today. And in 2017, he discovered a bizarre and alien-looking insect with bulging eyes and a 180-degree-swiveling triangular head, features so unusual that the bug required the creation of a new order of insects.

Many of Poinar’s discoveries were launched here at Oregon State University, home to Poinar, who is a Courtesy Professor in the Department of Integrative Biology, and his wife and co-author Roberta since 1995. Recently, he offered us some “amber” reflections on his extensive career and life to date:

What brought you to OSU?

There were several reasons. My wife Roberta and I wanted to get away from the congestion in the Bay Area, and Corvallis seemed the ideal college town, like the one I grew up in in Berea, Ohio (home to Baldwin-Wallace College). There were also some scientists up here I wanted to work with regarding amber fossils. One of these was paleobiologist Art Boucot. We eventually wrote a book together titled Fossil Behavior Compendium.

I also wanted to work on amber flowers with Ken Chambers in Botany (College of Agricultural Sciences). Since then we have published a number of papers on flowers from Dominican, Mexican, Baltic and Burmese amber. I also wanted to finish my book on life in the Pacific sand dunes. I had studied the dunes in California and needed to study the northern ones in Oregon and Washington. So Roberta and I purchased a little dune house in Waldport where I set up a laboratory and every weekend went over there or to other Oregon and Washington beaches to study the plant and insect life. The final book, entitled A Naturalist’s Guide to the Hidden World of Pacific Northwest Dunes, was published last year by Oregon State University Press.

How have you been involved over the years with the university?

Ever since 1995, when I arrived and was offered a position as Courtesy Professor, I have conducted all of my research at OSU and given several lectures in Paleontology and Entomology over the years. Also, I donated several ancient fossilized gum and amber specimens from New Zealand, along with cones and leaves of the rare Kauri tree (Agathis sp.)(Araucariaceae) to the Botany Department.

As a paleobiologist, you’ve examined the remains of many extinct species. Where are we headed now as a planet/life form in terms of extinction?

Extinction is bound to come to all species in one way or another. There are many reasons why species become extinct and today humans are but another cause of extinctions, aside from those caused by natural events (volcanism, comets, earthquakes, diseases, etc.). Our goal, as humans, is to live peaceful, healthy, productive lives as long as we can. There is much we can do to mitigate our worst effects.

How has your work influenced how you think about your life today?

I was very fortunate to have a mother interested in nature and teachers and professors who encouraged my interests in biology. Serendipity has also played a large part in my life. It involves having the nerve to jump at opportunities that come only once in a lifetime. I have no regrets.

Are movies like Jurassic Park the best way to convey scientific research and its implications to the general public?

Movies and fiction stories do convey messages, but the messages are more futuristic than realistic, and often exaggerate the menacing aspects to elicit an emotional reaction. Based on my experience teaching nature to kids at YMCA camps years ago, we are born with an inquisitive nature and are fascinated with life around us. It is just that later, many of us fall under the influence of commercialization and find it difficult to amalgamate our lives with the natural world.

What advice would you give a young scientist today, just starting out?

Choose a subject that interests you and study it as long as you can, no matter what life throws at you. As long as you are fascinated with your work, it isn’t really work and that part of your life can be exciting and at least bearable. The education process never ends, even when you finish your formal education. New discoveries show that there is always more to learn.

When you look at creatures from 100 million years ago preserved in amber, do they speak to you? If so, what is the message?

These strange, amazing life forms from the past, most of which differ from anything around today, challenge our present classification of organisms. When I look at them, frozen in time millions of years before we evolved, I imagine them saying, you will never be able to understand what I was, how long I survived and what caused my demise. And they are right.