Ben ('51) and Elaine Whiteley ('53) have long exemplified a deep commitment to service, to actively helping others without thought or expectation of reward or attention.

Ben grew up in Des Moines, Iowa, where he became interested in the insurance company where his father worked and eventually transitioned into actuarial science.

When his family moved to Portland, Ben transferred to Oregon State after spending one semester at the University of Iowa. In the 1950s, OSU did not offer an actuarial program, so Ben studied business and technology, filling his elective courses with mathematics.

He met Elaine Yunker, daughter of OSU Physics professor Edwin Yunker, on a blind date. Three years later, they married one week after graduation Elaine graduated from OSU after studying secretarial science and then home economics 1953. That was 63 years ago.

Ben earned a master’s degree in mathematics at the University of Michigan before serving as a first lieutenant in the U.S. Air Force for three years at Wright-Patterson Air Force Base in Ohio.

“I got a direct appointment as an officer in the Air Force doing mathematical and statistical research,” explained Ben.

Elaine was able to put her secretarial skills to work on the base before giving birth to their first son, Steve.

January 1, 1956. That was the first day of Ben’s career at Portland-based Standard Insurance Company, where he would work for 39 years. He served as CEO from 1983-94 and continued serving on their board until 2000—a total of 44 years. 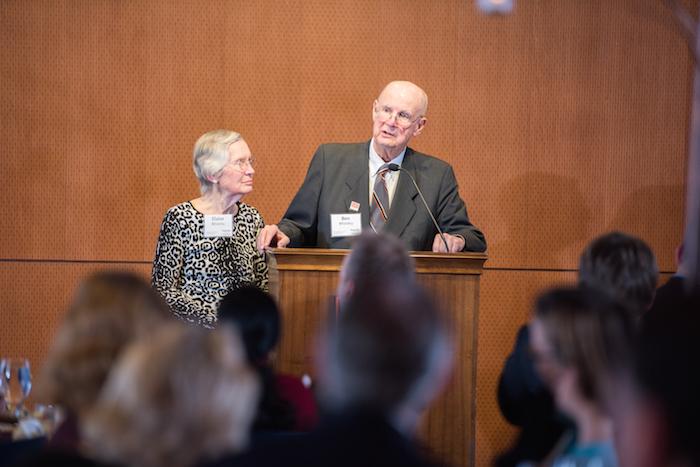 Ben served as chairman of the Greenbrier Corporation for 10 years and also on the boards of Northwest Natural, U.S. Bancorp and Willamette Industries. He is a lifetime trustee of the OSU Foundation and has chaired the board of Pacific University, Oregon Community Foundation, OHSU Foundation, Portland Opera Association, Cascade-Pacific Council of Boy Scouts of America and Arlington Club.

Elaine has been active with Delta Gamma, P.E.O., Portland Opera Guild and Portland Civic Theatre Guild over the years.

Her father, Dr. Edwin A. Yunker, was part of the OSU physics faculty from 1925-68, and served as department chair from 1949-66. He helped transform the Department of Physics into a modern, research-oriented physics department. In 1985, he and his wife Gertrude established the Yunker Lecture Series to bring outstanding physicists to OSU, presenting talks for students and a general audience.

Elaine’s brother, Wayne, pursued a career in science, receiving his Ph.D. in chemistry from the University of Washington after attending OSU.

“My father used to give me and Wayne little lectures — things he thought we should know and that he hoped would soak in a bit,” said Elaine. “Wayne probably soaked up those lectures more than I did!”

The love of physics seems to have hit Elaine and Ben’s son, Steve, who earned a Ph.D. in electrical engineering and physics from the University of California, Berkeley. “I think Steve learned a lot from my father,” explained Elaine.

The Whiteley’s other son received a bachelor and master’s degree in music from the University of Michigan, and has had a successful career conducting Broadway musicals in New York and elsewhere.

Ben and Elaine both have a deep appreciation for the arts, but they their giving to OSU has taken a different direction.

“We know that there are a lot of deserving programs in Science, and we have tried to make sure that our donations go where they are needed most,” said Elaine. "High college costs are hard for a lot of students. We wanted our contributions to go where the College needed the money most for science.”