With his unwavering belief in the power of science to improve lives and move the world forward, Roy Haggerty has been advancing knowledge at Oregon State for over 26 years.

An exceptional scholar and earth scientist, he has actively sought to expand his contributions as a leader by opening doors for others to develop and propagate a better understanding of the world, and to use that knowledge for the benefit of everyone – particularly in science, “the single greatest force for good in human history.”

Now Haggerty, College of Science dean since 2017, is leaving to become executive vice president and provost at Louisiana State University, the state’s flagship institution that educates more than 35,000 students.

“I have looked forward to coming to work almost every day for over 26 years. And what kind of career can one ever have where that's the case? I’ve been very fortunate.”

“I am looking forward to this opportunity,” he said. “At the same time, I am exceptionally grateful for the opportunities I’ve had here. I work on a beautiful campus with wonderful people who are trying to figure out how life and the Universe work and with brilliant students who are preparing for careers in science.

“I have looked forward to coming to work almost every day for over 26 years. And what kind of career can one ever have where that's the case? I’ve been very fortunate.”

Haggerty is appreciated across the university for his can-do and never-quit approach and stalwart commitment to principles of integrity. He also demonstrates deep humility, readily recognizing and accepting his own limitations.

With his characteristic good-humor, he is quick to share anecdotes that remind him to be humble, like the time a school teacher likened his intellect to Einstein, but then forgot who he was when he returned years later to thank him. “Over my life, I've learned to care for myself, and one of the ways that I care for myself is to be able to laugh at myself. Cultivating an ego that is small is a big part of that,” he said.

Hailing from a rural town in Alberta, Canada, Haggerty was the first in his family to attend college, earning a B.Sc. in honors geology from the University of Alberta and his master’s and Ph.D. in hydrogeology from Stanford University.

He joined OSU in 1996 and was part of the College of Science faculty for 15 years before moving to the College of Earth, Ocean, and Atmospheric Sciences, where he held the Hollis M. Dole Professorship in Environmental Geology for seven years. He was also interim dean for a year where he oversaw the team developing the Regional Class Research Vessel (RCRV) program and was instrumental in bringing the 84-foot Pacific Storm into the college fleet of research vessels.

In 2016, he was appointed associate vice president for research, where he was the chief operating officer for OSU's Office of Research. There, he expanded the research incentives program, developed a plan to increase OSU’s facilities and administrative cost recovery and was a strong advocate for research across campus.

An elected fellow of Geological Society of America, he has led research projects totaling $9 million and published 75 peer-reviewed articles, mostly in the area of hydrology.

Haggerty has advanced the College’s research and teaching with skill and focus. He is noted across the university for his skill at fostering successful collaborations among faculty, staff, students and external partners to harness their collective insights and experience.

“Roy has been a spectacular dean – one who listens, anticipates, empowers and enables – a true leader,” said University Distinguished Professor Jane Lubchenco. “He leaves the rich legacy of a strong College – full of enthusiasm, extraordinarily capable people, purpose and agency.”

Because research drives the mission, Haggerty led the College to an increase in research funding of more than 50 percent, in large part through SciRIS, a stage-gate research program designed specifically to create, mentor and fund high-performing research teams. Part of its aim is to increase success in future funding opportunities – exemplified by seed money awarded to scientists such as biochemist Ryan Mehl for his groundbreaking work on expanding the genetic code to engineer new therapeutics. The National Institute of Health (NIH) awarded Mehl $5.6M in 2021 to launch GCE4All, the world’s first genetic code expansion (GCE) center.

"In a short time, Roy has invigorated the College, elevated students and diversified our ranks and thinking."

“Universities must expand knowledge,” Haggerty explained. “Otherwise, they become like photocopiers, and we're just photocopying a photocopy of a photocopy. And so universities – not every person at a university, not every university necessarily, but R1 universities – must be expanding knowledge. Scholarship has to drive the mission. It's absolutely essential.”

Applying knowledge to improve human wellbeing matters to him, too. At the start of pandemic, Haggerty was an early and persuasive advocate for fast and decisive action through TRACE, which tested 80,000 people for COVID-19 at Oregon State and across Oregon. “TRACE is an excellent example of Roy’s leadership,” explained co-founder Lubchenco. “The program began as OSU Associate Professor Ben Dalziel’s seed idea — shared with Roy and me — and blossomed into a vibrant, pioneering effort that enabled OSU, Corvallis and the state to have powerful information to guide their COVID efforts and became a national model for universities serving their communities.”

Since nearly every student at OSU takes classes in science, education is always top-of-mind for Haggerty. To help address retention gaps in different student populations, he co-founded Beaver Connect, an OSU-wide faculty-student mentoring program involving hundreds of faculty and peer mentors. The program resulted in a 7.4% increase in first-year retention among underrepresented, first-generation and Pell-eligible students.

“In Roy, I have seen a leader who is focused on creating a welcoming College so that everyone, students, faculty and staff, can thrive and succeed.”

Among other initiatives, Haggerty also co-founded and co-led the Undergraduate Student Success Initiative and enhanced the College’s Learning Assistants program, which has helped significantly to increase student success rates in “gateway” classes in physics, chemistry, mathematics and biology.

One major challenge Haggerty faced when stepping into the role was a significant structural budget deficit in the College. He was able to balance the $45M budget in one year with revenue-generating activity and by trimming central administration, then kept it balanced for three more years, even during the pandemic. He also built up a reserve to handle fluctuations. During Haggerty’s tenure, the College of Science has had several of its best private fundraising years, raising more than $40M in the past 4.5 years.

He leaves optimistic about the College’s many strengths and hopeful future. “Many new faculty are going to be joining us, and that's going to bring new life and energy into an already great place," he said. "The research mission will continue to grow, and I’m confident that Oregon State is going to have some really big successes in the College of Science in the next few years.

“We're also starting to have positive developments in the equity access and inclusion area. I think we're doing this in a healthy way. We’re having honest conversations that I think are going to help us to be better in this space in the coming years.”

Provost Ed Feser observes that Haggerty “has been a tireless supporter of building strong departments and faculty as the fundamental building blocks of a great university. As he steps down in July, he will have overseen the hiring of more than one-fifth of the current faculty in the College of Science.”

He and other colleagues note that Haggerty has served the College of Science and the entire university with passion, leaving OSU a stronger a place.

“In a short time, Roy has invigorated the College, elevated students and diversified our ranks and thinking. We will miss Roy and Amanda dearly and wish them well in all of their endeavors,” Lubchenco said. 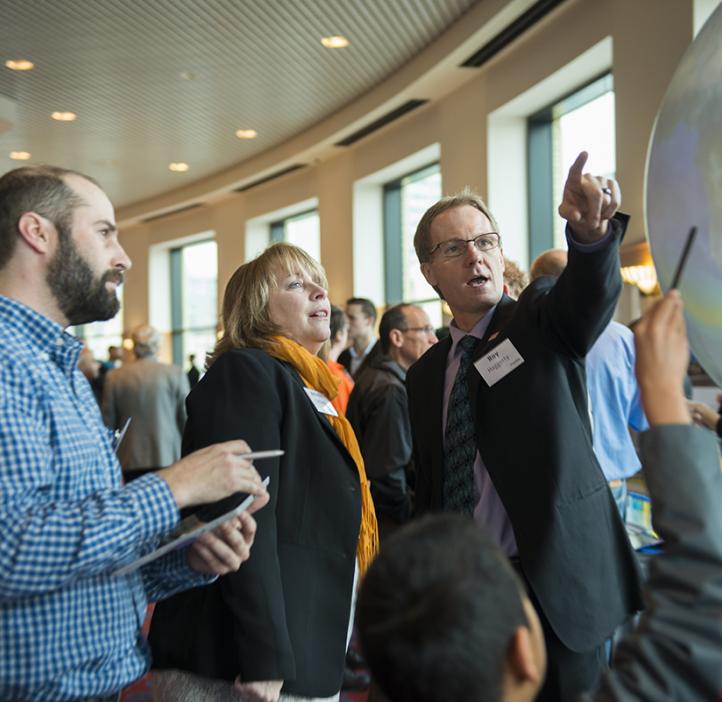 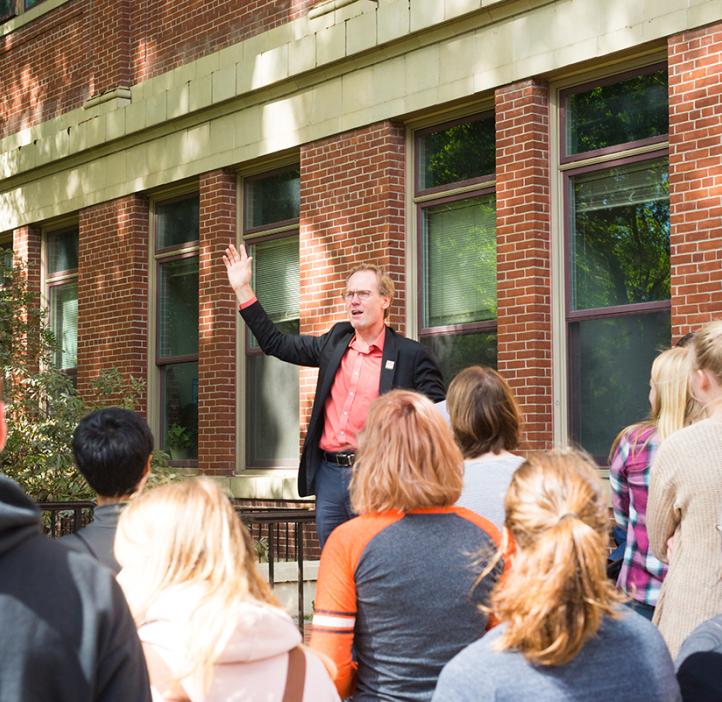 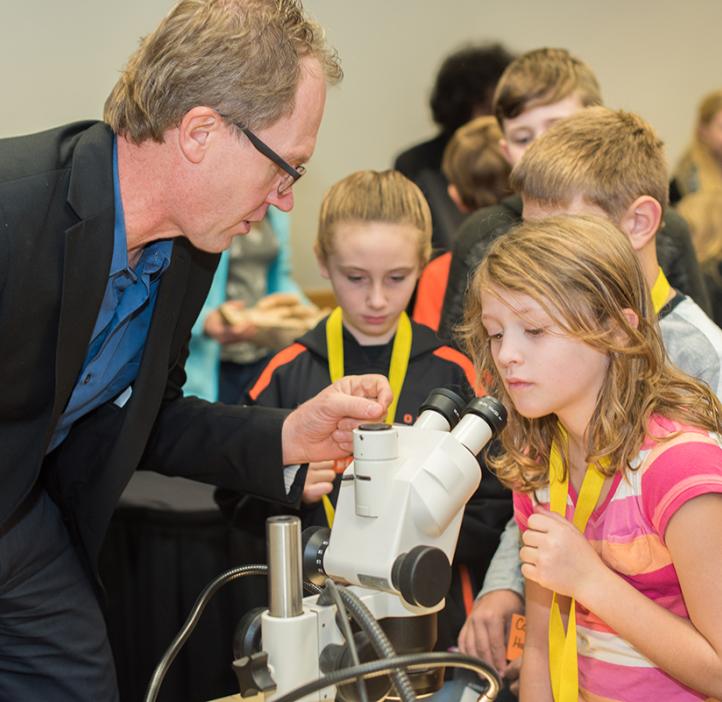 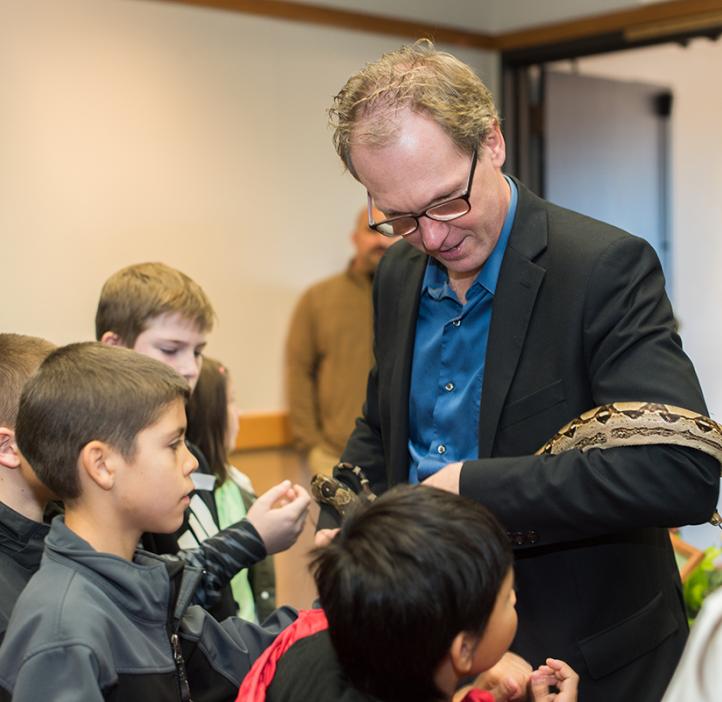 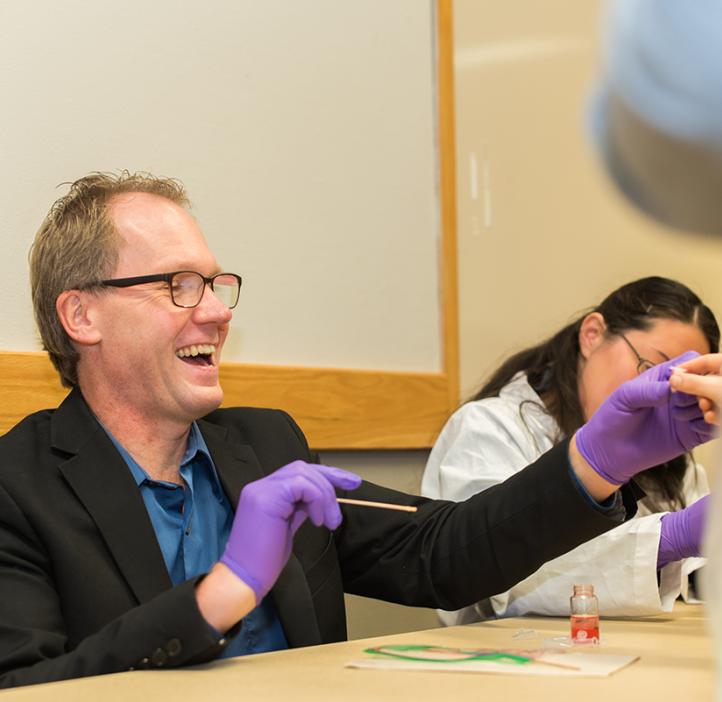 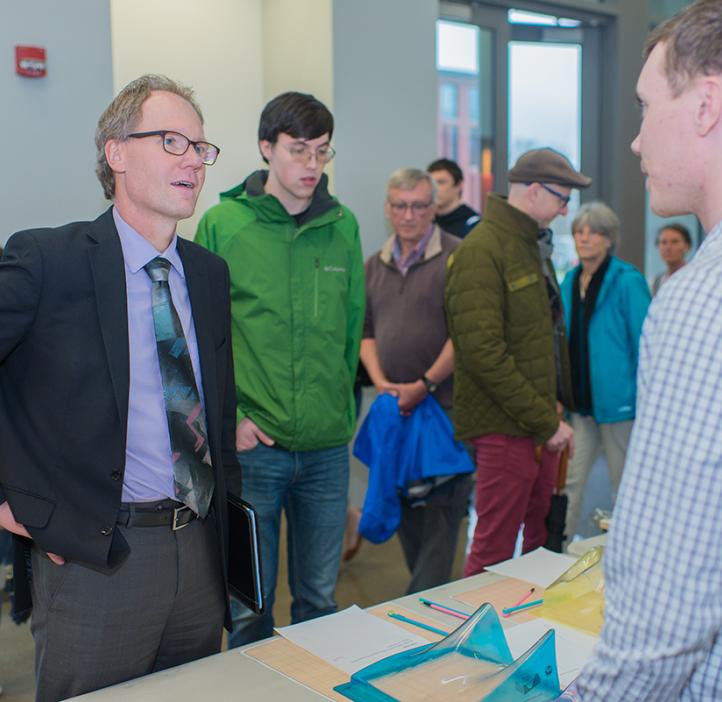 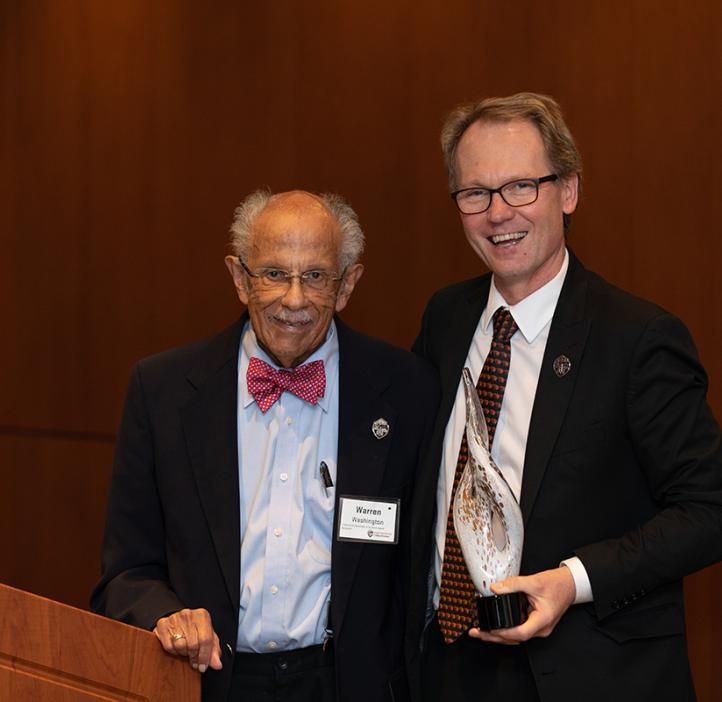 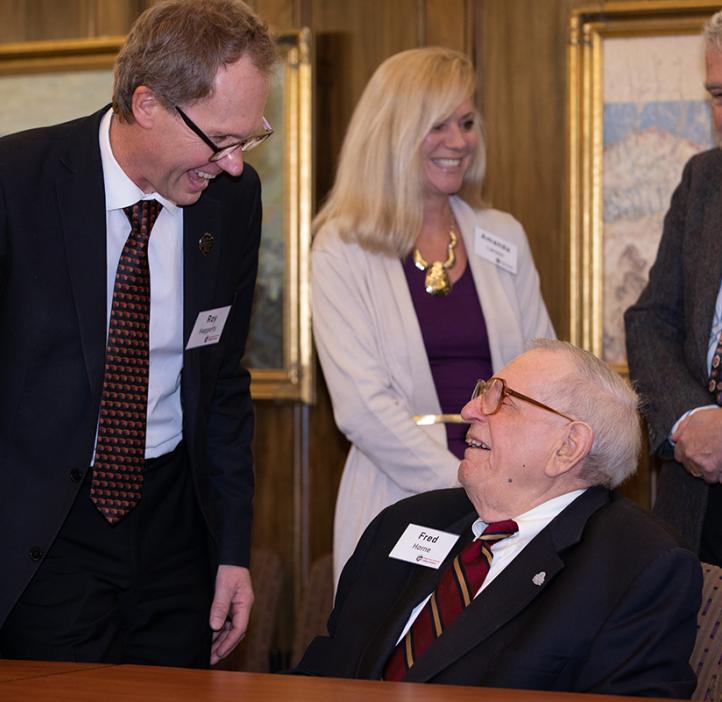 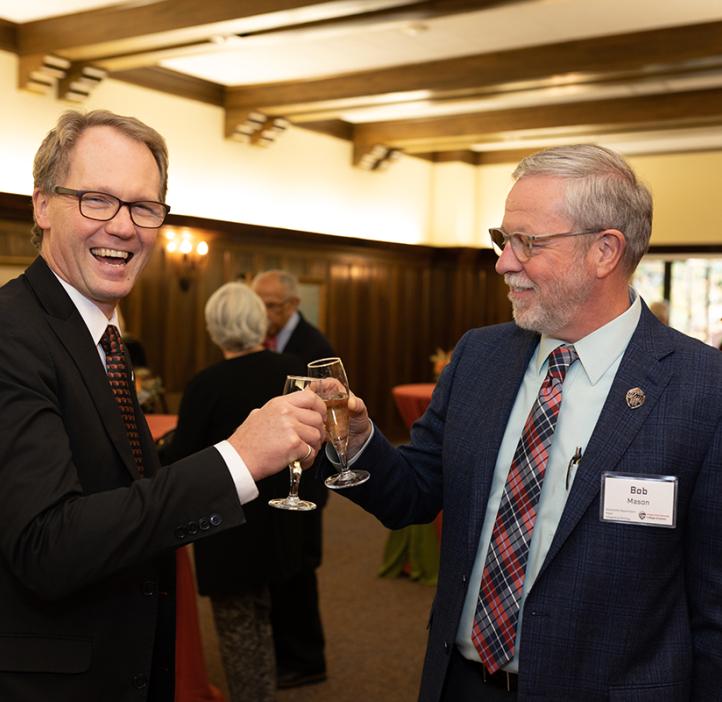 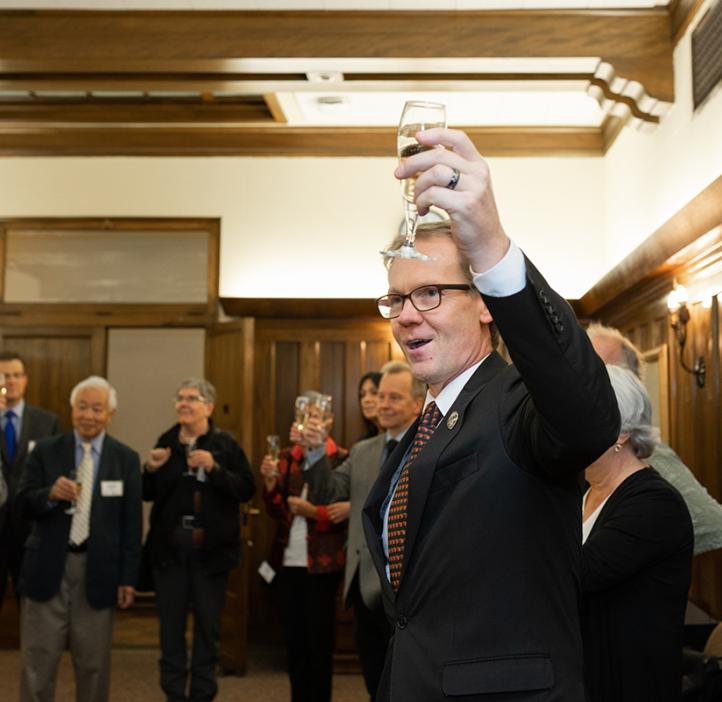 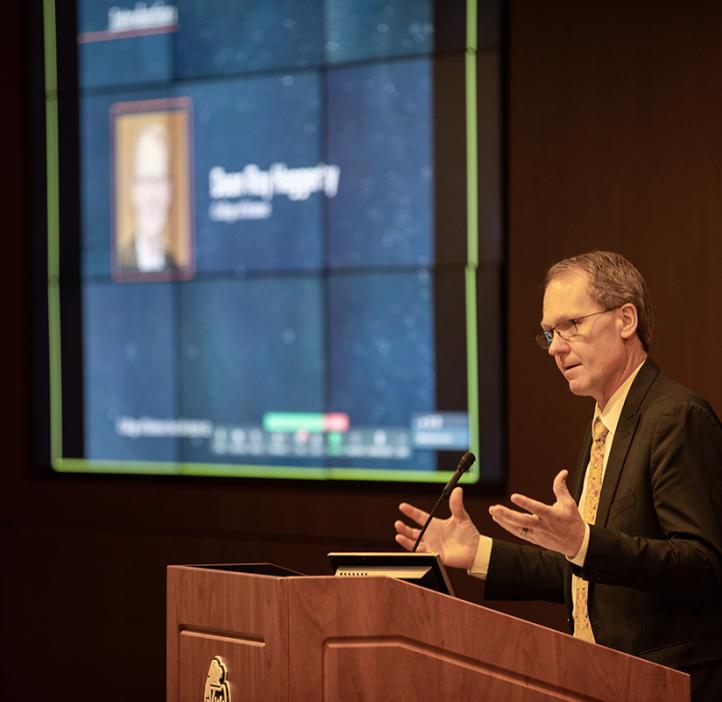 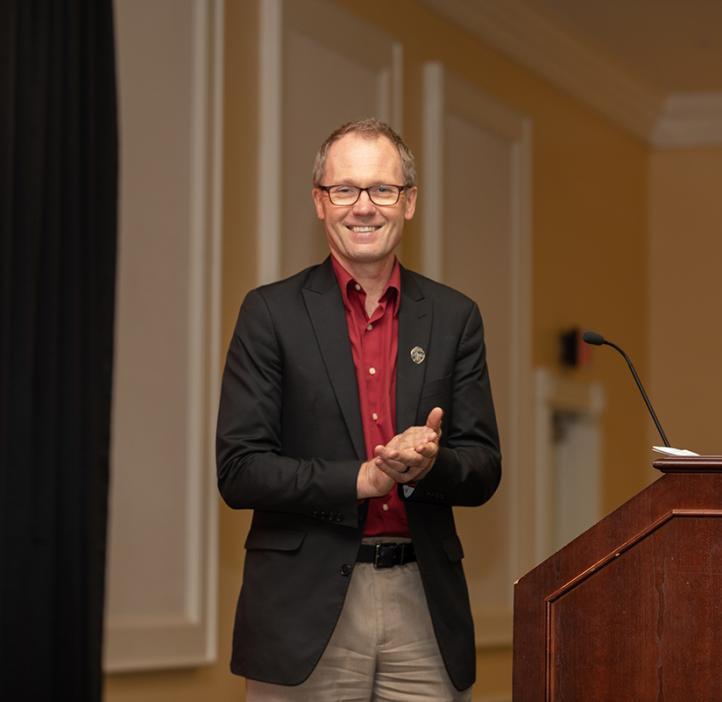