Cody Fretwell found the BioHealth Sciences (BHS) major by accident. “I signed up for the biology major during orientation, but when it came time to register for classes, I somehow ended up with all the BHS kids,” he said.

At that point,  his career goal was to become a physician’s assistant (PA), and he saw that BHS had the Pre-PA academic option. This option is designed to meet most or all of the requirements for admission to PA programs across the U.S. and includes the opportunity to interact with medical and industry professionals to gain hands-on experience and skills and to explore potential career paths through job shadowing.

Fretwell decided to switch majors from biology to biohealth sciences with the pre-PA option.  Four years later, Fretwell is happy with his decision. “I’ve enjoyed a lot of the classes specific to my major, focusing more on the human aspects of biology.”

While BHS gave him a great foundation for a career in healthcare, Fretwell decided to drop the Pre-PA option in the fall of his junior year when he discovered a greater career dream: medical device sales.

A foundational commitment to healthcare

Early on, a significant event in his family put Fretwell on the path to healthcare. When he was going into 8th grade, Fretwell’s twin sister was struck by a car while walking on a sidewalk with a friend. She was life-flighted [airlifted] to Oregon Health and Science University Hospital (OHSU) for emergency brain surgery. Hardworking medical professionals saved her life and changed Fretwell’s, too.

“She had to get a part of her skull removed to help with the swelling,” he said. “When they put it back on, they added a metal plate. A family friend of ours in the room at the time actually worked for the company that sells that metal plate.”

Although it would be a few years before Fretwell considered medical device sales as a career, his commitment to healthcare was solidified in that moment.

“Learning how my sister’s brain worked, how the surgery would affect her long and short term, and what we could do to help her recover best, it sparked something in me,” he said. “The neurosurgeons in the ICU and the rehabilitation people were all so intelligent and kind. I aspired to be like them.”

Thanks to their hard work and the support of her family, Fretwell’s twin sister made an amazing recovery and graduated from college this spring. “If you looked at her or talked to her, you would have no clue it ever happened,” he said. 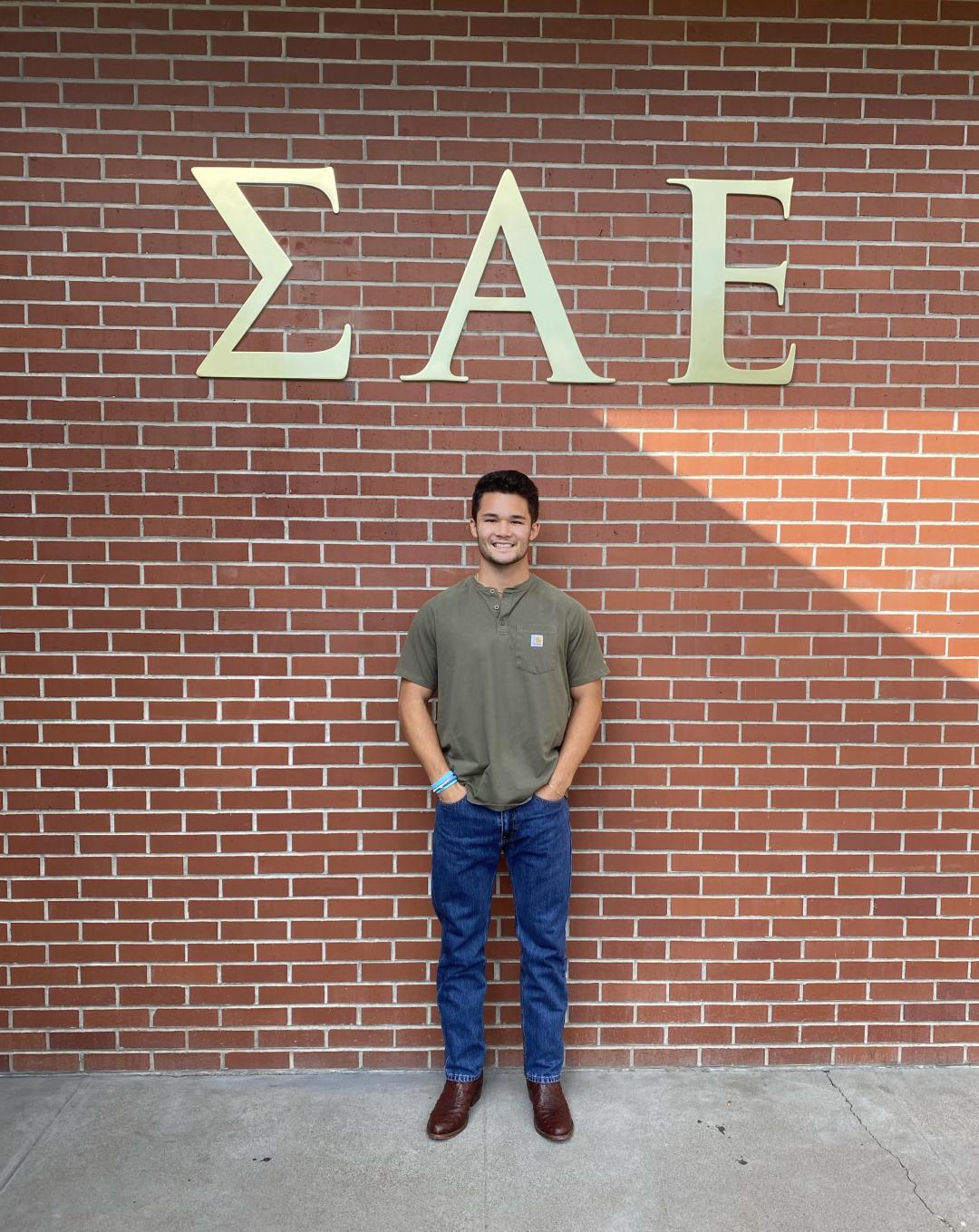 During the pandemic, Fretwell stepped in as president of his fraternity, which taught him key skills he can apply to his career. “It is essentially like running a business. I have an executive team, I have meetings, and I have to pay attention to the needs and desires of 125 college guys. It taught me to prioritize tasks, to check off one thing at a time, to delegate, to network and build relationships.”

Returning to the operating room

Coming to OSU, Fretwell was driven to make a difference in the lives of patients. As a BHS major, he pursued an interdisciplinary course of study that combined a strong foundation in biological science with its application to human health and society. He found excellent professors who proved that compassion in healthcare extends to education.

“One of my favorite courses was microbiology, specifically because of the labs and because of Allison Evans. I love her. She is the nicest human being I’ve ever met. She genuinely cares about you,” Fretwell said.

“It was the same way in anatomy with Lori Kayes. If you took time to go to the office hours, she knew your name. Putting in the effort to do that, shows that you really care.”

Being a BHS major also introduced him to some of his favorite courses. “I really enjoyed Mechanisms of Disease [BHS 329] and Microbial Influences on Human Health [BHS 323]. I wouldn’t have taken those classes if I wasn’t a BHS major.”

The summer before junior year, Fretwell shadowed a PA at OHSU as part of his BHS academic option. He returned to the hospital where his sister had undergone surgery, but this time, he got to be in the operating room.

“It was the best feeling I’ve ever had in my entire life. I thought, ‘Ok, this is what I want to do for the rest of my life.’”

“I had the opportunity to ‘scrub in,’ and the surgery I got to watch was absolutely incredible.” Fretwell observed a procedure where a patient’s mandible was removed, and a piece from their fibula was used to replace it. “It was the coolest thing I’ve ever seen,” he said.

He paid particular attention to role of the medical device representatives, or reps, who were present there in the OR. “The part that they used to set up the saw and make cuts was sold by a company whose rep told the surgeon how to set it up and what tool to use.”

When it came time to insert plates, the medical device rep presented the surgeons with options: a custom 3D printed piece, or a metal piece that was molded to fit specifically for that patient. “The surgeon chooses, and the device rep explains that with this piece you use these screws, and so on.”

After the surgery, Fretwell walked out of the OR with the surgical team. “On our way out of the door, someone stopped us and said, ‘Thank you so much, you made a difference in someone’s life today.’” This chance expression of gratitude from a stranger moved him. “It was the best feeling I’ve ever had in my entire life. I thought, ‘Ok, this is what I want to do for the rest of my life.’”

At that point, Fretwell had a decision to make: stay on the pre-PA path, or start preparing for a career in medical device sales. After talking to family and friends in the medical field and to his advisor Tiffany Bolman, who had previously worked in the industry, he decided to make the switch.

The diversity of medical devices used to assist in surgery inspires him. “I’ve heard that there’s movement, you can go from cardiac to neuro to spinal, if you want to. You just need to get trained in what devices are sold for each of those different things.”

Down the line, he plans to participate in research and development as well as sales. “My ultimate goal, would be to contribute to developing a new device,” he said.

“My goal with medical device sales is to enhance someone’s quality of life, so they can breathe that much easier.” 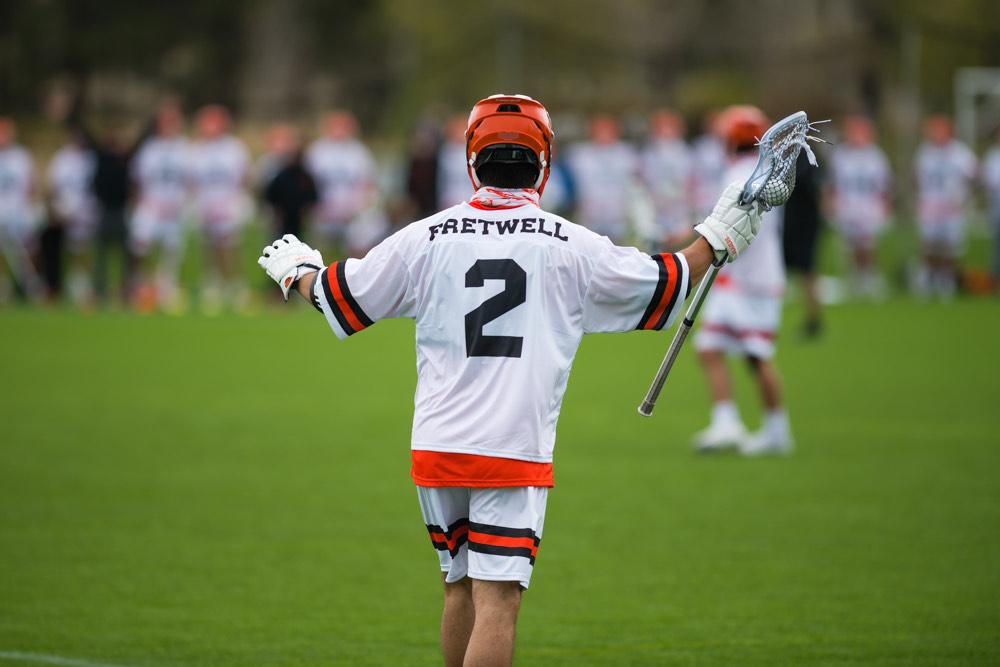 Fretwell played lacrosse while at Oregon State. “I loved traveling and going to sporting events all over the country.”

As he embarks on this exciting new career path, Fretwell reflects on his experiences as a science student. Success looks different from what he pictured at first.

“Freshman year, I struggled,” Fretwell said. “I went to the library every day and got help from TAs, but I had no social life.”

It took some time for him to realize endless hours in the library weren’t his recipe for success. “Your brain can only take so much,” he said. “I finally started to do well, once I learned how to properly study and find a balance.”

Initially intimidated by office hours, Fretwell overcame that with his family’s support. “It took multiple calls to my mom, and her telling me to get my butt into office hours. Once I actually did it, I found out that professors do want to help.”

Fretwell also joined a fraternity and found older friends who were in the same major with the same option. “They would sit me down and tutor me. I didn’t really think I wanted or needed tutoring at all, but it was huge.”

During the pandemic, he stepped in as fraternity president, which taught him key skills he can apply to his career.

“It is essentially like running a business. I have an executive team, I have meetings, and I have to pay attention to the needs and desires of 125 college guys. It taught me to prioritize tasks, to check off one thing at a time, to delegate, to network and build relationships.”

As he gets ready to graduate, Fretwell says he’ll miss the science student experience of bonding over homework together, making learning communal and fun.

“As odd as it sounds, I’ll miss the late-night study sessions at the library, where you just sit down at a white board and try to come up with silly names to try and remember stuff. You’re working hard, but it doesn’t feel like it because you’re having fun at the same time.”

Fretwell will carry that enthusiasm and creativity into the next phase of his career, which will involve interviewing and networking to land an internship or associate position and getting a few years of experience to work his way to a device rep position.

Remembering the gratitude he’s felt on both sides of surgery keeps Fretwell motivated. His personal philosophy for his career comes from a Ralph Waldo Emerson quote that one of his high school instructors gave him: “To know even one life has breathed easier because you have lived. This is to have succeeded.”

“My goal with medical device sales,” he said, “is to enhance someone’s quality of life, so they can breathe that much easier.”