College of Science faculty were awarded $15.82 million in new research grants and awards in fiscal year 2020. The awards are equally distributed between faculty in the School of Life Sciences—which includes integrative biology, microbiology and biochemistry and biophysics and those in the departments of physics, chemistry, statistics and mathematics. The previous year’s total was $16.64 million.

As the chart below indicates, most of the College’s funding was awarded by federal agencies with the National Science Foundation ($4.74M) and National Institutes of Health ($2.41M) leading the list. Foundation and industry awards contributed $2.29M. 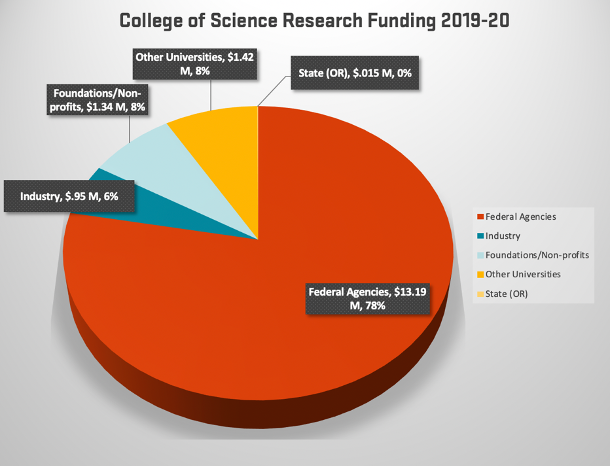 For the fiscal year, the number of research proposals submitted by the College was 143 this year – up 3% from 139 submitted in fiscal year 2019. The total requested funds from grant proposal submissions was $81.5M, up from $65M the previous year. See chart below for award distribution. 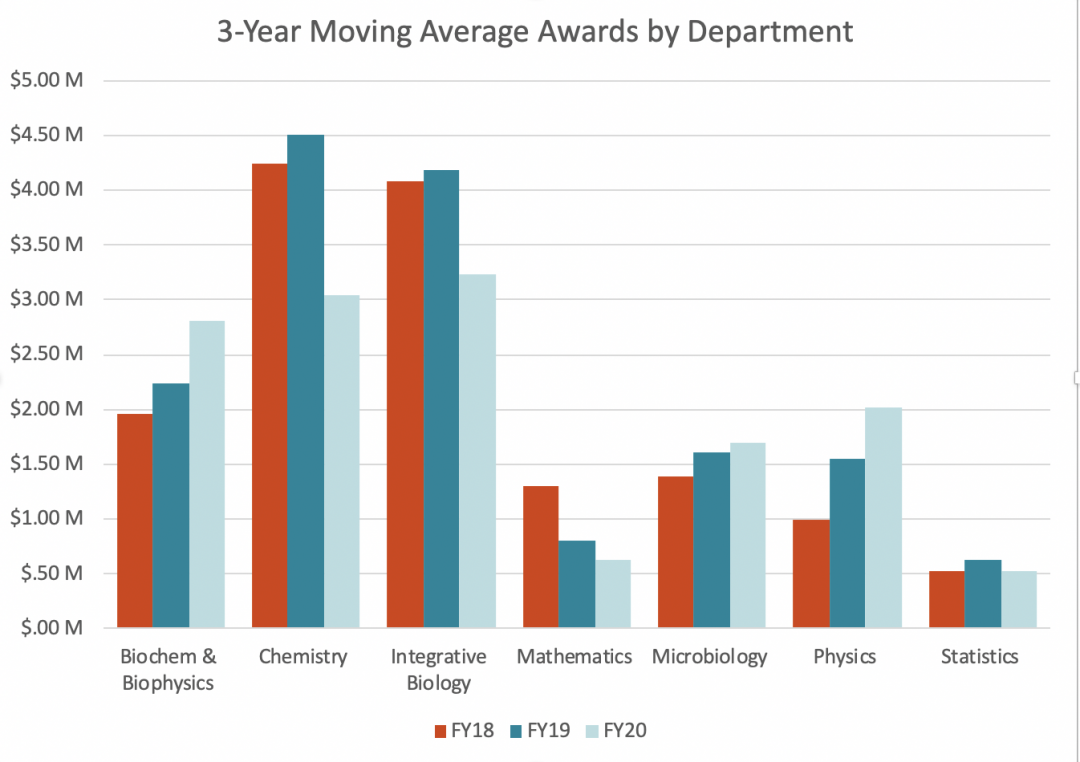 Many science faculty received substantial research grants this year. Below are just a few notable awards that demonstrate the College’s breadth of research in the life, physical, mathematical and computational sciences.

Ecologist Benjamin Dalziel received a $800K grant from PacificSource Health Plans and a $750K grant from the David and Lucile Packard Foundation for the project entitled “Team-based Rapid Assessment of Community-level coronavirus Epidemics” or TRACE-COVID-19. This groundbreaking project is gathering timely information to inform measures to slow the spread of the virus SARS-CoV-2, and minimize the impact of the disease. Using a community-based approach, the study rapidly assesses the prevalence of the coronavirus in Corvallis, Bend, Newport and Hermiston – with the goal of expanding to other Oregon communities and across the nation.

Coral microbiologist Rebecca Vega Thurber received a 3-year, $627K NSF grant for her project "Tracking the interacting roles of the environment, host genotype, and a novel Rickettsiales in coral disease." Her project aims to uncover the holistic mechanisms of disease susceptibility in the critically endangered staghorn coral, Acropora cervicornis, to help practitioners work more effectively toward conservation and restoration.

Biochemist Colin Johnson received $336K from the National Institutes of Health — Institute on Deafness for his project "In vivo and in vitro studies of the deafness associated protein otoferlin."

Biochemist Viviana Perez received a two-year, $400K grant from the National Institutes of Health for her project, "Nrf2 deficiency as a prime modulator of cellular senescence and Alzheimer's disease."

Microbiologists Kimberly Halsey and Stephen Giovannoni received a $685K grant from the National Science Foundation for their project entitled "Interactions between phytoplankton and bacterioplankton mediated by volatile organic compounds.”

Chemist May Nyman received a three-year, $540K grant from the U.S. Department of Energy for her project, "Hydrolysis, self-assembly and supramolecular assembly of early transition metal-oxo clusters: MOF nodes and aqueous reaction pathways."

Chemist Rich Carter received a $438K grant from the National Science Foundation to study adding innovation and entrepreneurial achievements into the criteria for higher education faculty promotion and tenure.

Looking ahead: Positive momentum for FY21

Two months into the new fiscal year, the College is seeing strong momentum with significant awards totaling more than $3.48M already. Below are just a few incoming awards received since July 1, 2020:

Biochemist Elisar Barbar received a two-year $300K EAGER grant from the National Science Foundation to pursue research on SARS-CoV-2 coronavirus that causes Covid-19. The research project is aimed at understanding how the N-protein of the SARS-CoV-2 performs its essential functions in viral infection and transmission. Associate professor David Hendrix and Rick Cooley, a research assistant professor in the Department of Biochemistry and Biophysics, are collaborators on the project.

Mathematicians Vrushali Bokil and Nathan Gibson were awarded $225K from NSF's computational mathematics program for their project "Computational and Multi-Scale Methods for Nonlinear Electromagnetic models in Plasmas and Nanocomposites."

Physicist Bo Sun received $528K from the Department of Defense for a project entitled “Decoding the mechano-regulation of breast tumor organoid invasion – one cell at a time.”

Physicist Weihong Qiu was awarded a $316K grant from the National Institutes of Health for his project entitled “Mechanistic Analysis of Kinesin-14 Motility and Regulation for Bipolar Spindle Assembly.”