Zelma Long (’65) is one of America’s best-known winemakers. Considered a pioneer in California wines, she is known for cultivating premium wines with scientific rigor, focus and discipline for more than 40 years.

Long earned her reputation quickly while working in key posts at several California wineries, notably Robert Mondavi Winery. Then in the last 25 years, she extended her global influence in the wine industry through consulting work in France, Argentina and Israel, and through the success of her own estate, Vilafonte, in South Africa. She has won impressive distinctions over the years, including among many, the James Beard Award for Wine Professional of the Year, the American Society for Enology and Viticulture’s Merit Award, and now the College of Science’s Distinguished Alumni Award.

But the world has more to see from this accomplished winemaker. She is still pushing herself to unleash her full potential.

This December, Long will receive her Ph.D. in Performance studies with a designated emphasis in Native American studies from U.C. Davis. Her South African winery just won an international award. And there are more projects to come.

“I feel I was put on earth with certain potential, and I want to make the most of that,” says Long. “I think that’s an expectation for every person – to know who they are and make the most of it.” 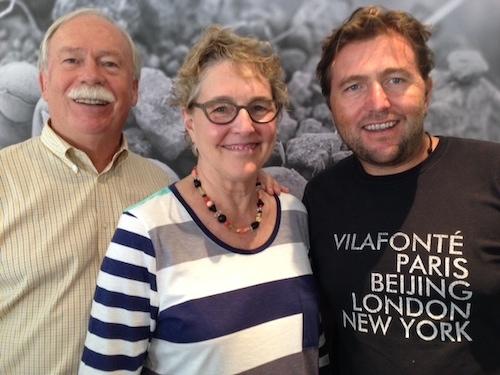 Long exemplifies one who has aligned her life’s work with deep-seated interests. She relishes the role science has played in her education and in her work, and her advice to college students grappling with career direction is to follow their intrinsic interests. Study what fascinates you. In Long’s undergraduate years, that was science.

“You will always do best at something you deeply enjoy,” she explains. “And it’s not just a matter of pleasure. It’s a matter of enjoying it enough to be willing to go deeply into that subject, and to be persistent in the development of your skills.”

A native of The Dalles, Oregon, Long majored in general science at Oregon State University with a minor in nutrition. Not surprisingly, she graduated as one of the top three women in her class along with two friends in her Kappa Kappa Gamma sorority.

“My science education has been so valuable to me in being able to follow what goes on in the world and in my discipline,” Long says.

Long began her career as a dietician in the Bay Area but found the work unsatisfying. “Those were early days when people, and I mean doctors, didn’t really pay a lot of attention to good nutrition, while today we almost treat food as a health drug. But at that time, it wasn’t really appreciated,” she says.

She then moved to the Napa Valley with her husband, whose parents had purchased a piece of hillside property to start a vineyard. This motivated her to go back to school to seek a master’s in enology and viticulture from UC Davis. In winemaking, she hit her stride. Since then, she has focused her energy on pushing the boundaries of high-quality wine, rather than the production of high volume, middle-priced wines.

While at UC Davis, Long was invited to work as an intern at Robert Mondavi Winery, “which was a brand new winery with a visionary owner.” She interrupted her education, and after working at a harvest, she was hired on part-time the next year, then full-time the following year. Soon after, she became chief enologist. In 1979, she was recruited by Simi Winery as head winemaker and later as CEO.

In 2000, Long launched out on her own as an international adviser to wineries around the world, and with her husband, Phillip Freese, established the Vilafonte vineyards in Paarl, South Africa with a Vilafonte “urban winery” in Stellenbosch. The success of this project has been her most satisfying achievement thus far.

“This was something that my husband and I did together. Both of us were very experienced at that time in wine – he in wine growing and me in winemaking. We bought raw land, planted it, developed it, and with a South African partner, now have a very solid business,” she says.

Vilafonte produces two Bordeaux blends: a Series C which is a Cabernet style, and a Series M which is a Merlot-Malbec style. Long was just notified their wine won an international competition in the Bordeaux blend category, an award to be announced in October.

“Our goal was to produce a wine that would have world-class recognition, and that was fun – to start a business in another country, and to bring it to a successful financial position and a highly respected wine quality. In a sense, this project is a culmination of our professional life and development of expertise.”

Long is well qualified to address what qualities cause a winemaker to stand out. First, she explains, it takes a continuing supply of the highest quality grapes, and a sophisticated knowledge of when to harvest and how to extract the flavor and structural components from the grapes. And then it requires an understanding of the evolution during aging, and the timing of the bottling and the blending.

“It’s a high-level skill because you’re basically growing the wine in the vineyard,” says Long. “A vineyard for fine wine is like a garden; it needs constant, meticulous attention. Then the winemaking process requires a vision and sensory skills to follow the wines clear through the fermentation and aging, and the technical skills to monitor the biochemistry and microbiology.”

No one lucks into a great bottle of wine. “Maybe a hundred years ago you did, but not now,” she says.

The alchemy of winemaking

Part of the joy of winemaking is its demand of both scientific precision and artistry – a complexity few people master.

“Science is essential in achieving top-quality wines, from my perspective – understanding the biology and physiology of the grapevines and the grapes, the chemistry of the grapes, microbiology, and fermentations. There is a lot of science in this discipline.”

Also essential is the art, the sensory part of winemaking. People value and use visual senses and aural senses, Long explains, but taste as a skill has had less development and a lesser, albeit growing, appreciation.

“The art in winemaking is the ability to vision what you want to accomplish with wine, and then to put together a process to do that. This takes into account that you’re not really in control when you work with nature. Through the whole process, the work of blending the wines is not just following a formula. It’s understanding and tasting the wines and then knowing how they need to come together.”

Clearing a path for women

Long is often referred to as one of the female pioneers in California wine, and she acknowledges that this is true. She broke barriers in the industry and paved the way for many prominent female winemakers. Her primary focus, however, has always been to simply excel in her work.

Long never set out to blaze a trail as a female winemaker. She acquired knowledge, diligently applied that knowledge throughout the winemaking process, and produced premium wines that earned acclaim.

“You know how life is. You live your life. You don’t always have the perspective on it until you do 40 years later, but I just loved what I was doing,” says Long.