College of Science faculty were awarded $16.64 million in new research grants and awards in fiscal year 2019, an increase of 45.66% from last year’s total of $11.3 million. The awards are distributed equally between faculty in the School of Life Sciences—which includes integrative biology, microbiology and biochemistry and biophysics) and those in the departments of physics, chemistry, statistics and mathematics.

For the fiscal year, the number of research proposals submitted by the College was down 10% relative to FY18.  The total requested funds from grant proposal submissions decreased from $95M to $65M. As noted above, awards nevertheless showed an increase to $16.64M from $11.3M last year. See chart below for award distribution. 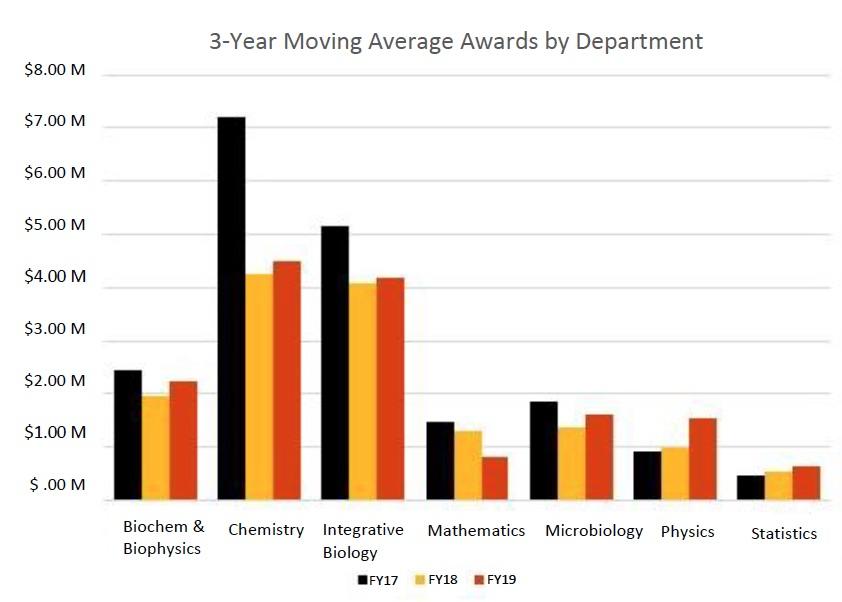 As the chart below indicates, most of the College’s funding was awarded by federal agencies with the National Science Foundation (34.51%) and National Institutes of Health (17.23%) leading the list. Foundation and industry awards contributed 15.57%. 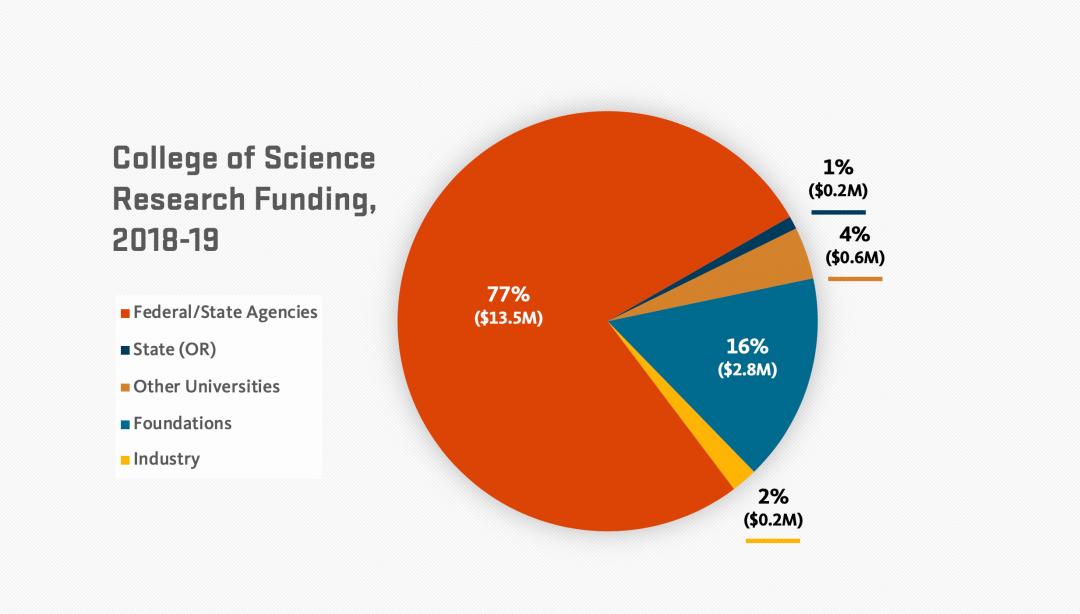 Many science faculty received substantial research grants this year. Below are just a few notable awards.

Marine ecologist Bruce Menge received a two-year renewal grant of $2 million from the David and Lucile Packard Foundation for his long-running consortium “Partnership for Interdisciplinary Studies of Coastal Studies: PISCO Science for an Informed Society.” Established in 1999, PISCO maps intertidal communities from Mexico to Alaska and the climate cycles that affect them.

Biochemistry and Biophysics Professor Michael Freitag received a 4-year, $840K NSF grant for his project “Control and function of chromatin-mediated gene silencing in fungi.” The project seeks to uncover how specific genes are targeted and inactivated by Polycomb Repressive Complexes, using fungi as convenient model systems. Possible societal impacts include a combination of research on gene regulation, natural products, biofuels and the discovery of putative fungal pathogenicity factors.

Physics Department Head Heidi Schellman received a 3-year, $665K NSF award for her project “Experimental Neutrino Physics.” Her project studies the properties of neutrinos using we know and what we can learn about neutrinos as probes of science Beyond the Standard Model to address such open questions about the universe as well as fundamental questions including why the Higgs mass has the value it has and why there is no antimatter in the universe.

Distinguished Professor of Microbiology Steve Giovannoni received a 3-year, $424K NSF grant for his project “Regulation of nutrient assimilation” to study cells that compose the “dark matter” of microbial diversity. The study will use a combination of laboratory experiments, mathematical modeling and genome analysis to examine hypotheses about the costs and benefits of regulating nutrient assimilation. This approach will aid in the prediction of behavior of nutrient cycles and will lead to a better understanding of aquatic ecosystems.

Associate Professor Thomas Sharpton with joint appointments in microbiology and statistics received a 5-year, $406K NIH award to support his project, “Impacts of Benzo[a]pyrene on microbiome development across lifespan and generations and the behavioral consequences.” The project tests the hypothesis that developmental exposure to environmental toxicants can alter gut microbiome assembly and succession to consequently result in impaired behavior and cognition.

Physics professor David Roundy received a one-year, $299K NSF grant for her project “Paradigms in Physics: Representations in Quantum Mechanics” to develop an enhanced website giving faculty access to teaching resources and an online textbook for teaching the mathematical skills students need to be successful in advanced physics courses. Physics professors Elizabeth Gire and Corinne Manogue and mathematics professor Tevian Dray are co-PIs on the project.

Research funding is off to a strong start already in fiscal year 2020 with nearly $2 million in grants and awards. Leading the way is Bo Sun, an assistant professor of physics, who received an NSF CAREER Award for $740K for five years for his project “Understand the multiplexing and communication in multicellular sensory response,” which is focused on advancing our quantitative understanding of information processing in mammalian cells. Sun will improve the student experience in interdisciplinary education by developing a hybrid class, Biophysics Discovery, organize an annual workshop for science storytellers to team up STEM students with liberal art students and expand outreach programs to include an emphasis on first-generation college students and students from low-income families.

Below are just a few incoming awards received since July 1, 2019.

Michael Kent received two NIH awards totaling $430K supporting his project “Control and Impacts of Disease of Zebrafish in Research Facilities” for one year. The project uses zebrafish as part of an integrative approach to improve human health. The focus of this research is to continue to develop methods of control or avoid certain pathogens that cause the three most common diseases/infections of zebrafish in research laboratories.

Jadwiga Giebultowicz, professor of integrative biology, received a $378K NIH award for her project, “Links Between Age-related Changes in Energy Metabolism and Alzheimer’s Disease.” She will examine factors that impair neuronal energy metabolism in aging and Alzheimer’s disease models that may elucidate ways to prevent or delay neurodegeneration and to identify novel avenues for prevention and therapeutic intervention in Alzheimer’s disease.

Physics Professor Davide Lazzati received a 3-year, $337K NSF award for his project “Combining theory with observation.” The collaboration between Oregon State and Texas Tech University will investigate several major scientific issues through a combination of theoretical and observational research. Lazzati and his team will study a larger, more diverse sample of binary neutron star (NS)- binary neutron star (NS) mergers in order to derive statistically meaningful conclusions about the physics involved since astronomers do not yet know whether the binary neutron star merger GW170817 is a typical NS-NS merger or a peculiar transient. The new class of transients arising from the mergers of black holes with NSs has not yet been studied.