Like so many students, senior BioHealth Sciences major Brett Gill’s intended path as a freshman at Oregon State veered off course. He started out on as a pre-med student, but after he passed out watching a video of a live surgery in a freshman biology seminar, he decided that he did not want to be a doctor. Fortunately around this time, a friend mentioned how interesting his pre-pharmacy studies were, prompting Brett to explore course requirements. He was soon convinced. A pharmacy major he would be! 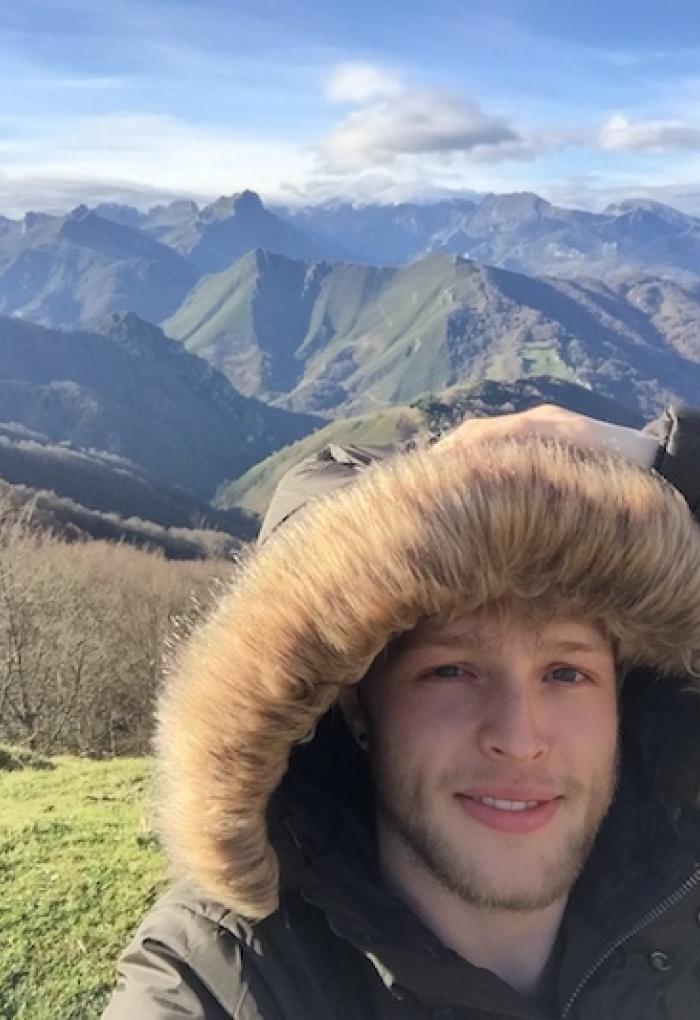 Brett hiking in northern Spain and above, in Mallorca with Raissa, a friend from Barcelona.

That was until he went to Spain. Thanks to a wonderful Spanish professor, Emily Mallowitz, his sophomore year, Brett discovered a passion for languages and travel which led him to study abroad at Universidad de Salamanca in Spain for a whole year, during which he did no science or pharmaceutical work at all. Instead, he immersed himself in the new culture, became fluent in Spanish in six months, resided in two homestays – one with an elderly woman and her dog and a second with a middle-aged couple who housed several international students, taught English and took classes in Spanish language and culture. In fact, he took so many classes that he earned enough credits for a second major.

But when Brett returned to campus, his year abroad caused him to “question everything.” Should he switch to some sort of international career, business, other majors? After a period of not-always-pleasant introspection and reaching out to family, friends, and advisors, he found that his original love of healthcare resurged and he recommitted to BioHealth Sciences as a pre-pharmacy major.

Now on the cusp of graduation, recently inducted into the prestigious Phi Beta Kappa Honor Society (“a big surprise!”) and headed into OSU’s Pharm D. program next year, Brett is confident that he made the right choice. He hasn’t forgotten his love of Spanish, and dreams of doing a graduate internship abroad as well as eventually being a pharmacist in a community with a large Spanish-speaking population.

Brett uses his Spanish on campus frequently as a campus tour guide who specializes in diversity tours for underrepresented students, a job which he loves. He has participated in outreach and recruitment events both on and off campus for prospective students and their families. Recently traveled to Hillsboro High School for their Latino Night, where he interacted with many families who were un aware that college could be a viable option for their children.

Brett originally decided to attend Oregon State partly because of his dad, an alumnus and enthusiastic Beaver fan and partly because he fell in love with campus during a springtime visit as a high school senior living in Colorado. He found campus “full of blossoms and red brick buildings – which for some reason I really liked.” It was only gradually, after starting his studies, that he learned of Oregon State’s strong reputation for research, not from a marketing brochure but from his professors, who were constantly integrating current research topics into their teaching.

“My chemistry professor, Daniel Miles, talked about a compound he synthesized in his lab. Microbiologist Kim Halsey and my physiology professor Devon Quick were always connecting the course content to current research in their fields. And my physics professor K.C. Walsh even talked about his research in physics education – his lightboard studio is really cool!”

In these ways and more, Brett was exposed to the energy and nature of scientific research. He didn’t pursue a position in a research lab due to his busy schedule pursuing other passions, from Spanish language and culture to being a campus tour guide to getting involved in student clubs such as the International Language Club, the BioHealth Sciences Club and the Pre-Pharmacy Society.

Brett is grateful for his family’s support and for the OSU Finley Academic Excellence Scholarship that helped to fund his time here.

Gregarious, smart, personable and bilingual with a passion for healthcare and for helping those underserved, Brett is enthusiastic about the doors that have opened for him at Oregon State. Its global impact was driven home for him when he was hiking in the mountains near a tiny town in northern Italy during his year abroad. An OSU alumnus spotted Brett’s baseball cap and shouted, “Go Beavs!”