Physics undergraduates had an outstanding summer in 2017! At least 20 physics undergraduates engaged in significant research projects all over the country, including physics labs within OSU. A few of the places where students have conducted research include Oak Ridge National Laboratory, Intel, University of Minnesota, Stanford University, Johns Hopkins University among others.

Gregory "Mirek" Brandt received a fellowship to study at the Weizmann Institute in Israel. Brandt also received the Goldwater Scholarship for 2017, the top undergraduate award in the country for sophomores and juniors in science, technology, engineering and math (STEM) fields.

This level of participation in cutting-edge research by undergraduates is very impressive and demonstrates that OSU physics students are ambitious, passionate about the subject and very well prepared academically to hold their own in the nation's best research centers. Some of their research has been presented at the undergraduate research symposium and SURE Science poster sessions. Students will continue to present research at seminars in the physics department throughout the year.

Hassan Alnatah developed a protocol with Bo Sun of OSU Physics to construct a 3D printed cell model based on confocal imaging.

Hazel Betz did an internship in the Fault Isolation and Failure Analysis Laboratory at Intel in Hillsboro, Oregon. She analyzed samples with a scanning electron microscope and designed to proof-of-concept experiments to improve device probing characteristics, and developed and documented procedures to improve the process.

Mirek Brandt received a fellowship to study at the Kupcinet-Getz International Science Summer School at the Weizmann Institute in Israel. During his eight weeks with Dr. Boaz Katz, he modeled the spectrum of type 1a supernova, given some arbitrary explosion model. The intent is to eventually test the supernova detonation models studied by Katz. Mirek highly recommends the program. He returned to OSU to take up his Goldwater Fellowship in the lab of Matt Graham in the Department of Physics. A very busy summer!

Katelyn Chase participated in an NSF-REU program at the University of Utah in the group of Michael Vershinin in the Physics and Astronomy Department. She studied the effect of Trimethylamine N-oxide (TMAO) on the stability of kinesin-1 motor proteins as a function of temperature.

Patrick Flynn solved partial differential equations with applications to bacteria migration, with Arnd Scheel in the Mathematics Department at the University of Minnesota.

Ian Founds studied students’ use of the chain rule in thermodynamics with physics faculty Paul Emigh and Corinne Manogue of the Physics Education Research group. Founds presented his work at the PERC conference this summer.

Cassandra Hatcher had a SURE Science Fellowship to work with Davide Lazzati in the Department of Physics at OSU. She studied X-ray polarization from Compton scattering in asymmetric supernova remnants.

Garrett Jepsonworked in David Roundy’s group in the OSU Physics Department. He evaluated a new Monte Carlo code written in rust for use in studying fluids. He also worked with physics professor Guenter Schneider using machine learning techniques to locate and identify cells in a cell microscopy image. He received a SURE Science award to support his work.

Ryan Lance developed a new analysis for optical spectroscopy of thin films in Janet Tate’s lab in the Physics Department at OSU. He received an honorable mention for his presentation at the university's Summer Undergraduate Research Conference. Ryan shows his award in the photo below. 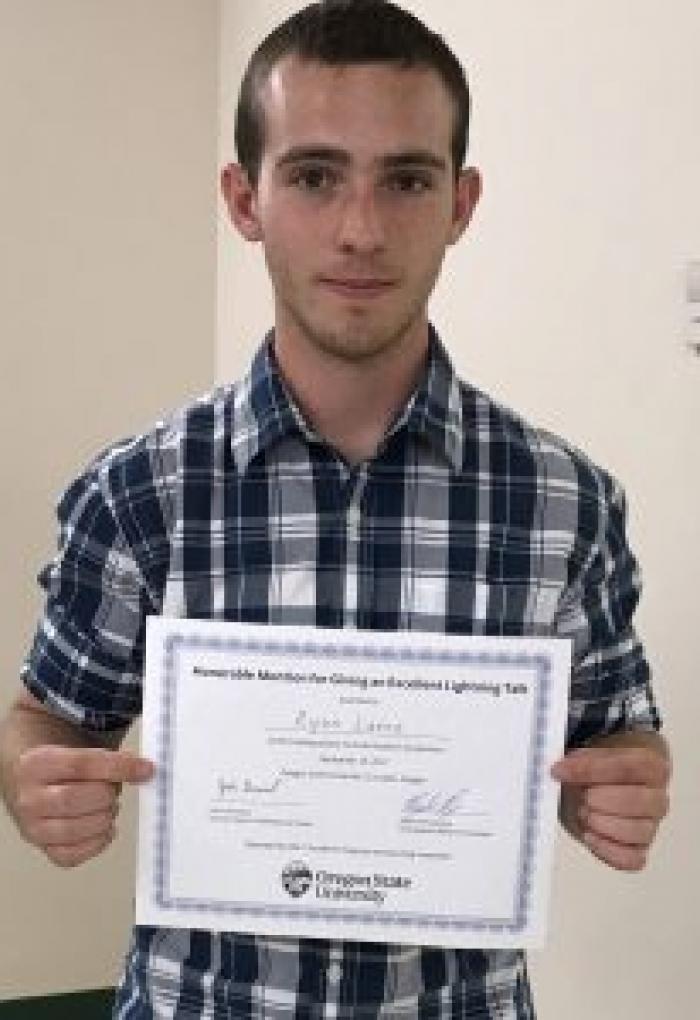 Chris May, working in David Roundy’s group, developed an improved code for studying the Weeks-Chandler-Anderson fluid.

Dublin Nichols is a College of Science SURE Science scholar. This summer, he built a microscope rig that enabled him to stack atomically thin crystals for further study. He worked in the lab of Ethan Minot in the Physics Department.

Gabriel Nowak had a Science Undergraduate Laboratory Internship (SULI) in the Atomic, Molecular, and Optical sciences group in the Chemical Sciences Division at Lawrence Berkeley National Laboratory (LBNL). He investigated laser-generated nanoparticle array formation and the dynamics of charge transfer in the process.

Nikita Rozanov characterized the interaction between cytochrome c and 3-mercaptopropionoic acid (MPA) coated gold nanoparticles using molecular dynamics simulations. He worked under the supervision of research scientist Caley Allen in the group of Rigoberto Hernandez at the Johns Hopkins Department of Chemistry. This work was part of an NSF-REU at the Center for Sustainable Nanotechnology.

Abe Teklu was part of a DOE-funded program at General Atomics in San Diego with mentor Richard Moyer. Abe analyzed divertor footprints in the DIII-D tokamak to determine whether computational models describe the divertor region accurately. Below is a picture of Abe (right) gathering data in the tokomak. 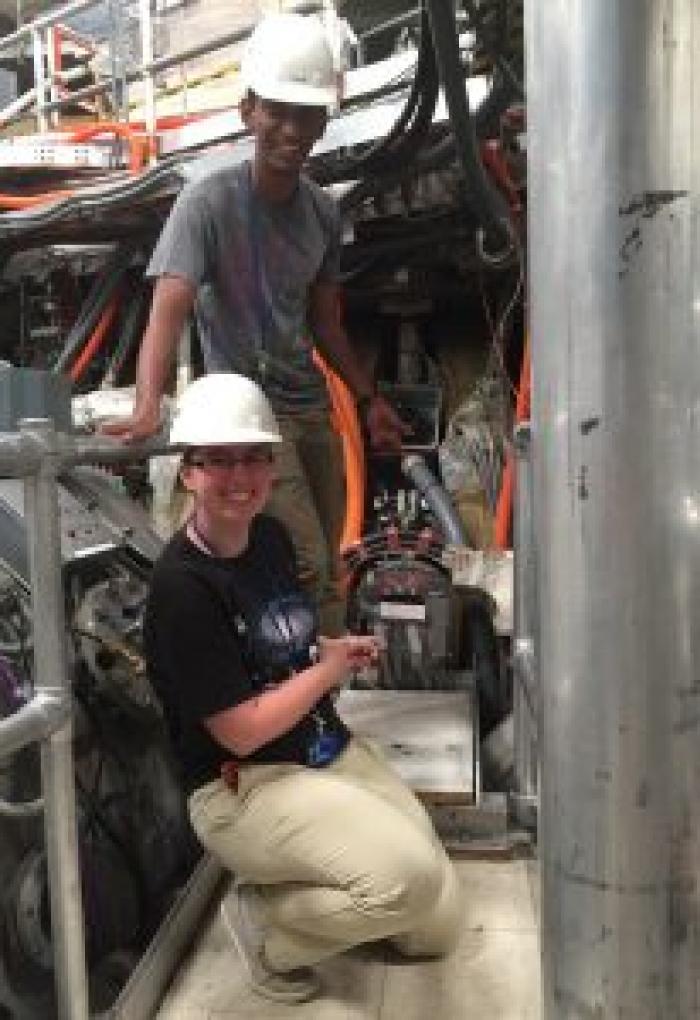 Attila Varga had a SURE Science scholarship to work with Kathy Hadley in the Department of Physics on modeling rotating star-disk systems.

John Waczak tested and developed a model for the dynein motor protein worked in David Roundy’s group at OSU. Physics faculty also worked with students from other disciplines. Weihong Qiu and Bo Sun, who both study biological physics, hosted SURE Science scholars Youngmin Park (Biochemistry and Biophysics) and Theresa Dinh (Biology) in their labs this summer.

Read more about our physics students: Find out why physics deserves its reputation as a career with one of the lowest unemployment rates.