Patrons at the popular Café Yumm! near campus enjoy their food with biodegradable plastic silverware developed in an OSU lab by chemistry major Jason Sandwisch.

Plastic and plant may sound like antithetical materials. However, for the last few years plant-based biopolymers have been emerging as the new building blocks of plastic. Sandwisch, who will soon begin a PhD in chemistry at the University of Washington, hasn’t yet met a chemistry problem that doesn’t inspire him to seek a solution.

Chris Vitello, the CEO of EcNow Tech approached Sandwisch’s research mentor Dr. John Simonsen in the Department of Wood and Engineering with the problem of manufacturing biodegradable plastic utensils from plants. Wondering if it could be done, Simonsen instructed Sandwisch to look for the right chemical formula. Within its offices in Corvallis and Albany, EcNow Tech develops and markets recycled, reusable and compostable products for events, consumers and businesses.

“Dr. Simonsen’s approach is to say, ‘Here is a problem. Run with it.’ He has graduate students who work on similarly difficult problems. Really being able to dive into research and contribute has taught me a lot," said Sandwisch.

Working as a research assistant in Simonsen’s lab and as a chemical engineering intern in EcNow Tech, Sandwisch used an industrial grade extruder to make the plant-based material in the lab. He then plunged into the arduous and exciting process of implementing design and putting together the industrial grade production line in EcNow Tech to ensure that the manufacturing process made the same blend of organic polymers that was produced in the lab. Finally, the material was put into a machine to churn out biodegradable plastic bottles and utensils.

In his own department, Jason has proven himself to be a physical chemistry whiz after conducting in-depth research in four different labs, co-authoring articles for publication and excelling in the toughest and most advanced graduate-level physical chemistry courses.

He is receiving recognition at the national-level for his talents in physical chemistry. Sandwisch won the American Chemical Society’s 2017 inaugural undergraduate award in physical chemistry for which he was nominated by Associate Professor of Chemistry Chong Fang. Sandwisch is an undergraduate research assistant in Fang’s laboratory where he conducts ultrafast laser spectroscopy experiments on condensed phased proteins and small molecules of interest.

“Jason is a talented student who embraces a challenging subject with passion and diligence. From quantum chemistry classes to molecular spectroscopy research in several labs including mine, he has shown a sharp focus and clear goals from early on, which led to his excellent grades and many other achievements,” noted Fang.

At OSU, Jason has received numerous awards for his academic performance, including the Merrill Family Foundation and the Jesse Hanson Scholarships. 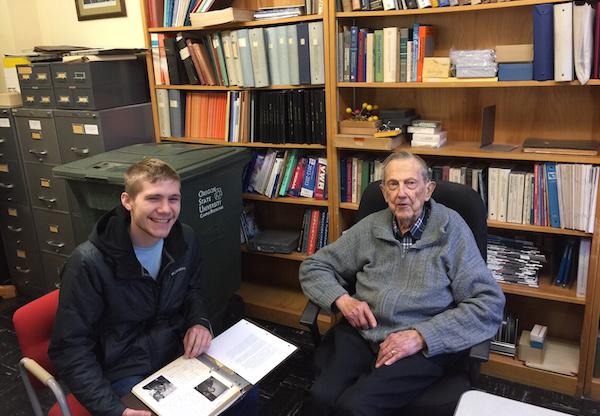 Sandwisch has benefited from the rare experience of being mentored by two of the most experienced chemistry professors at OSU—Ken Hedberg and Joseph Nibler. He learned advanced electron diffraction methods in the lab of 96-year-old professor emeritus Hedberg, who is an expert in the area of molecular structure and intramolecular dynamics.

“Dr. Hedberg loves what he does. Even after 60 years of research he comes in excited and upbeat about work every day. Work is his hobby. He has shown me work doesn’t have to be work,” said Sandwisch.

He got his first taste of spectroscopy techniques and research—a seminal sub-discipline of physical chemistry—while assisting Nibler on a project. Nibler, who has taught chemistry for nearly five decades, has inspired Sandwisch with his pedagogical advice and vast knowledge of spectroscopy research.

Sandwisch's passion for physical chemistry research stems not just from his lab experiments, but also from the countless conversations he has enjoyed with Hedberg and Nibler “about all things to do with physical chemistry.”

“Talking with two great mentors and researchers has been really special. It has influenced me and molded me into someone who can handle challenges in physical chemistry and quantum chemistry,” explained Sandwisch.

Sandwisch is grateful to his science mentors for instilling in him a love for science within a completely supportive environment. “I think they pushed me to get the best out of me. But I never felt pressured or overwhelmed by all the research,” observed Sandwisch. As an undergraduate, he quickly found that research constituted critical thinking, trouble-shooting and a lot of hands-on work that made science truly enjoyable. “I found myself wanting to do the work, wanting to get results and understand what was going on.”

Thanks to his extraordinary learning experiences at OSU, Sandwisch has acquired an abiding love for physical chemistry, a subject whose beauty and power he will continue to explore in graduate school and beyond.