Four years ago, Shan Lansing began her undergraduate career at OSU as a wide-eyed freshman from the small town of Grants Pass in rural Oregon. This year, she will graduate with a master’s degree in chemistry, having earned it in just one year and her bachelor’s degree in three.

Six weeks after commencement she will join the class of 2021 at The Ohio State University College of Medicine in the White Coat Ceremony, a symbolic tradition at medical schools nationwide that marks the unforgettable moment one transitions into the medical profession and embarks on a lifelong dream. The ceremony typically includes students taking an oath and receiving their white physician coat.

Before she trades one OSU for another one and leaves the Northwest for the Midwest, we caught up with Shan to hear how she landed here, at this point, and to hear some lessons learned and wouldn’t-miss-it-for the world memories.

Before any new beginning, it’s helpful to look back and reflect. So, “Why science?”

“In high school, my interest in chemistry had to do with my freshmen chemistry teacher, who was very organized, methodical, clear and easy to follow. I have always liked patterns and symmetry, which are so fundamental to the sciences.”

Although Lansing began her education at OSU as a biology major, she quickly changed to studying chemistry, later adding a second major in biohealth science.

“Chemistry is all about problem solving. It provides you with the framework to solve big problems,” said Lansing, with an eye to the solid preparation it would provide for a career in medicine.

“Everything is composed of atoms. So, if you can understand the way atoms function, then you can explain the way anything works,” remarks Lansing. She was hooked.

Lansing credits chemistry with teaching her how to think critically.

“I was able to start doing research early, thanks to my advisor, Neal Sleszynski.” explained Lansing. “My research is in analytical chemistry, with a focus on fluorescent sensors for detecting DNA or RNA. I learned so much: how to write scientific literature, the plusses and minuses of experimental design, and of course, I learned a lot about nucleic acids and biosensors. But what I really learned was how to critically analyze scientific claims.” 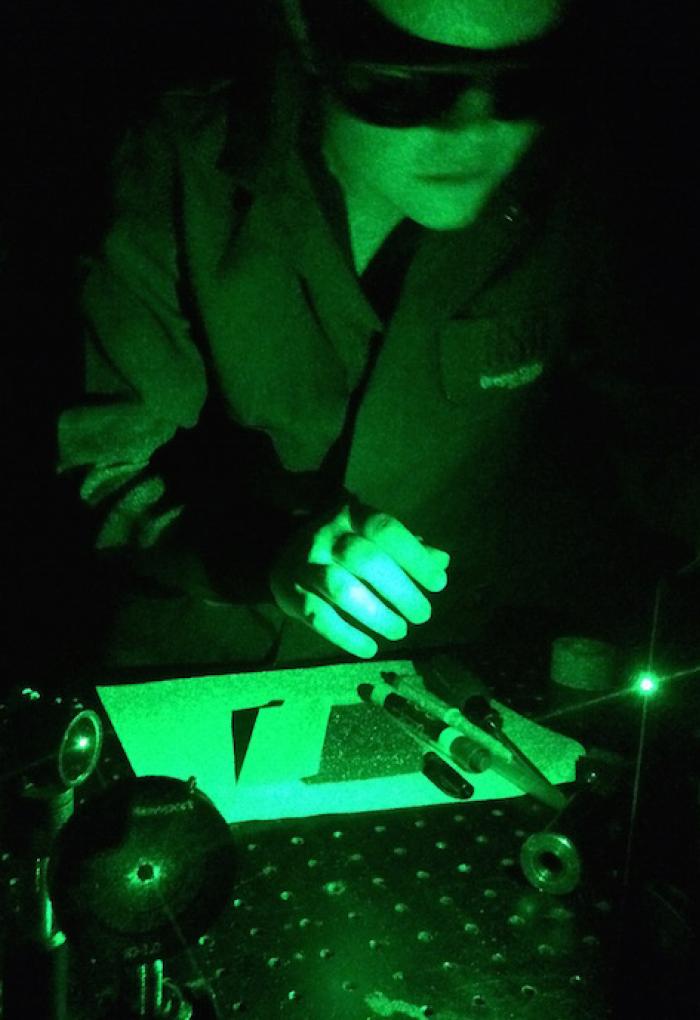 Lansing in the lab with green filter

Lansing applied for URISC (Undergraduate Research, Innovation, Scholarship & Creativity) and SURE Science Scholarships but was not awarded either grant. Persevering, she applied for and received College of Science scholarships, including two Merrill Family Foundation Scholarships from 2014-16, an Anne Runes-Wilson Scholarship in 2015-16, and a Clara and Fred Horne Scholarship For Women in Science in 2014-15.

Lansing was also supported by the Chemistry Department as a Teaching Assistant and served as a College of Science Peer Advisor to undergraduates.

“When I came to OSU, I was so surprised by all of the opportunities at a major university. Coming from a small town, I had no idea. At OSU there are a lot of opportunities to be pushed out of your comfort zone!” laughs Lansing.

She is grateful for the many challenges and opportunities to feel uncomfortable in order to learn new things. Lansing decided to embrace all OSU had to offer and sought out new people.

“Early on I was able to surround myself with incredible people studying amazing science,” explained Lansing. She immediately joined Sigma Delta Omega, the sorority for women interested in science. “Entering college, I didn’t really know how to make new friends. So, joining SDO seemed like an easy way to make 70 new friends!”

Lansing heaps praises on her SDO sisters, a group she found very welcoming and easy to fit in with. “I was surrounded by inspiring students, one did a summer research internship in math at MIT, another who went on to pursue a Biochemistry Ph.D. at Berkeley. I see people accomplishing amazing things and doing incredible work. They are truly the movers and shakers of the science community. They really lift you up. They challenge you to be better.”

Lansing got into research thanks to an SDO member, who is now pursuing a Ph.D. in chemistry at the University of Michigan. To round out her OSU experience, she volunteered with organizations she found meaningful, including AWESM (Advocates for Women in Science, Engineering and Mathematics). They support elementary, middle, and high school girls interested in STEM and hope to empower them to pursue a career in science. 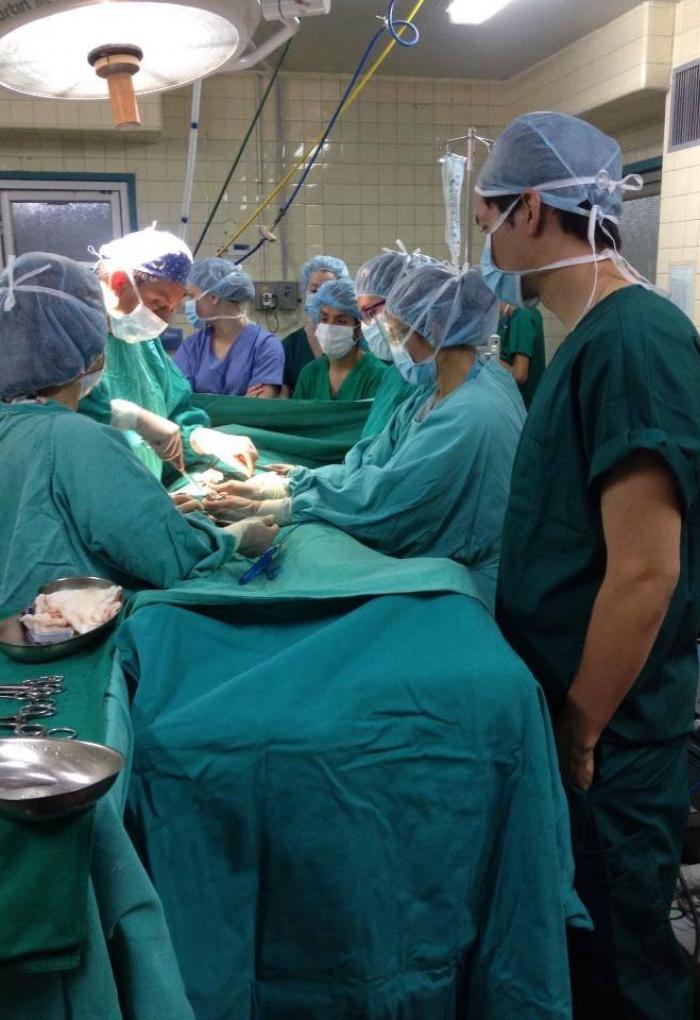 While on study abroad in Ecuador, Shan observed a surgery.

During her three years as an undergraduate, Lansing managed to squeeze in a study abroad experience to Ecuador. She was able to observe surgery while there as part of her program.

Lansing says one of her most meaningful experience was volunteering at Free Clinics, run by Corvallis Community Outreach, a partnership between Free Clinics and emergency rooms in Linn and Benton Counties. Founded in 1972, the volunteer-run organization provides basic acute and primary care to people without Oregon Health Plan or private health insurance.

For Lansing, it has shaped the kind of physician she wants to become: one who is rooted in her community, mentoring young pre-med students as she was mentored, providing care to underserved populations. She also shadowed doctors as part of the preceptorship program in the College of Science.

After spending four years doing research in the lab, Lansing realized that she did not want a life of research.

“I learned a lot about a very specific area of chemistry. And it is important to me to make an impact. But I realized in the lab that it could take 20 years to make an impact or longer. Basic science research is far removed from the patient, which draws me to a career in medicine as opposed to academics.”

Armed with the knowledge that she wanted to help people and improve human health, Lansing was contemplating pursuing a Ph.D. and an M.D. It was at this crossroad in her undergraduate career that she wondered how it would be possible to balance all of that, knowing family was important to her.

She turned to those she looked up to most about how best to strike the right balance between clinical, surgical, research and family endeavors. Those who had an M.D./Ph.D. advised her to actively prioritize what matters most. For Lansing, that was family followed by clinical and surgical work.

That landed Lansing in OSU’s master of chemistry program, which allowed her to pursue research without spending five years working toward a Ph.D. There she would hone her critical thinking and communication skills so she would be better able to effectively convey information and knowledge to scientists and patients.

Completing bachelor’s and master’s degrees in four years is no small or easy feat. Lansing eagerly points to those who supported her journey, one that she says began in fifth grade.

Her fifth-grade math teacher noticed her aptitude for the subject and placed her in advanced courses. That decision enabled Shan to take advanced math and science classes which accelerated her progress and enabled her to take courses for college credit, bringing 96 credits with her to OSU. That enabled her to complete her undergraduate degree in just three years, not only saving her time but also money.

“Many people don’t realize that the University allows students to transfer 15 graduate credits (taken as an undergraduate) to a graduate program. This is how a typically a two-year program can be shortened into one year. It saves you so much time and money,” adds Lansing.

She created a PowerPoint and shared it with her advisor and other students in hopes it would help them navigate a clearer path to getting both a bachelor’s and master’s degrees in four years. If students are interested in pursuing a one-year master’s degree, Lansing encourages them to talk to their advisor and welcomes them to email her with questions at lansings@oregonstate.edu.

Guided by advisor Sean Burrows, Lansing successfully defended her thesis that focused on modifying a sensor that could potentially diagnose cancer before the disease expression but detecting microRNA. From her thesis, she says he learned about the types of cancer diagnostics and the work that goes into developing a clinical test.

Lansing plans to pursue a career as an oncological surgeon and hopes to employ a personalized approach to medicine.

Knowing success is as much failure as it is achievement, Lansing is grateful for the strong support of her parents.

“I am grateful that my parents allowed me to fail. They encouraged me to pursue my interests, to try things out, to be forgiven when things didn’t work out or to settle in when things feel right.”

And, she adds, “I know that a career in medicine will continue to push boundaries for me. I’m really excited for the future.”

Lansing pushed boundaries of her own thinking through her selection of which medical school to attend. She was accepted at both Dartmouth University’s Geisel School of Medicine and The Ohio State University College of Medicine. She critically considered her choices and selected Ohio State. It is not only home of the third largest cancer hospital in the nation, but it will also put her into contact with diverse patient populations at its eight hospitals and a deeper understanding of the health disparities that exist in underserved populations.

“I feel so honored,” said Lansing.

Lansing may be leaving us, but she will forever be part of Beaver Nation.