The College of Science received $12.3 million in research grants and awards in fiscal year 2015-2016, fueling strong growth of 25% since FY14 although down 54% from last year. OSU’s overall research growth during that same period was 10%.

The Center for Sustainable Materials Chemistry, which accounted for nearly one-third of the College of Science’s research funding last year, received a two-year funding increment in FY15 and so did not report an award in FY16.

In terms of the number of grants and contracts, the College was awarded nearly 9% more grants than in FY14, compared to OSU’s 32.4% growth in number of research awards.

Most of the College’s research funding for FY16 was from federal agencies, with the National Science Foundation awarding 50% of the grants, the National Institutes of Health 20%, sub-awards contributing 9% (these funds are pass-throughs of NSF, NIH, DoE grants, etc., where the PI is located at another institution), U.S. Army 8%, other 8% (other federal agencies, industry, nonprofits, foundations), and Department of Energy 5%. 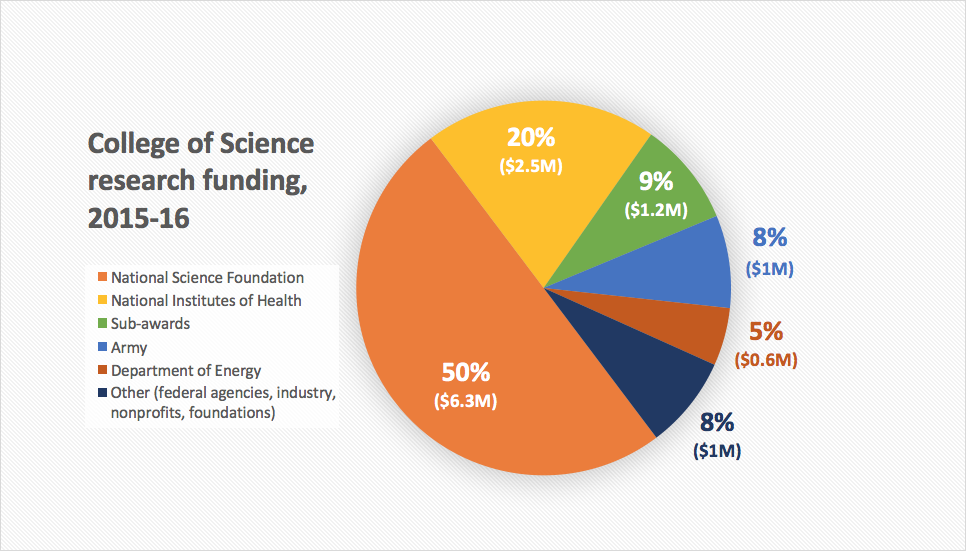 Many of the College’s new grants fund projects in the life, biohealth and marine sciences, showing the broad impact Oregon State science faculty are having on human, environmental and marine health. In addition, mathematical sciences received a major award for research-based teacher preparation.

With government funding for science research limited and competition fierce, the College is making adjustments and investments in grant support for faculty and examining a model for supporting research funding through strategic relationships with foundations, donors, state agencies, and industry.

“Research is at the heart of the mission of our College and at OSU,“ said Sastry G. Pantula, dean of the College of Science.

With this increased grant support, the goal is for more faculty to submit more high quality proposals and have more funding success.

Federal funding can have a domino effect across many types of organizations that fund science with many welcome side effects, according to a recent study published by PLOS One. The results suggest that federal research investment positively influences science funders, which are all part of a larger ecosystem.

Although federal funding rates saw historic lows, the Senate approved another $2 billion boost in 2017 for NIH, a 6.2% increase to $34.1 billion. This is the second year in a row that the Senate has slated the agency for a large increase after 12 years of flat budgets. The bill also includes $1.39 billion for Alzheimer’s disease research, a 40% increase. We are appreciative of our congressional staff for their support for federal funding for research and workforce development.

Congratulations to these faculty who received grant funding of $1 million and above, an impressive feat given the competitive climate for federal funding.

The grant amount includes awards to faculty who are currently supported by the prestigious NSF CAREER Awards—the NSF’s top award given to junior faculty members for outstanding research and the effective application of that research in university teaching and education—as well as faculty who were awarded highly competitive funds for various research projects, ranging from support for undergraduate mathematics research to the impact of climate change.

While many faculty received grants in FY16, below are some of the top awards.

Looking ahead Recently, the College has had some positive momentum with research awards totaling more than two million for FY2017.